Sometimes looking in the fridge is like going shopping when you're not hungry and don't have a recipe.  I pulled out some eggplant left over from an eggplant parm dinner a few nights ago, some rice and seitan than needed a new home, (don't worry, anything with fuzzy green spots got another kind of home), and I had a bunch of good fresh veggies and some salads.


I really wanted to try something different so I started the onions and garlic on a low flame with some canola oil and sliced up half a red and half a green pepper.  I tossed some cumin into the onions and let that cook down for a few minutes before tossing in the peppers.   A few minutes later in went the mushrooms I just sliced up.


While all that was sweating down I sliced the breaded and baked eggplant and since it was on the dry side took some of the broth from the seitan bowl and put that in a non stick pan and added the eggplant to first steam, and then as the broth evaporated, crisp up a bit.


I sliced the seitan and heated some canola in another fry pan.  When that came up to temp I added the slices and just let them sear up.  They went from being soft and light brown to seared on the outside and soft on the inside.  The only seasonings were a little salt and pepper.  (Same in the other pan).

I heated up some Daiya with rice spread out on the burrito, nuking it for 70 seconds, making it nice and soft and melting the cheese.  I finished up some Cheddar flavor, (oh pepperjack where are you?), and mozzarella just to get a nice bit of gooey into the mix.

The cooked veggies went on top of the rice and cheese, then some seitan and eggplant and topped it with some organic baby spinach.  I rolled it up, sliced it and here you go in almost no time flat. 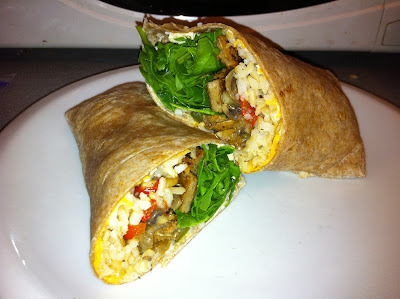 Thank goodness for sealable plastic containers which made this meal possible.