Turkish in Riverhead, NY, on the river at Turkuaz Grill

I know some of you like when I post pictures I take when I'm high so here's a few of New York City.  (Oh, not that high, I'm randomly drug tested ... duh.  But I do look forward to retirement in 75 or 80 years when I'm sure there will be Bong and Munchy bars on every other corner). 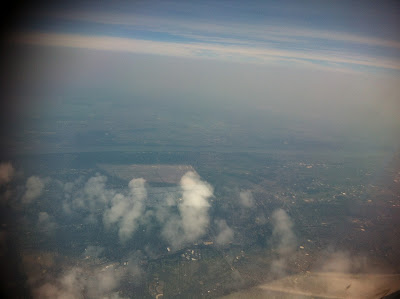 We ended up in the arrival line to JFK even though we were headed to Westhampton, (KFOK), and after slowing down, speeding up, turning lengthy racetrack vectored patterns over New Jersey I thought I'd entertain myself whilst looking out the window for traffic, (ever vigilant in straight and level flight), at 11,000 feet and snap a few pics of my house. 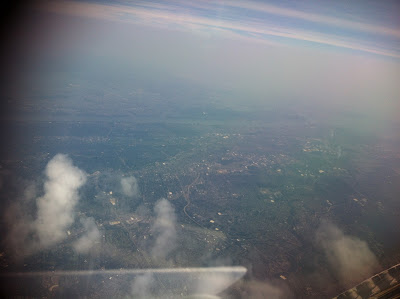 You can plainly see where I live.  Upper East Side of Manhattan.  Well, I can see it.


Our first stop in Riverhead was at the one and only health food store, The Green Earth Natural Food Market.  It has a modest selection of items that I might be able to use but most notably missing soy (or other) milks from the fridge and no Daiya cheese.  Without my two go to items what could I get?  A smoothie.  I just told the proprietor to mix some fruit, a banana, veggies and some greens and this is what I got.  Not bad at all but for nearly 10 bucks, wow.  All the same, better to have a ten dollar smoothie made with organic fruits and veggies than a Diet Coke anyway.  I don't mean to say there's nothing of value here, just that whilst on the road there was less of what I needed for my cooler bag.  There is a Cafe Menu and Smoothie Menu online but I didn't see anything obvious in the store hanging on the walls.  There were two hot crock pots of soup and although they smelled good enough, to be honest, they might have benefited from a swipe with a wet rag.  I might have just missed the late afternoon soup rush but still.  I know a small business, especially a Health Food store on the East End of Long Island must be a struggle.  I'm glad to support them with my smoothie money and perhaps one day will make it back for something more substantial.

Whilst waiting for my smoothie I asked where one might procure a decent vegan meal and was told the Athena Grill might be able to serve up a decent plate of grilled veggies.  (I personally consider this an oxymoron and an insult to and by a chef).  I wasn't thrilled but then the proprietor of Green Earth suggested a Turkish place next to the Aquarium.  In case you didn't know, in Greek, that means "Fish Prison."  Knowing a bit about the history between Turks and Greeks I thought it worth a go.

Perhaps there would be fireworks.  After following the GPS around in a few circles, (in a pretty small town no less), we fount this: 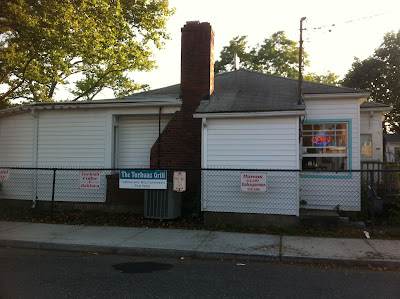 It's actually the side of this: 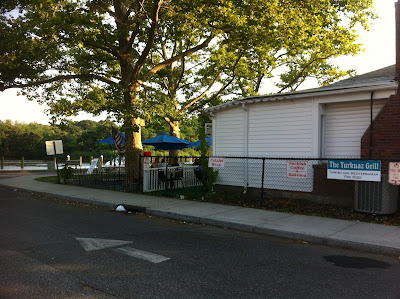 And if you look there are outdoor tables under umbrellas and a really nice river to look at. 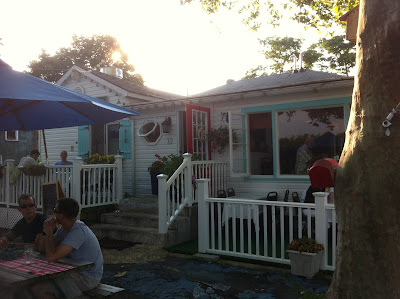 Since I used to live on the water and my flying partner was from Cincinnati and didn't have as much water gazing in his logbook as I, this was my view.  Still, much nicer than the side of the building. 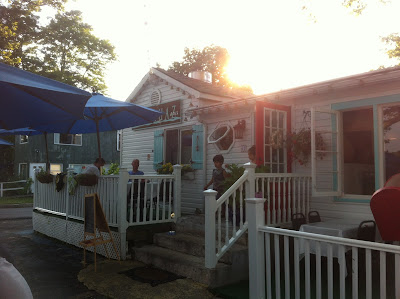 The menu had a few possibilities and although the Babaganoush has yogurt, (no surprise), so does the Hummus.  I asked the waiter, "Really?"  He said, "Sure!"  Huh.  OK, so I explained the vegan thing to him and out of the few things he suggested only one had Feta cheese, which I queried him about and he said, "Sooo, no."

I got the Eggplant with Tomato Sauce ... 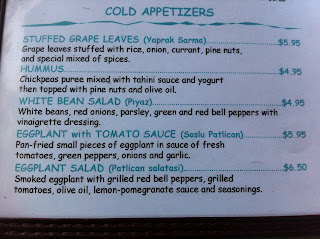 The Falafel wrap with no yogurt sauce.  (It still came but on the side in a plastic container). 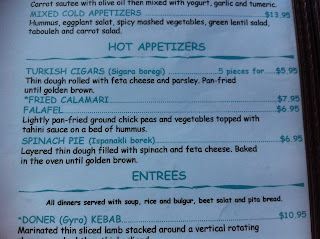 and the Spicy Mashed Vegetables. 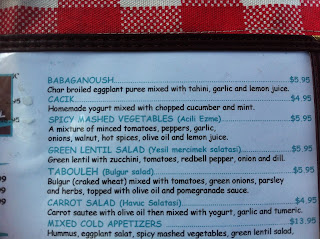 This was my favorite dish of the night.  It was the Eggplant dish.  It had a bit of garlic but a really nice hint of sweet.  I liked the soft chunks of eggplant, (I don't like when eggplant has a hardness left in it), and the other veggies, while very well stewed, still held their shape.  The only thing I wish was that there wasn't so much oil laying on the bottom as you can see 2 pictures down. 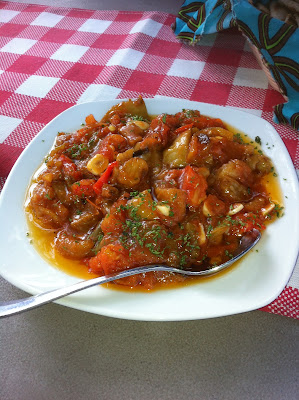 The Spicy Mashed Vegetables were also good but nothing over the top.  The main spice came from the raw garlic and the texture was like a nut paste.  I thought it was a decent enough spread for the pita.  I would have liked it to really pack a wallop in the spice department and when I asked for hot sauce they brought me the traditional hot sauce of Turkey, apparently, Trappy's Louisiana Hot Sauce.  I would have preferred a Schrug, or other mid eastern, southeastern Europe chili based sauce. 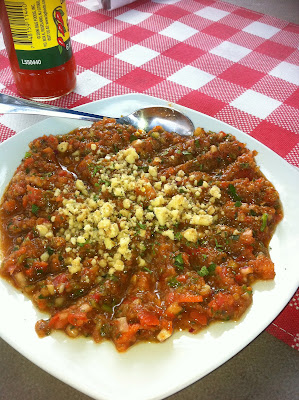 The Falafel was good, certainly above the barre, but could have used a bit more spice.  I enjoyed that it was cooked a bit longer than most and had a decent crust which added to the texture of the bit.  I got nervous, however, when the plate was initially put before me, and saw the white sauce.  I actually took the plate inside and was assured by more than one person, including the chef, that it was just Tahini and contained no dairy at all. 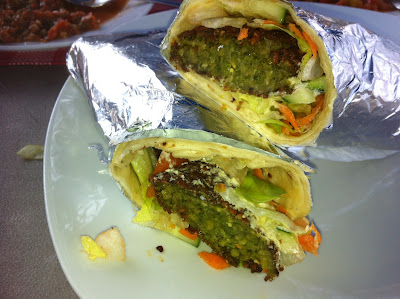 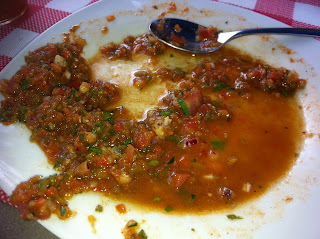 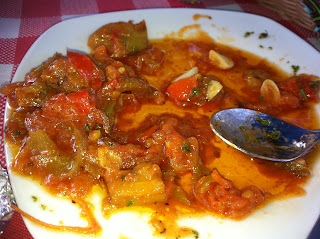 The inside of the place has a warm efficient look to it with hard backed chairs and yet I felt good when I was inside.  I don't know how to describe it.  I wouldn't have minded eating inside had the weather been a bit crisper. 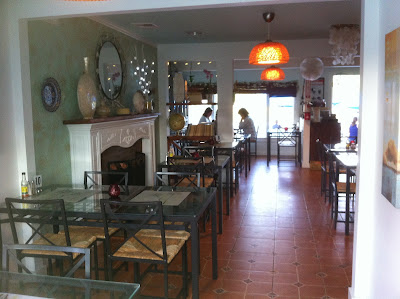 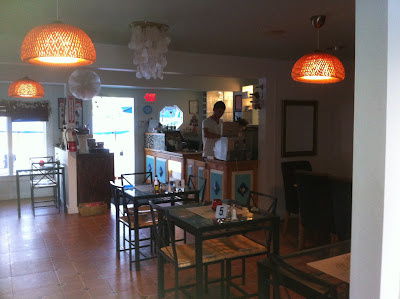 On the way to the men's room I passed by the fridge and looked at the ingredients in both the whole wheat and regular pita's and they are both made without milk. 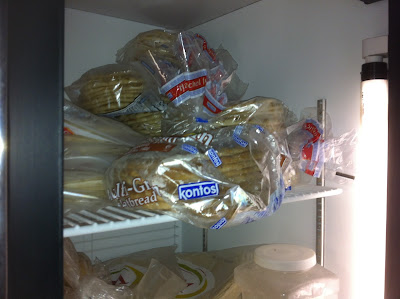 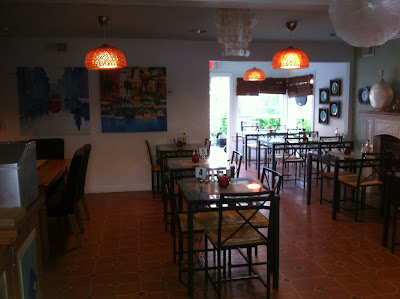 I was hoping to eat for a bit less but with 2 apps and a wrap I guess this isn't bad.  So close to the Hamptons I guess this is a bargain.  There was certainly enough food for the money. 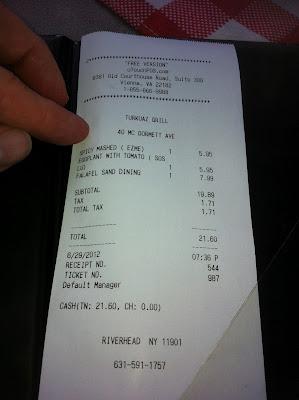 Here's a better shot of the restaurant.  The river runs to the left. 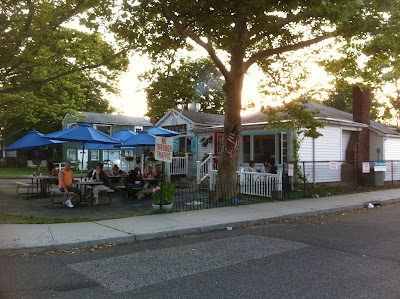 On my usual expedition to the local food store, (Wild by Nature ... which I first discovered in Palm Springs, CA and apparently has a few locations in New York), I came upon this new brand of Ice Cream.  So many flavors and most importantly the word VEGAN predominantly displayed on the container.  I didn't try any as it would have all melted in the fridge compelling me to add it all to my 4AM cup of coffee turning it into a 1200 calorie breakfast so if anyone had tried it please let me know your thoughts.

So much for the adventure in the Hamptons. 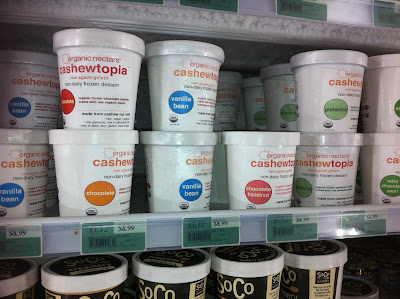