I was fortunate to have a layover for a few days in Philly and since I had the cities newest vegan fast food place on my radar for months it was a no brainer.  A short walk from the hotel and 20 minutes on the train ($5 each way but if you buy it at the downtown station it's a buck less), and a short walk on the other end and I was standing in front of what hopefully will be ubiquitous in the future.  I do want to mention that Nicole, the owner of HCV, had spoke on the phone a few times and when I introduced myself, she insisted the meal was on the house.  I always pay for my food when I blog, not that anyone is throwing food at me when I'm NOT blogging but I'm just saying' here, ok?

I think that was called a teaser.  I just wanted to show you what happens when you ask.  I was at the Embassy Suites and talked to the waitress, (whose sister happened to be a vegan), about what I wanted.  This was one of the breakfasts.  On another day though, a different chef was there and my waitress wasn't.  I went up to the omelet line and ordered my meal.  I'm watching and see him pour something on grill.  When he gives me my food I asked what it was ... yup, butter.  Then the chef who made this dish below heard what was going on and stepped in.

Ya always gotta ask.  Apparently when I said no dairy it didn't ring the chef's bell.  Okay.


OK, I know, I have work to do.  On to Hip City Veg.  I started with the sweet potato fries which were as good as any I've had.  I think either they're good or they're not and the barre is set pretty low on fries.  These passed but I could have done without the cilantro black bean dip.  I'm much more of a ketchup on my fries kind of guy.  Then again, I'd eat ketchup off of my fingers if I didn't have fries.  Sometimes the Brooklyn in me just comes out and says hi. 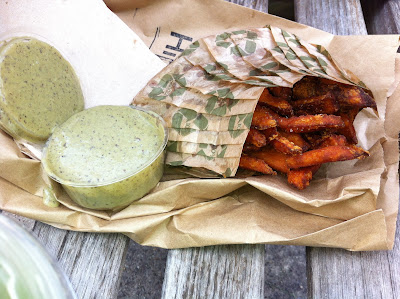 I then went on to the Philly Cheese Steak made with seitan.  I was in ooey gooey heaven with this one.  Both sandwiches had perfectly matched bread and the hero, (ha grinder), was great.  The seitan had a meaty feel and the cheese added a nice fatty mouth feel to the whole bite.  All of the wrapping is biodegradable and marked as such in case you feel that eating 100% plant based food doesn't skew your carbon footprint far enough towards "minuscule." 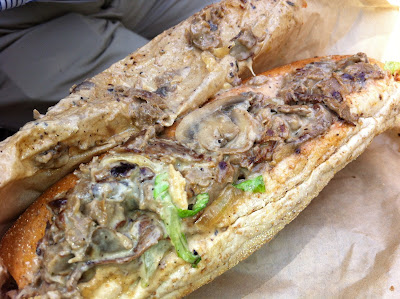 The chicken was amazing.  It all just came together perfectly between the bun and the contents.  I'd like to see a smudge more lettuce for a bit more crunch but ok, so what.  The chick'n had a nice thick crusty crust reminiscent of buttermilk southern fried and the soft crunch soft crunch was actually taking too long to chew because I wanted the next bite.  I'm really raving over this.  The onions, pickles and peppercorn ranch worked incredibly well together.  Texture was also amazing and too close to real chicken to ever need to kill another bird. 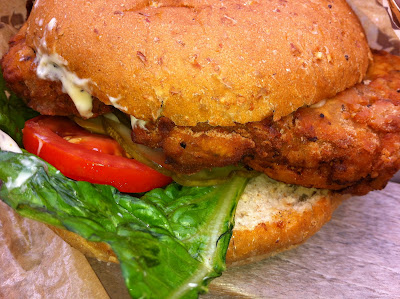 Just look at this sandwich.  The only thing missing is a sink to wash your hands and face when you're done. 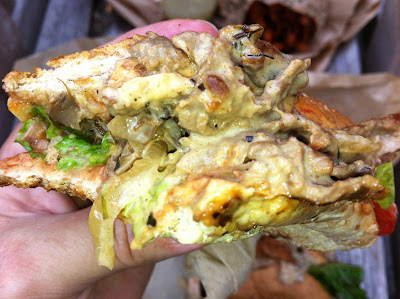 HCV is a small place.  The line was out the door and Nicole told me that the Yelp word on the street is, "Want to go to Hip City Veg?"
"Nah, the lines are too long!"

So Nicole, start cranking the stuff out the door!

There are a few tables but it's not the kind of place you really want to sit and eat at during lunch hour.  People are standing around waiting for their orders or waiting on line to order.  Rittenhouse Square is just down the block and is a really nice place to people watch and enjoy the food.  In a few months maybe not but I'd drip this stuff all over a rental car if I had to. 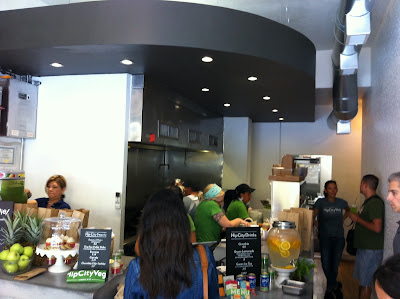 The menu on the wall is pretty limited and right now there seems to be a balance of food offered and diners wanting it. 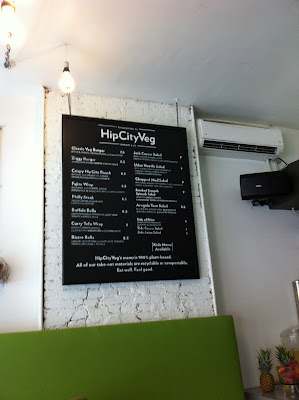 Even if I enlarge it it's still a pretty selective menu. 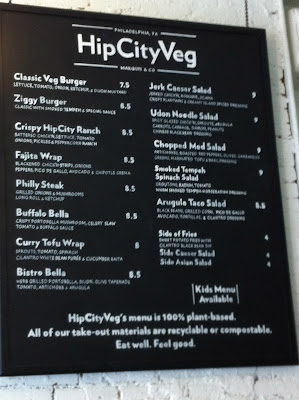 I had the Groovy, (take on a smoothie, get it?) and it was as good a green smoothie as I've had.  They either hit the mark or they don't and this one did.

This is the Classic Veg Burger.  I wasn't impressed.  The burger was just ok and thin compared to the bread as opposed to the chicken which was perfectly sized on the bun.  Nicole told me I should have had the Ziggy Burger which adds smoked Tempeh and special sauce.  It made all the difference in the world but if the burger doesn't bring anything to the party and is a platform for other flavors maybe a different burger is in order.  So get the Ziggy and enjoy the gestalt experience. 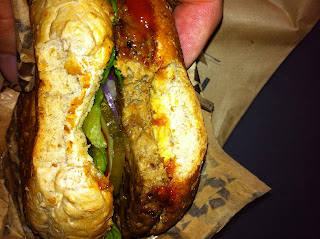 All I have to say is NICE JOB NICOLE.

The Vegan Mentors website, (www.veganmentors.org), should be up and running in the near future. If you have any questions about veganism, need a hand or advice with moving towards a plant based diet or becoming a mentor, for now just send an email to me at:

I'll do my best to help you or refer you to where the info might be and for mentors we'll be in touch shortly.

Thanks for your interest!