96 and counting, here are the 3 titles for the giveaway

As promised, when the blog hit 95 followers I'd tell you the names of the 3 books for the giveaway.


The second is "Waist Away: How to Joyfully Lose Weight and Supercharge Your Life" by Dr. Mary Clifton and Dr. Chelsea Clinton. 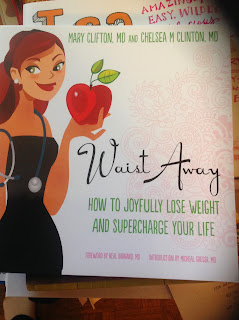 And the third, for which I'll be writing a review next week is "Mind If I Order the Cheeseburger and Other Questions People Ask Vegans" by Sherry F. Colb.


So yes, all of the copies are brand new.  Lets get this blog to over 100 followers and start the giveaway.

Yes folks, a paltry 100 followers will make me feel like I've arrived!  Shot the approach to minimums and greased it on the runway to the sound of the applause in the cabin.

Seriously, 10 more followers and I'll give away 3 books. Two have been on my list for awhile and one I just finished.

And last, would you prefer winner takes all or three separate winners??

Post your comments below ... and thanks for following the blog folks!

Marty
Posted by Marty at 2:36 PM No comments:

Isn't it hard enough ... Or I was so shot in the ass by friendly fire. Disingenuous Zen Palate

It's not really hard.  I've said that enough times.  It isn't hard being a vegan. It does take slightly more effort.  More research online looking for places to eat that have vegan menu items or options.  It does take asking a few more (of the right kind of), questions.  Sometimes a bit of teaching a waitperson or chef what vegan really means, (Yes, I know the last vegan in here said the ... was ok to eat but it's not vegan by definition).  So when you go to a place that you are under the IMPRESSION is vegan, wearing a shirt with the word, VEGAN" emblazoned across the front, you sort of exhale that breath of relaxation and ASSUME your food is vegan.

Fast forward many meals later, many recommendations later about a food that is on the list of world favorites.  And for a moment, just pretend, you are casually looking for another bit of information.  Say the restaurant hours.  And you go to a familiar source, lets say, Happycow.net for instance.  And lets just say while looking for that bit of information you casually notice this ...

All vegan except for the soy ham which contains whey.

"What?" You say as your hands start to tremble and you nearly drop your phone into the sewer, almost tripping in front of a bus as though you'd never used your feet before. You quickly regain your senses and to no one in particular say, "Huh?"

This just cant be, you think, as if sitting in the Vatican and listening to Copernicus explain his crazy theory.

"This must be verified!"

The waitress clearly has English as a second or third language and she must check. And check she does and you know what, it's true.  That ham really does have whey in it.  And all these years Ive been recommending the Autumn Rolls as a MUST TRY ITEM!  Why in the world would you have ONE non vegan item and not mark it.

Look, the truth is I don't care what you put on your menu.  (Well of course I do ... but i don't).  If you want to serve elephant, serve elephant.  (Not really).  But for Dog's sake put a notation there.  Let us know.  An asterisk, a little "V" with a line drawn through it.  How about just the words "Contains whey" in the description??  I felt ... taken advantage of.  How disingenuous.

Now take a look at this picture of the menu at Gobo, another place I enjoy eating at: 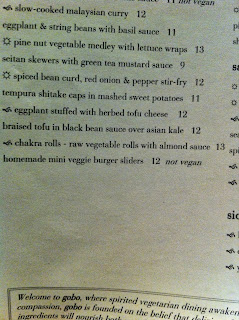 See that last item?  The sliders?  Now truth be told I have no clue why there is such a need to have a non vegan item, (I think it was the egg wash on the slider buns if I remember correctly, and who cares, really), but it's there, for whatever reason, and it's clearly marked.  So unless you're a vegan who misunderstood the word "not", (I dunno, could happen), you ain't eating any animal products accidentally at Gobo.

That's how you do it, Zen Palate.  So, a big thumbs up and kudos to Gobo in the clarity department and a big old Bronx cheer to Zen Palate in the "pulling of the wool over my eyes" department. Yuck.

Email ThisBlogThis!Share to TwitterShare to FacebookShare to Pinterest
Labels: Is Zen Palate disingenuous?
Newer Posts Older Posts Home
Subscribe to: Posts (Atom)
Click on this link and come visit my store on CafePress!