I vacationed in California, ate pork, and loved it ... or ... Golden Brewery Blows it big time and then makes it OK, sort of.

My brother works in Glendale and had one more day at the office before vacation.  His company had some good times at the Golden Brewery and since they have specific items marked as vegan or non-vegan, (some have the V/NV marked since they serve both a vegan and non-vegan option ... more on this later), thought this would be an ideal place for lunch.

Located next to the train tracks in a light industrial area, you drive by a few large buildings where the brewery and bottling operations are and then come to the entrance. 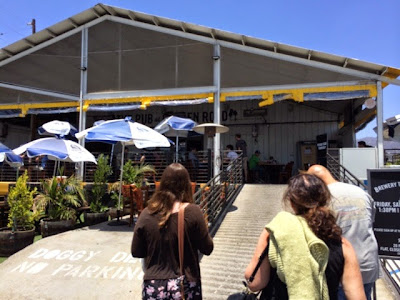 There is an open area for dogs,

(love it), and an outside porch, (pretty substantial with TVs all over broadcasting the world cup at the time), and a cavernous interior with a bar and an "order here" counter. 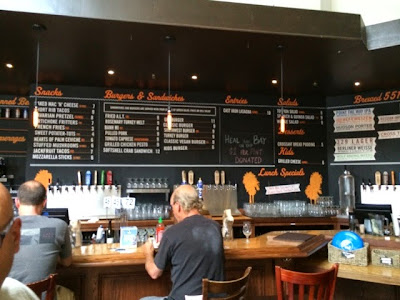 I'm still not sure how that works as after we ordered we were given a number on a stand, (you can see them on the picture of the bar above), for the runners to bring the food but they also seemed to have wait service.  Never got the chance to figure that out.

I am quietly thrilled that the items are so well marked.  You can see the V or NV next to the menu items, some even have both.  No tiny asterisks, no codes, no vegetarian, just vegan ... or not.  To me it means they have their shi, uh, act together.  I order the Jackfruit tacos, which are vegan and I'm anxious to try jackfruit because, yes, jackfruit still terrifies me as a cooking ingredient, the vegan mac n cheeze, and the house-made vegan burger.  Everyone else orders their cheese, crab and what have you.

All the beer is vegan.  This per the counter person and the manager.

The runner comes with the food and here's what mine looks like: 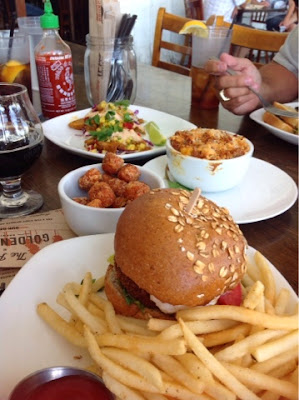 I'm intrigued because in NY it seems the word tacos connotes a crispy, preformed, fried, corn tortilla shell and everyplace else it means a soft white flour (or corn) open faced tortilla.  I enjoyed the burritos except that the amount of filling far exceeded the size of the burrito ... not a complaint at all but just saying, there was a lot of dripping and finger licking.  I think jackfruit is an interesting thing to use in a recipe but not sure it comes close to the pulled pork it aims to emulate.  Still, not a bad dish.

I'm munching on these perfectly cooked fries eyeing the Mac.

The Mac 'N' Cheese was gorgeous ... a full bowl with a nicely browned crust of breadcrumbs and some shredded fake meat.  I took a bite and it was absolutely delicious.  One of the best I can remember eating.  Another heavenly bite and anotheeeeeeerrrrrr ... hmmm ...  ah, what's this?  What kind of fake meat is this?  Hmm ... hey brother (the omnivore), what is this?  Pork?  Pork.  You think it's pork?  Looks like pork.  Shreds like pork.  Ahhh, this is not good.

My wife, who is very adept at seeing my facial color change, took the Mac back to the young lady at the counter.  She returned with the bad news.  It was the non-vegan rendition.  But they were making another vegan one for me.  Well, whoopdy doo.  But here's the kicker ... the young lady at the counter, according to my wife, said I must not have said "vegan".  Really?  Me?  The 5 year vegan.  Nooooo, I said vegan for every dish I ordered.  (I later looked at the check a little closer and it just said Mac N Cheese so I suppose, if everything in life was my fault, I could have read over the check when I signed it and re-stated and re-questioned the order).   So now, instead of apologizing and making it right I was accused of messing up my own order.  Ah, Gen X, or Y or whatever.  Now I'm really not happy.

But, a manager appeared a moment later, card in hand, profusely apologizing.  Her name was Lauren and I really felt as though she cared.  She asked what she could do to make it right, acknowledging that feeding meat to a vegan could never be made right.  I handed her the bill.  A few minutes later she came back saying the entire charge for lunch was being credited back to my card.  It was, under the circumstances, the right thing to do.  She also pointed out the writing on her card, basically, the next time we came back, the first round would be on her.  Also, vowing to examine the incident to figure out what happened and put a procedure into place was the most encouraging thing to come out of the day.  I gave the card to my brother and I hope when he treats a few of his friends to a round, on Lauren, he orders a vegan dish in memory of that nameless pig.

So how do I feel?  Sad, disheartened, disappointed, let down, (need I pull out Rogets?), nauseous?  Nope, not nauseous.  I've eaten plenty of meat in my life and unless it's going to make me physically sick I'm not going to hurl.  I am an ethical vegan and I know this has, (read my Blockheads review of a few years ago when they fed me chicken), and probably will happen no matter how many "Is this the vegan one?"s or "This is the one with the tofu sour cream, right?'s I say.  Now I am thinking; if we make a huge todo over it is that a good thing or is that a vote for the establishment to get rid of the vegan options and the pain in the ass vegans all together.  It cost them about $150 dollars for that mistake.  Perhaps with gratitude for the way Lauren handled the mistake we come out ahead.

But, the vegan Mac, not so good ... and not compared to the other Mac, just a half filled bowl, no crust, fake orange color, and didn't look that appetizing.  It tasted bland and flat.

The burger was pretty good.  I know this is like, "Aside from THAT Mrs. Lincoln, how was the play," but life goes on.  And being a vegan in a non vegan world this is to be expected from time to time.  Just a fact of (at least my) vegan life.  The bun was excellent, perfect crust and soft crumb.  The flavor and toppings all worked together but as in most veggie burgers, and this one being made of quinoa, crumbled and squashed.

Grabbing a coffee to end the meal, and interesting phenomena occured.  There was no soy cream, (a rarity to have any non dairy "cream", and soy creamer DOES have a nicer richer mouthfeel than any non dairy milk I'm usually offered), or non dairy milk of any kind to be found.  Hmm.  A place that attracts vegans and no milk alternative.  Wonders.

Lauren made it right by bringing over some vegan ice cream.  My mom used to do this with her coffee so reminiscing about days gone by, (and lives gone by), I enjoyed the coffee and left with a feeling of, "What was this all about?" 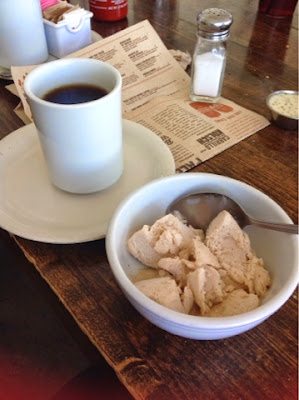 Would I go back again?  If my brother was working and I was in LA and he had an hour for lunch, yes.  With all of the other vegan options out here ... probably wouldn't make my top 10 list ... especially since Kevin's Vinh Loi Tofu is within driving distance and that is my #1 go to place out here and I could probably eat there every day and not get tired of it.  (I did twice and then stopped on the way to LAX for our go home meal).

Now for a few days of relaxation near Carpinteria, to forget life's woes, stresses and the poor pig. 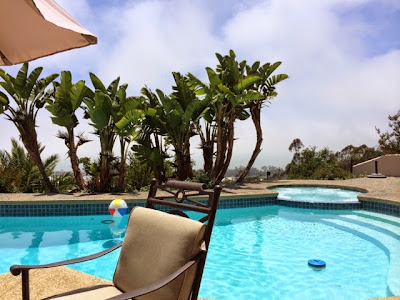