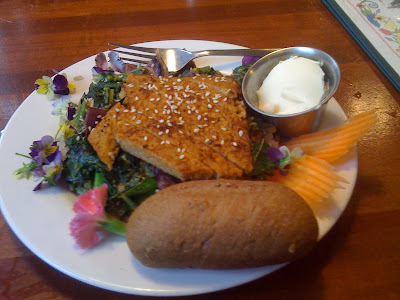 What a welcome surprise when I found myself in vegetarian hell to come across this down to earth bar/restaurant. So many vegan options, soy cheese options, tempeh and homemade veggie burger, (although they were out of the homemade kind and offered up a commercial veggie burger), it was a delight to peruse the menu.

The choice of soups were a Carrot Cashew Cream (vegan) or vegan Muligatawany so I choose the one I hadn't had in years.

The Muligatawney soup was incredible.
Tomato broth, apples, dates, curry, coriander, caraway, and a touch of cayenne were my guesses but the flavor was so incredibly rich and multileveled. I threw in the walnuts and croutons. Great for the bone chilling cold rainy night.

I'm a sucker for onion rings so I had to try the tempura onion and red and green pepper rings w miso dipping mayo, (miso, vegan mayo, garlic, tamari, shallots and something or two else). I didn't get many of the flavors Jennifer my waitress reported were in the dipping mayo but it was still nice on the hot fried food.

The breading was a wonderful cross between beer batter and tempura and the
onions were the hands down winner. I don't think peppers have enough time in a quick fry to get as soft as the onion rings but it was nice to try ANYTHING fried.

Blackened tempeh and curried greens.
Cajun spiced tempeh with just the right amount of sear. Not overpoweringly spicy but you knew they were blackened.
Mixed spinach and collards, red cabbage, and onions in a lite curry gravy over a bed of brown rice. Great whole wheat roll with earth balance. Also there was a small cup of dipping sauce which was a combination of Braggs and balsamic vinegar.

And the NERPS? Man I haven't heard them in so many years.

There is some chicken and fish on the menu so you can let your carnivore friends taste you tempeh and show them how tasty our food is if they insist on not going to your favorite vegan restaurant. Then again, there appears to not be any Vegan restaurants in Omaha. Enjoy what you have, it's pretty good.

P.S. The pics are from my visit in June 2010. I was a bit disappointed that the greens were gritty but the flavor was fantastic. I should have sent the dish back but ate the tempeh and rice and almost all of the greens thinking that if nothing else, there was my vitamin B for the day. Sometimes you just don't feel like the hassle.
This was also the first time I had edible flowers. It was a new addition to the plate and I think it's a novel idea but it tasted like, well, flowers. And why eat something so beautiful?
Posted by Marty at 11:29 AM No comments:

It's always a good sign when there's a wait for dinner and although the window and bar seats were availabe we were both in uniform and wanted a chair to sit back in so we waited all of 10 minutes and a table opened up.

I liked that the menu had a full page of vegetarian and vegan options. I like whe the wIt staff knows what you mean when you say "veganize it please". I like when the menu clearly states that everything can be made vegan on request. These things, when in a restaurant that also caters to the desires of carnivors, gives me the warm fuzzies that I'm going to get exactly what I want.

The choices are numerous in all categories and I chose the Buffalo Wings to start. Wow. Great sauce and perfect sized portion. The wing itself was a flat piece of product made by Delicious Soy in Morrisville, NC. It had a great chewy without being rubbery mouthfeel.
The ranch dressing was cool and flavorful and I lapped up the last drop with the celery sticks. I liked this so much I got an order to go.

My entree was a Philly Fakesteak. Fantastic. A great sub starts with the bread and this was a perfect pallet. Nice crust and good flavor. Locally baked I was told. Fresh and perfect. Soy cheese that was so melted and gooey and grilled onions topped off a delicious "meaty" "beefy" soy protein. It all came together in a perfect rendition of what I remember from the old days.

I ordered a vegan brownie for desert and although it had a good flavor I was a little disappointed in it's uniformity. It was like a flat rectangular brownie shaped piece of cKe with a very fine texture. I think I would add some nuts or icing or a scoop of soy icecream to make it more interesting. That being said I of course finished it.

I also ordered the meatball sub to go. I can't vouch for hat it's like when it comes out of the kitchen but 2 days later coming out of the microwave it was phenomenal.

This is my ideal restaurant when I'm on the road. My carnivore associate had his food choices available so there wasn't any armtwisting and se both left more than satisfied.

I wish there was a Remedy Diner around the corner from me.
Posted by Marty at 6:53 AM No comments: