Native Foods, it's good to be home

A few months ago I was in downtown Chicago. Since my usual stop is Midway it it rare that I get to the city center. I had a few days and my Hotel overlooking the lake had few culinary options.   After sitting at the tapas restaurant with a beer and a menu, querying a helpful waitress and finding nary a vegan option, it was good to realize thatNative Foods was indeed walking distance from the hotel.  Thank you once again Happycow.net


What?  New menu item?  I'm in.  All in!!!  Jackfruit, that mysterious elusive ingredient with cans and jars in my pantry.  Well, I live in NYC so in my pantry drawer.  If you know what I mean.

Island Jack Fritters.  I holy snikiees wish I had a culinary imagination.  These start out with a light crunch, then plenty of soft gooey texture as you press the mass of cooked veggies against the roof of your mouth and bite through the perfect texture of the peppers and onions.  I wouldn't know a jackfruit unless someone put a bowl in front of me and said, "Hey, idiot.  Here's a bowl of jackfruit."  A nice soft heat follows and if you dip in the chipotle aioli you can coat all that crunch with a nice fatty chili flavor without adding much heat.  Give it a squirt of lemon if you wish and you can easily relive the days of conch fritters on the beach of Key West.  Eat quickly though because if you let them sit the crunch disappears. 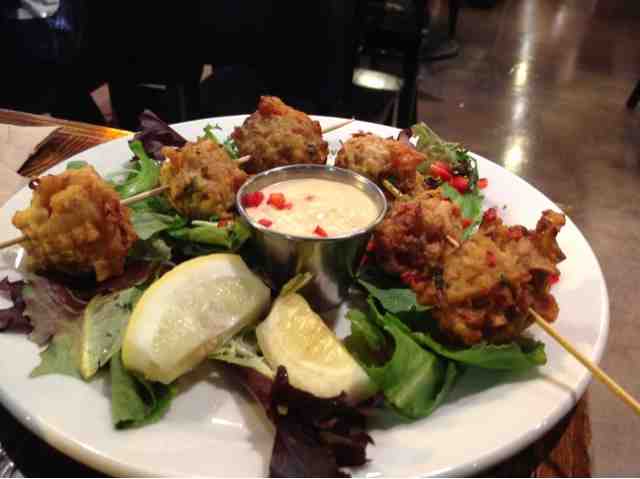 Today was Monday and the Oklahoma Bacon Cheeseburger was the daily special and as a free side I chose the kale.  It's a steamed kale and although there is nothing wrong with the dish it's more steamed than light but most definitely not overcooked.

I'm not sure if it was Charlie Brown who said it or not but sometime in my youth I read the advice, "Never put anything in your mouth that is bigger than your head."  I do believe this burger is bigger than my head. The sliced seitan and bacon slices topped with the onion ring stack might qualify on it's own but there is a whole 'nother side of the bun stacked with lettuce and onions and carrots and tomato and of course shmeared with a shmear of Ranch dressing and BBQ sauce.  It's it looks pretty on the plate and all but you know, somewhere in the back of your mind, that you're not gonna whimp out and eat it with a knife and fork.  Step up to the plate batter. 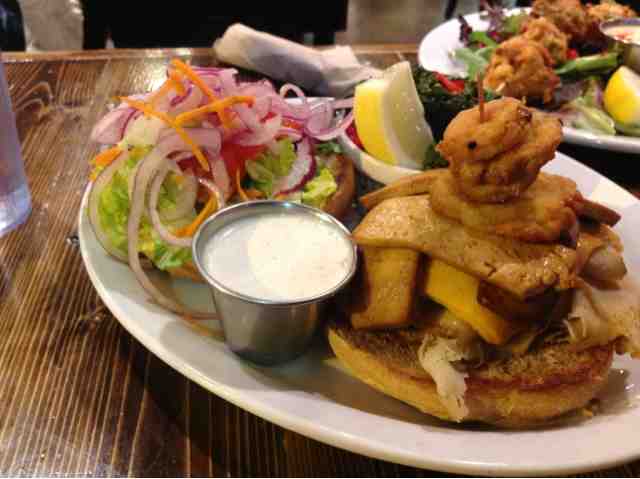 So flip it over you do and you're left with an ingredient jailbreak.   It isn't burger squirt in the traditional meaning.  It literally is every ingredient fleeing for its life. 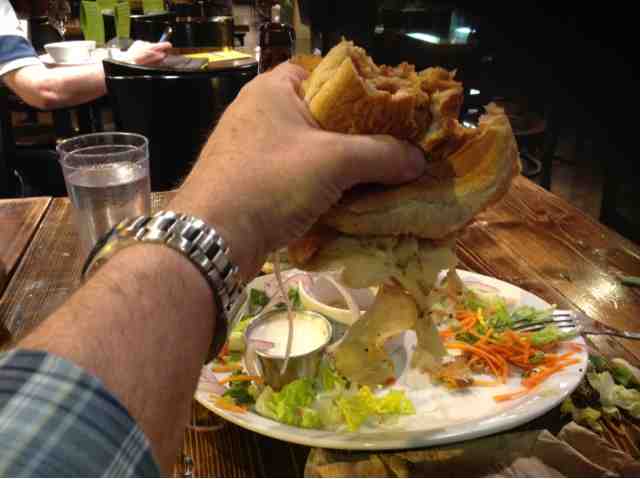 All that being said, it's a great sandwich.  For my druthers, and you know I always have druthers, the seitan is a very light seitan, almost chickeny in essence.  It's sliced thin, which, Caesar, the old man who ran the deli counter many years ago at Danza's Supermarket on Flatlands Avenue in Brooklyn once taught me, makes anything that is sliced taste better.  I make my seitan much heartier with stuff like Bistec, or Kitchen Bouquet, or soy.  Not that this is bad in any way, just not a burger beefy.  You must not give up.  Persevere to reach the center mass of the burger where you're rewarded with the crunch of the onion rings.  Yes, still crunchy!

Shmear on some ranch to bump up the flavor profile and you have a pretty good meal.

It's always nice to not have to ask if this is vegan or that is vegan so whenever I am at a vegan restaurant I feel the tension seeping out of me from the moment I step up to the register to the after dinner belch.  I mean sigh of contentment.

In the interest of full disclosure about half way through the burger I dumped the ranch dressing over in the plate and just grabbed a cop-out fork.  My patience only runs for so long.  <laugh> 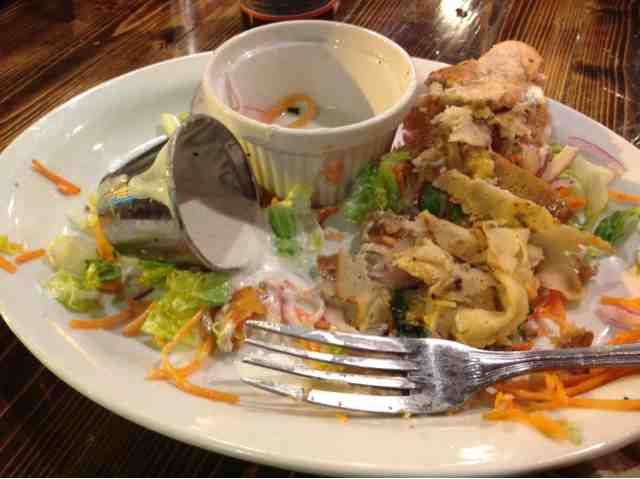