Amusement parks are hard places to do anything with the two words "food" and "health" in the same sentence.  Although it is getting easier, there are still more vegetarian options than vegan.

Last time at SFGA I had a veggie dish at Panda Express.  Now all of the information is based on responses to my usual questions such as, "Is this rice made with water or chicken broth?" etc.

This time around I was sort of pleasantly surprised.  Johnny Rockets is all over the park and although they have a veggie burger they don't serve it there ... but right next to them, 2 fast food counters over, is Ichiban.

I have a pretty cool app on the iPhone called Veggie Passport and it has various veggie phrases in a few languages.  Since everyone at Ichiban seemed to be from Taiwan they all got a kick out of me holding up a screen full of kanji.

I was assured that the 2 starch options, Rice and Noodles, were vegan as were the 3 different veggie options.  The spring roll, although 2.49 for a "side order," of one spring roll is a bit steep and not all that fantastic, added a bit of crunch and you all know of my predilection for fried food. 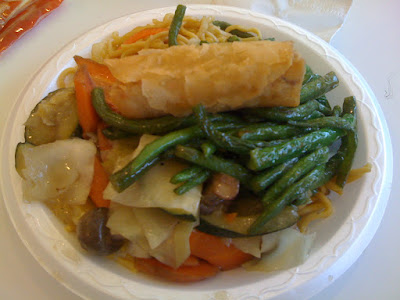 I got the noodles with sauteed cabbage, mushrooms and carrots and the string beans over the lo mein and my daughter got the same but with the steamed broccoli.

For the most part we're not going to use the word healthy but healthier.  The food is pretty greasy and the flavors, of course, are based on the palates of middle Americans.  Rather bland.  Even the prepackaged hot sauce wasn't very.

But, it's a vegan meal in a non vegan land.

On the way from riding Nitro,  out of curiosity I looked at the menu at the New England Hot Dog Company and lo and behold ... a veggie dog.  So again, I got to ask the usual question and the answer was, "Nope, it's just soy and wheat gluten protein."  Wow, a hot dog at an amusement park.  How American!!  Mustard and Sauerkraut.

Now, truth be told I was looking at the second dog, (yes, oink oink, second dog), and you know ... the bun caught my eye.  So with a question mark in my mind I just ate the second dog sans bun and fired off an email of inquiry to their corporate headquarters and I'll let you know the results.
Posted by Marty at 7:51 AM