Daughter requests Mexican tonight so I stoke up the rice cooker, load it with brown basmati, set the timer and forget it.  I think one of the most used small appliances is my rice cooker, at least 2 to 3 times a week.
I have an eggplant, a sweet potato and some zucchini that needs to be used up and there's some pineapple left over from breakfast and a new batch of peaches.  Nothing like eating locally.  I'm sure they're local to someone.  These are all getting roasted with an onion and some garlic.  Rough chopped and drizzled with a  bit of olive oil, salt and pepper and there's a nice side dish.  Not the zucchini though.

I start to saute up an onion and realize I want to put a little sear on the seitan.  I'm using two of the cutlets from a few days ago which is starting to dry out a bit and 2 of the seitan sausages.  I hydrate two kinds of TVP, a small ball shape and the flat oval shape in some boiling water I drop 2 tsps of chicken flavored not bullion into.  I slice up the seitan and sausage and drop them in with the onions. 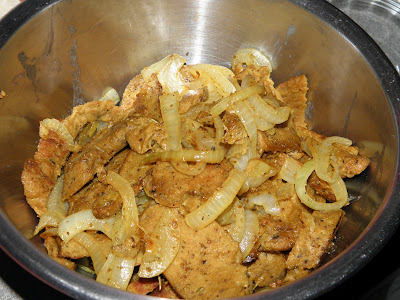 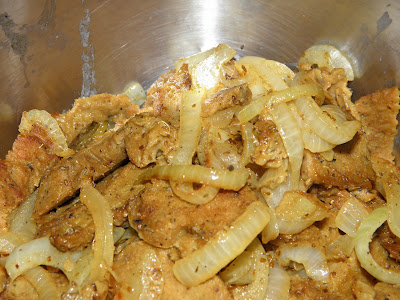 I remove them after a few minutes and toss some celery, carrots and garlic into the pan.  For spices I used S&P, cumin, cumin seeds, coriander, (what the hell), and oregano.  Saute them up and then toss in my shredded zucchini and some broth and a can of black beans with the TVP and some more broth.  This was very brothy and needed a lot of time to reduce. 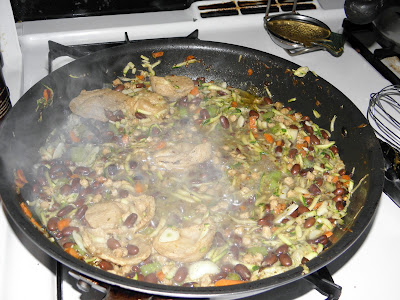 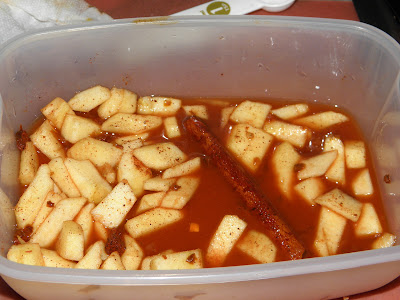 I had originally thought of adding some diced apple to the mixture but sometimes when you cook things just spiral out of control.  I wanted a little bit of heat in the dish.  My daughter is 11 and has started to appreciate a bit of heat but not yet hot.  So instead of just throwing in a chipotle in adobo I marinated the apple in some apple cider vinegar.  I thought it would be a great opportunity to use some of the Achiote paste, (which I have no idea really how to use), and cut of a little Tbsp size square and tried to dissolve that in the broth.  Then I threw in a cinnamon stick for good measure right after the single chopped up pepper.

Wow, was that hot!  So instead of ruining the whole dish it became a chipotle pickled apple.

I added back most of the seitan and voila, another easy tasty weeknight meal.

not bad for something you have thrown together with the ingredients that you found! pretty awesome really!