Sometimes we fly people somewhere, wait a bit, (or a lot), and fly back.  I had about 90 minutes from driving out of the parking lot in a borrowed crew car at IAD, (Dulles Airport), to starting the airplane again.  Dulles used to have a place called Hard Times Cafe in, if I remember, Reston, which wasn't too terrible a drive and served a vegetarian chili on top of spaghetti but it's since closed.

Happy Cow.  Usually it's a complicated analysis, what do I want to eat, what else is there on the menu, yadda yadda, but today it was exclusively a proximity search.  15 minutes away was Lotus Vegetarian.  Never been there.  Uncharted territory.  Never know what you'll find.

As I turned into the street leading to the entrances to several shopping plazas my head was on a swivel looking for this place, annoying the following drivers behind me.  Hey, I'm from NY.  Do you think that bothers me? 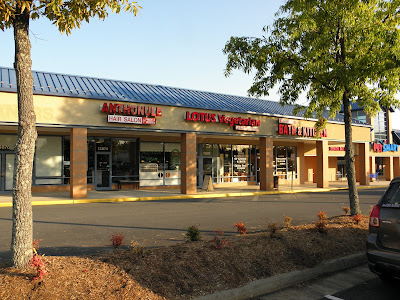 It was a bright, modern place with booths along the walls and tables in the middle.  They have a counter in the rear in front of the open kitchen.  I wasn't sure whether it was a cafeteria style order and then sit but they did have table service. 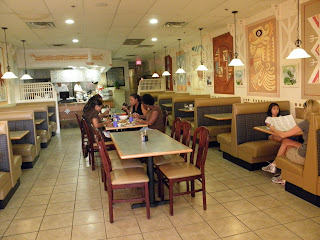 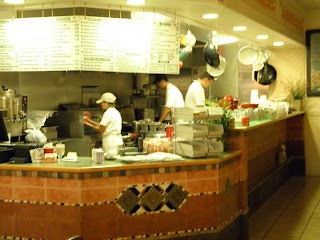 Congratulate me.  I didn't order a fried appetizer.  I got the steamed dumplings, (which were house made), the General's Tso's Surprise, (the most popular dish), and the Lotus Organic Tofu.

I walked over to the kitchen and found out that the proteins all come from California.  I wasn't surprised in Provo when I learned that was the source but outside of DC I would have thought May Wah on Hester St would have had that market wrapped up.  Anyway, I asked to see the different proteins and the beef looked similar to what I've had before but the chicken was a little ball.  I did notice that my steamed dumplings were being boiled.  Ah, we'll see.

The dumplings came and I found them to be thick dough and a bit on the chewy side.  The filling was mostly cabbage and wasn't the most flavorful I ever ate but it was served with a small dish of hoisin sauce which is my ketchup. I dipped and ate every one. 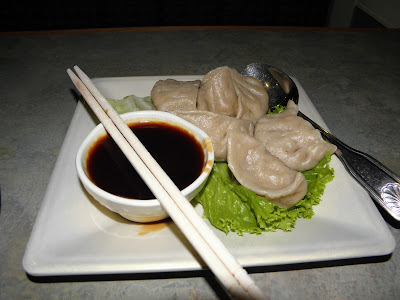 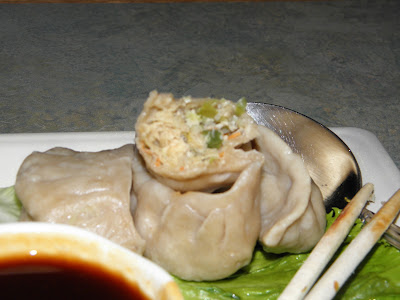 The General's Tso's Surprise was in a very sweet and not particularly spicy sauce, especially with 2 chilis  next to it.  A little chili oil took care of that.  It was almost like a sweet and sour sauce but the soy protein was amazing.  It was scarily realistic and was deep fried.  It had a crunch and mouth feel that was very much like chicken.  And delicious. 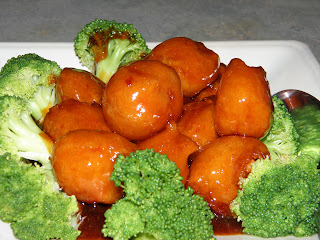 The Lotus Organic Tofu was a very nicely subtly flavored dish.  The lotus root was like a barely cooked white potato with a sweetness.  The tofu absorbed the sauce and the veggies were cooked to a perfect snap crunch.  Perhaps the Basil should have been thrown in at the last second as it was a bit wilted but still had that basil punch.  The sauce was an incredibly rich mushroom sauce and all the mushrooms were deliciously chewy.

I think next time an order of spring rolls instead of the dumplings ... well, sometimes you just feel like chewing down on something so maybe not.  This is definitely on my go to list when I'm dining alone in Dulles or have a quick 30 minutes for a take out meal.  I wish this place had been around when I was based in Dulles all those years ago.

Just a side note, the restaurant has some dishes with egg and dairy however they are clearly delineated on the menu