Another thrown together dinner

I don't know if I should have a "recipe" or "meals" section.  Let me know if you'd like that.

So I'm all alone tonight with a fridge full of leftovers and I don't really want to cook from scratch.

I grab some leftover, over-salted, (I have no idea why anyone adds salt to plain salad),  mixed greens, rinse it off and throw in some diced fake ham and turkey and a little daiya cheddar, a little bit of Maple Grove Organic Balsamic Fat Free Vinaigrette, tossed it in the container and chowed down in about 90 seconds. 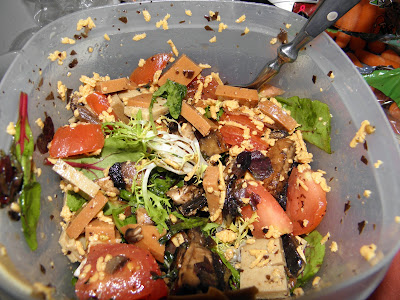 Now to raid the fridge where there is a bowl of leftover roasted veggies.  Parsnips, Carrots, Sweet Potatoes.

Sautee up some onions and garlic in olive oil, throw in some carrots and celery and now to toss in some spices.  What to use, what to use?  Salt and pepper, sure.  How about some cumin, caraway, coriander?  What else?  Ah, a bit of cinnamon, yes!  A shake or two of cayenne.  Now we're talking.

Let it go for a bit and chop up the veggies, toss them in and heat them up in the spices.  In goes about 6 quarts of stock, (well, water and some veggie base).  I bring to a boil and toss in oh, 2 cups of red lentils ... dal.  Let it come back up and simmer for about 30 minutes. 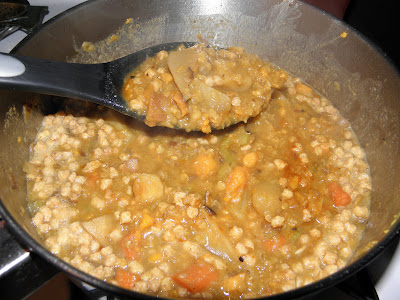 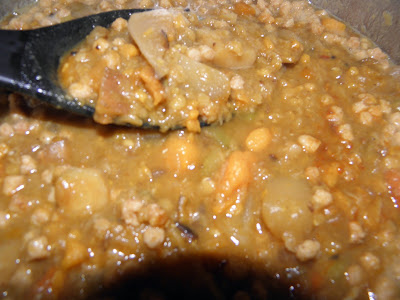 I toss in the TVP granules, buzz it with the immersion blender and then turn off the heat and stir them around and let it re-hydrate for 15 minutes. 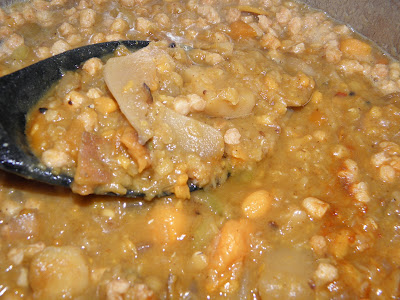 But you can't serve something so delicious out of a pot even if you are alone... 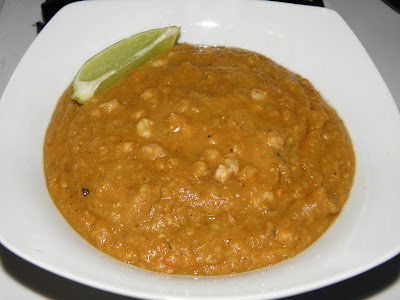 I wish I had some fresh cilantro but hey, lime is green.  Squeeze squeeze.  Eat eat.
Posted by Marty at 8:00 PM