Night one in Chicago and the big guy is happy to watch baseball and eat at TGIF so I have a car and a 100% vegan mindset.  I Happy Cow, (now a verb you see), and find 2 Karyn's places but one uses words like, "chic," and I'm not really chic.  I'm cool but not chic.  So I pick Cooked.

It takes me about 20 minutes to get there from the hotel near Midway and I find a parking space around the corner.  I spend another 15 minutes trying to figure out if I need to pay for parking and by then there are only 22 minutes left that I have to pay for parking FOR.  So I spend another 5 wondering if I could get away with it and being from NYC where the traffic NAZIS will ticket you while you are actually walking to the machine to pay for your parking receipt to put on your dashboard to prove you paid for parking, (right?!), I cave in and buy $1.40 worth of asphalt rental time.

Karyn's has several tables outside and a welcoming facade.  Inside it is warm and ... cool, woody and modern but not trying to prove anything, just a nice place.

My waitress was upbeat and more than willing to find out the answers to my questions about what was made inhouse, (the seitan/tofu protein mixture), and what was purchased outside, (the Match meat used in my Buffalo Wings), and willingly shared which were her favorites on the menu.

I started with a local organic beer, (well, Wisconsin is local to me anyway), Lakefront Organic ESB which stands for Extra Special Bitter.  It was milder than I was bracing for and quite enjoyable with my wings.
Buffalo Wings  $9.00
Chicken soy meat dusted in whole wheat flour. Seasoned with paprika, garlic and onion. Served with garlic and barbeque sauces

The Buffalo Wings were a hit with me.  Crispy on the outside and chewy on the inside.  I swear I could have put a straw in the Ranch dressing.  It had a creamy and slightly sweet taste to it.  Man that was good.  The Buffalo sauce had a nice hot sauce flavor but didn't scorch.  Did I say that Ranch should have been served with a spoon?  I didn't hit the BBQ sauce too much because I had ordered BBQ for a main. 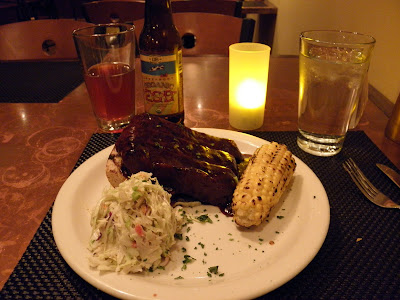 Slab of Ribs   $13.00
BBQ lovers- a grilled tofu/seitan meat substitution that will fool and delight you 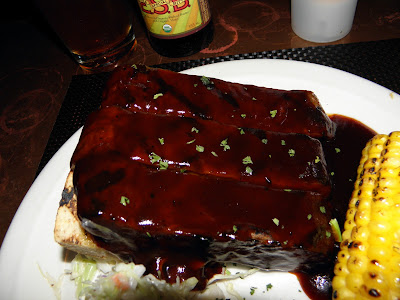 This is a pretty nice looking plate with the ribs being almost an inch thick.  It's certainly something to sink your teeth into.  The BBQ sauce is a KC sweet sauce.  I found it just up to the line, but not over, of being too sweet and it had a really nice smoky flavor.  The bread that the ribs are sitting on is a garlic bread made with a multi grain or wheat roll.  I don't know if it was on purpose but it almost had a pretzel type feel, moist but dense with a nice crust.  I wasn't bowled over by too much garlic, just enough. 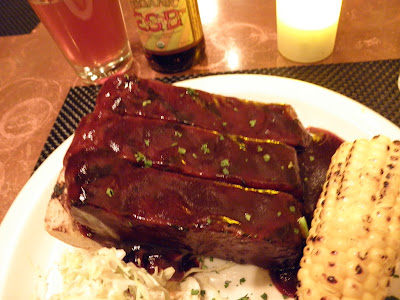 I did find the corn cold, at best it was room temperature and not all that sweet.

The cole slaw was a drier type, not all slathered with mayo, (veganaise), and was good but was a tad on the bland side.

And at this point the camera batteries died and we're back to iPhone pics.

When my waitress brought over the main plate she said my side of greens was on the way.  A few minutes later she still said it was on the way.  I had images of freshly prepped Collards being blanched, shock cooled and quick sauteed in garlic ... or some such delight.  I was really craving greens and looking forward to them.  So ... when they finally appeared I understood what a Yelp reviewer meant when they said about their meal that it was, to paraphrase, uninspired vegetables.  I couldn't understand what uninspired cooking was.  But this was it.  It seemed like the greens were boiled for hours, turned a brownish/greyish hue and had nothing but a bland bitter taste.  This was incredibly disappointing.  It looked like they were even thrown carelessly into the cup.

I figured since I'm a blogger now, well, for years, why not try a vegan dessert.  Well, I settled on the  German Double Carob Cake.  I probably should have wandered over to the display case since they all looked so enticing.  I must say that whether it's because I'm not such a dessert person or it was vegan or I was feeling pretty full that I'd say this cake was good, flavorful, needed a cup of coffee but just fell short of being a great dessert.
The service was adequate, sometimes I waited what I thought was a bit too long, especially since the place wasn't all that busy.  I thought the side, although panned, still should have been brought out with the entree.  My waitress was happy and smiled and I enjoyed being waited on by her my picking of nits aside.

And a strange thing though, at the conclusion of the meal I was presented with a postcard.  It had some pretty pictures of the other restaurant, Karyn's on Green, the chic one, (although they looked to be taken by a poor digital phone camera and then expanded), but the most prominent thing on it was a line drawn through the words, "10% OFF FOOD AND DRINK."  It was odd, making me feel like I missed the discount.  Now I wanted something I didn't even know others had had.  Wah wah.  Ditch the cards Karyn or print up new ones I think.

So Karyn's on the whole satisfied.  It was nice to just order and eat without the usual inquiries.  Being in a vegan place always does that.  There were some high notes but a few areas that I'd hope improve before my next visit and I will be back again.