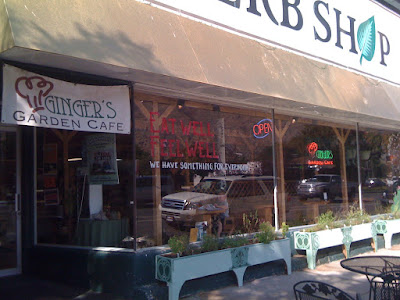 
I needed something for the trip home and wanted to get a third sampling of Provo’s vegan options so drove the 15 minutes from downtown Provo to Springville. The restaurant is located on the ground floor of a natural health school. If I had more time I’d take a graduate degree there.

The shop is airy and sports a full wall of nutrition/diet/cookbooks in addition to a few aisles of food. I could lose myself here for an entire afternoon.  What I really needed from the store was Silk Creamer for my coffee but they only had 2 kinds of soy milk.  Alas.

I figured a quick snack of nachos and half a Grilled Veggie Sandwichwith a BBQ burger would suffice for the next 7 - 8 hours and give me a sampling of their offerings.  This was our wrapped "to go" order, unwrapped for the picture taking, (on the iPhone because apparently when I go on a quest for food sometimes I can't remember to take both the car keys AND the camera).

At 2:30 our passengers, (who showed up a half hour early), discovered they left a bag in the hotel and we had at least another hour of sitting around. The nachos didn't have a chance.


The nachos were blue corn chips with fresh chopped veggies. For my money, the cheese sauce should really have been slathered over the top and maybe it is when you get it in the cafe but I wanted so much more than was in that little plastic container. Actually, you know the chips would be a soggy mess if they poured the stuff on but it’s sooo good. Nutritional yeast is most likely the key.

The half sandwich had delicious roast veggies and the bread was a hearty grain bread. What could be bad with vegenaise and balsamic? Sitting in the cockpit it was a bit unwieldy as the bread was thick and the veggies were squishing out so this sandwich was eaten with a knife and fork.


Grilled Veggie $7.99 Half $5.99
Lettuce, tomato, avocado, mustard and paprika with mushrooms, zucchini and onion on foccacia bread with vegenaise and balsamic

I had never had a Sunshine burger before and I’m going to have to pick up a package of them and try them out correctly. This was a great sandwich, (I’m not really sure those two words go together), but it was also a bit cumbersome. The whole grain bun was soft and chewy and there were a lot of toppings so I’m not even sure exactly what the burger tasted like. BBQ sauce is a fantastic masker of flavors and this did have a good BBQ taste, sweet though, no real kick at all. It was definitely a satisfying meal at 41,000 feet.  I noted the vegenaise and balsamic flavor so this might have been a mistake in toppings but there was no lack of flavor.

BBQ Burger $7.99
Sunshine patty topped with sauteed onions and green peppers
Here’s the bone to pick though. As nice as he was, the young man behind the register said everything was vegan except the meat. OK, I can buy that by definition. I asked what they made inhouse and it was really nothing. No seitan, or tempeh dishes. OK, it’s a little cafe. But ... when I asked about the spicy chicken patty sandwich he said it was Quorn. He sort of mispronounced it as corn but spelled it and the lightbulb seemed to go off in his head at the same time I said, “so it’s not really vegan, is it?”

If people who work in health food stores can’t nail something that isn’t vegan immediately, how can I ever expect my waitress in any ANY mainstream restaurant to know what I’m talking about and to recognize something cooked in butter or with chicken stock as being something that I don’t want???

As the statue in the store says in so many words, you can never be too old to learn:

The BBQ veggie burger is my absolute favorite thing to order at Ginger's! I love all the food there, and they sell delicious "Melissa's Raw" desserts. On their menu above the register it has a key telling which menu items are vegan, it has a symbol next to it, so I know as a vegan I can eat the BBQ veggie burger, but not the BBQ "chicken" sandwich which is marked as only vegetarian :)
I'm so glad you visited Ginger's Garden Cafe! It's my favorite place to eat in Utah :)

Hi Ashley,
Thanks for visiting the blog. I enjoyed Gingers but I think the place in Provo might have topped it by a little because they made more of their food than Gingers. I also feel that even though there might be a guide, if I ask an employee to be my safety net, either because I'm in too much of a hurry, (typical New Yorker?), or just miss the "V" by the item on a menu, by saying I'm a vegan, and they offer me Quorn, they're sort of not helping me much.

I have this issue when a place offers vegan and I'm lured in and then get "caught" and discover I've ordered something non vegan. It happens too often it seems.

I need to slow down.

I was actually thinking about Provo and hoping I get a trip out there soon.

Actually, we make everything from the soups to the sauces to the 'meats'. I don't know when you visited or who was working but as an employee for over four years I can guarantee everything is made from scratch by our own hands, always organic and always vegan.