Mellow Mushroom come out of the dark, Savannah GA.

Why have I never heard of Mellow Mushroom?  Perhaps because in NYC there are umpteen billion pizza places, (all Original and all owned by a guy named Ray), and if you live in NYC you rarely will go out of your neighborhood to get pizza from a newly opened parlor.  So probably with righteous management analysis they haven't opened in NYC.

On the road, I am shocked if I find a place that has vegan cheese so pizza isn't usually on my radar.  Savannah seems to be a vegan food desert and searching Google Maps for vegan brought up, among other non vegan places, Mellow Mushroom.  My copilot said she'd heard of them, being from Florida, so off we went.

The city of Savannah is rife with oldness, Civil War feel to this Yankee.  (Met fan yankee).  The tunnels of trees along the streets and old buildings steeped in history, well, you can just imagine what it might have been like 150 years ago during the civil war or 50 years ago during another kind of war.  Charm is a word which must be used to describe the city though. 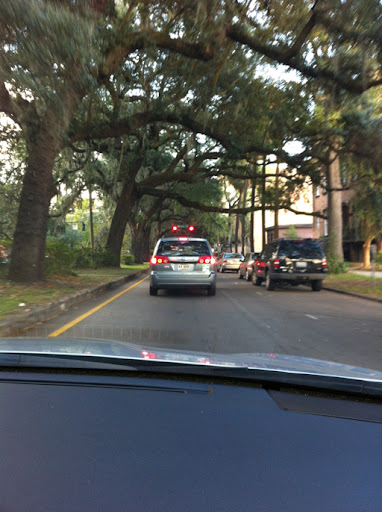 If I was back in college this is definitely the kind of place I'd hang out in.  It has that hippy/student-y kind of beer bar but with a bunch of flat screen TVs and some outdoor seating.  Some tables had been pushed together for families so it caters to exactly ... well, everyone.

The 5th star pat on the back high five goes to Mellow Mushroom for realizing that it's not a stone's throw away but merely a coin flip off the thumb away from being a mainstream pizza place and offering vegan options.  Make a vegan crust.  (I was at a place that used heavy cream in their dough so this first accomplishment isn't a given ... apparently.  I never would have thought but life is stranger than fiction.  Heavy cream?)

Next you have to NOT put cheese in your sauce.  I thought I read on the menu someplace that the red BASE (they call it a base), was a combination of red sauce and pesto.  I called today and spoke with Tracey who after speaking with 2 chefs there affirmed the sauce had no pesto in it and it was 100% vegan.  It didn't make sense that pesto would be in a red sauce but now if you see it on the menu or hallucinate it as I did apparently, you'll know it's vegan.

Next you have to have veggies.  This for a pizza place is truly a no brainer.  Mellow Mushroom goes one better, (two actually), and offers tempeh and tofu as protein options.  I didn't try the tempeh and how its cooked would be my first question if I go back and remember to ask it but I did have tofu included on my Mega-Veggie.  I wasn't expecting much and got a little more than that.  The tofu didn't have any specific taste that I could pick out but it was a perfect consistency.  Just enough chew to not be mushy and not too much to be rubbery.  So thanks for that but one of the problems with a pie that has 11 ingredients plus sauce and cheese is that no one ingredient would be missed too much if it was omitted.  I also happened to have brought my Tofurky Italian Sausages having just come from the (out of the way) Kroegers, where I stocked up for the next few days.

The last thing you have to have is a vegan cheese.  Since Daiya is available wholesale there is no longer any excuse not to carry it if you serve, well, anything at all.  Mellow Mushroom will always have my business if there's one in my overnight city.  They hit all of these bullet points.


The pie was good.  It was flavorful, loaded with veggies and Daiya.  The sun dried tomatoes were a burst of flavor but I did load it up with garlic powder and red pepper flakes.  The other veggies were just members of the orchestra but no particular solos stood out except for those previously mentioned tomatoes.  The crust, although not crispy at all, had a wonderful yeasty fresh baked aroma that is addicting after the first bite and still satisfied my jonsing the next day in the hotel room after a minute in the microwave.

Not the best pizza in the world but clearly way past merely acceptable I will seek out Mellow Mushroom in any city I find they've opened up shop in.