What a great little find in Bay Shore, while on an overnight in Islip, (ISP).  Although not a 100% vegan restaurant Tula Kitchen offers more than a gratuitous one or two vegan options.  I felt welcome.  The waiter knew what vegan was.  The kitchen apparently knew what vegan was.  Even though I have recurring nightmares about eating in mixed food establishments, (yes, Dr. Freud), I felt at ease here due to the relative abundance of vegan options on the menu.  It was not an appeasement one or two items but a rather noticeable chunk of the menu.

The decor is warm and welcoming, with a wooden banquette along one wall covered with pillows, and an almost hookah lounge feel to it.  Not that I've ever been to a hookah lounge, nor is it a smoke filled environment.

The meal starts out with a complimentary vegan dish of seasoned toasted pita with a small dish comprised mostly of chickpeas, garlic, and onions.  Although tasty and a nice way to start the meal, the pita wasn't exactly the right instrument for scooping up the contents. No worries, place settings are available at each seat. 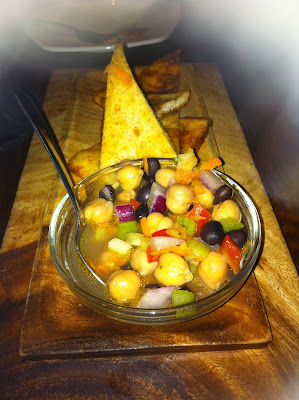 6 vegan options made my choice rather difficult.  Tofu veggie crab cakes?  Oh, I'm coming back for this one!  But for my main dish I went with the Tempeh Reuben.  Sometimes you just have a hankerin', know what I mean?

The dish was served with an Asian slaw.  Crisp and fresh beyond a doubt, it had the perfect blend of acid and sweet.  And crunch.  It tasted like it was tossed and put on the plate as it was headed through the pass, not tonged out of a vat of pre made slaw sitting for hours.

The Reuben comes with cheddar or vegan cheese so make sure you specify.

This was one of the most perfect sandwiches I've ever had.  And it surprised me because I was expecting, well, you know, a sammich, not a dining experience.  The bread had the perfect toasted crunch, the cheese was gooey, the kraut was not overpowering but balanced the creamy house made, (with Veganaise), vegan Russian dressing and the whole thing just came together.  Although it was made from Tempeh it didn't have any trace of a "tempeh-ish" flavor.  The quantity of ingredients was also balanced with no search party needed to find any one thing and no culinary riot police needed to hold back any one flavor.  As perfect as a sandwich can be, this was. 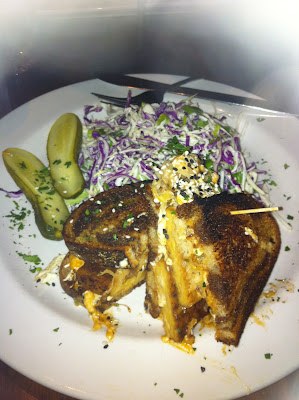 Vegan dessert was of course the chocolate cake.  The consistency was almost like a mousse.   It was gone in no time.  My flying compatriot, (who didn't order a vegan entree, btw, and thoroughly enjoyed his food, in case you're thinking of coming here with a carnivore), thought it tasted a bit "healthy."  I know what he meant but since I haven't had a "regular" piece of dessert in so long I only noticed it after he pointed it out, being too busy smooshing the cake/pie around my mouth in near ecstatic savoring-ness.  He did finish his half though. 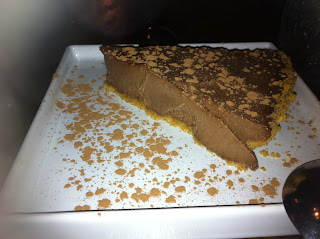 Tula is not a person, it's not "Tula's" Kitchen.  As explained on the website, Tula is a sanskrit word for "balance." They certainly have found it here.

Hello, I am a vegan and would love to learn more about going vegan for a trip. Most cruises are about eating sea food. There are also sea weed salads we can indulge on.