Kansas City, the words are almost synonymous with meat.  Beef.  Stockyards.  Amazing that there are 3 vegan establishments here.  Fud is not open for dinner during the week and Mud Pie Vegan Bakery wasn't what I had in mind for a dinner, so what turned out to be a good choice was made by default.

But first, KC you do have your progressive shite together.  Rentable bikes that you can return to different locations  than where you rented them from.  These automated kiosks caught my attention in a double take and I pulled over to take a few pics.  The only question I have is what if you're taking a bike to a place that is full.  Then what, since you're charged by the hour while you have the bike.  The clock apparently stops when you bring it back and you can take the bike as many times as you want during the period you paid for.  Interesting concept. 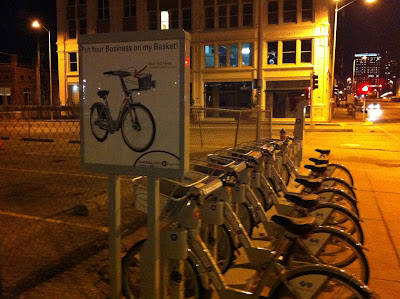 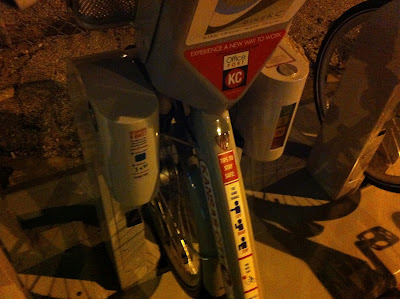 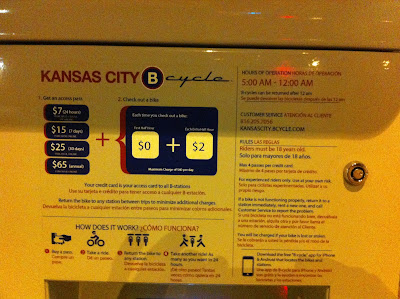 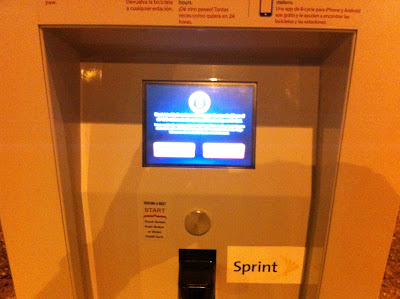 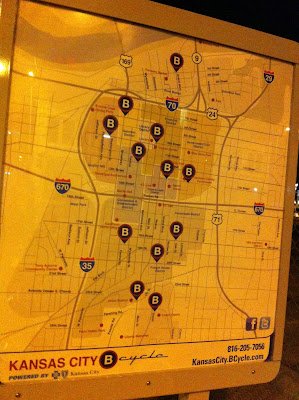 Now just to give you a feel for the place, here's something you don't see in my neck of the woods everyday ... but it's one of the first things I noticed at MCI, the big airport: 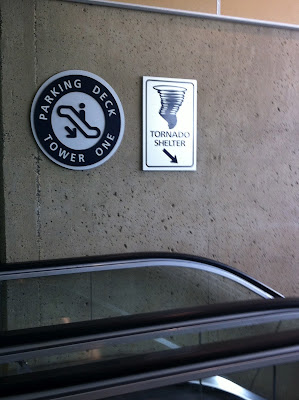 And one last thing.  Here's the view from my hotel.  Actually not a bad looking city: 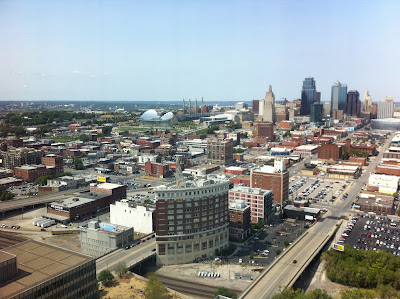 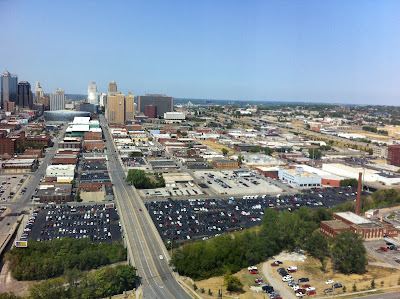 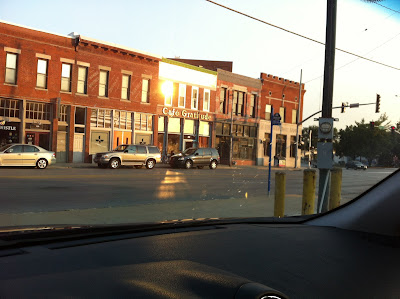 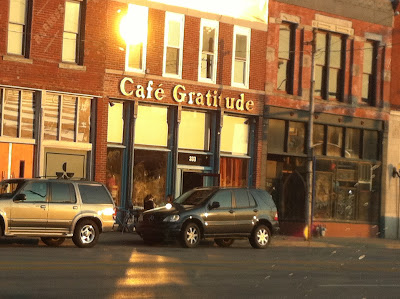 The interior is a warm brick and wood interior with a bar running about half way down the dining room.  I found the environment very relaxing. 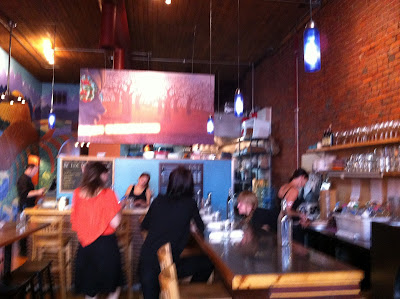 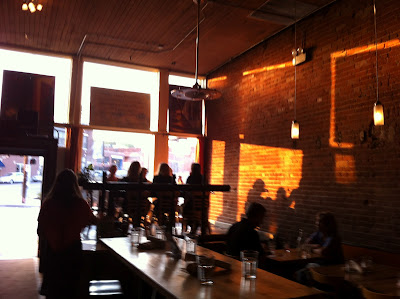 I don't really like when dishes have cute names and every dish here does.  As a newcomer to a menu I just find it just a bit harder to decipher.  Here are a few shots of the menu.  That being said it is a pretty extensive menu and you do have lots of options and cuisines to choose from. The conversation sounds like this, "Did you want to be comforted or are you connected?"
"I don't know, I just want the potatoes." 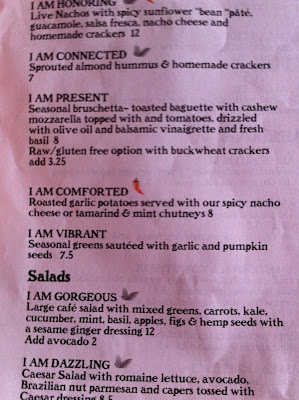 I got the I Am Comforted as an appetizer. 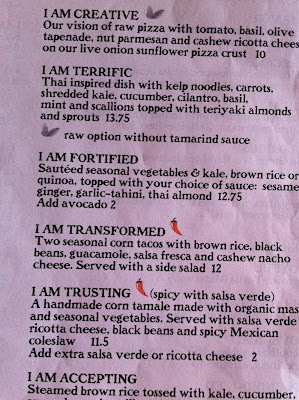 I Am Transformed is their best seller and since I'm still on a quest for the world's best veggie burger I tried that too.  I Am Magical.  "poof." 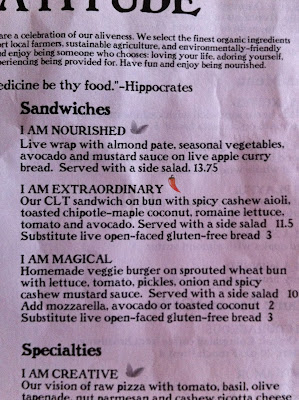 Just so you know, I put gluttony aside and took home half of everything I ordered.  Except dessert.  That didn't make it back to the hotel room. 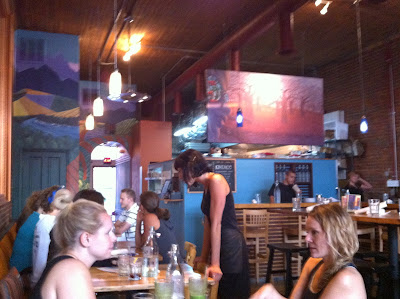 Natalie the owner asked me if I liked chocolate and mint as she put this in front of me.  I LOVE chocolate and mint.  This was a shake and although I thought it was cool and refreshing and enjoyed the crunch of the nibs I think the mint, from fresh mint leaves, was a bit too "green" if that makes any sense.  It had a great taste but had a "leafy" quality. 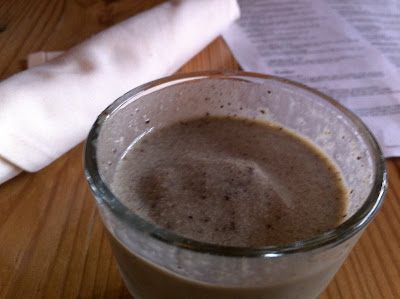 I love the mission statement although it didn't want to cooperate with the setting sun for a good picture. 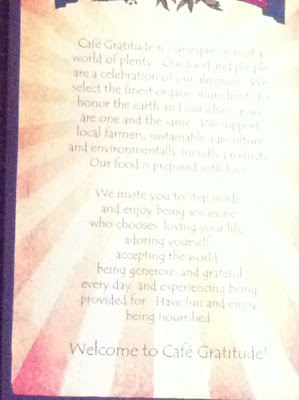 My potatoes were delicious but I was expecting, for some reason, more like a potato skin appetizer.  This would have been great as a side.  The cashew cream is just that, creamy and cheesy and has a great kick (as in heat).  The Mama Tutu's sauce was unnecessary. 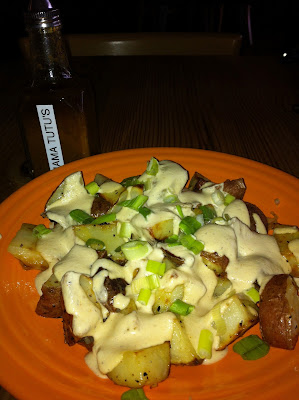 I can see why the tacos are their best seller.  They were fantastic and had a combination of almost every Mexican flavor and ingredient.  Beans, rice, guac, cashew cheese, corn, yada yada, all on a soft corn tortilla. 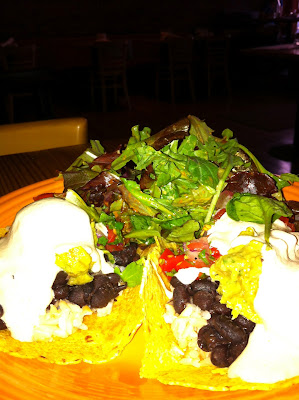 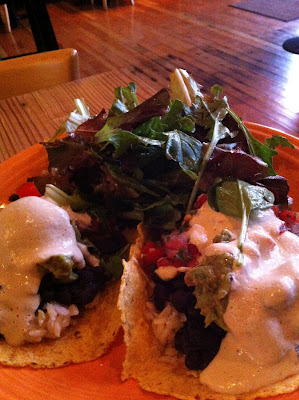 The burger was ok.  It wasn't the burger of my youth that I was looking for from a consistency stand point.  The waiter did warm me about the in-house mustard.  It did have an over powering flavor and I'd definitely recommend getting it on the side. 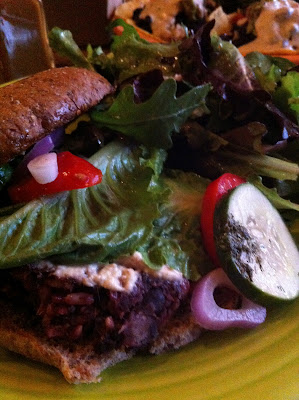 The mixed greens served with both entrees were fresh and the vinaigrette was crisp and bright. 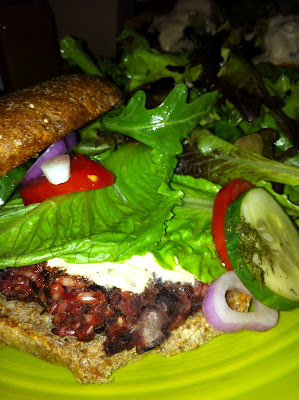 OK, now the dessert.  Called a mocha cheesecake.  Misnomer.  It bears little resemblance to the ricotta curdy-ness texture of a true cheesecake but more like a thick chocolate mousse.  The flavor was outstanding and the meld of chocolate and coffee and nuts was over the top.  I broke my vow to take half of my food home with this last plate of food.  You won't be able to help yourself either. 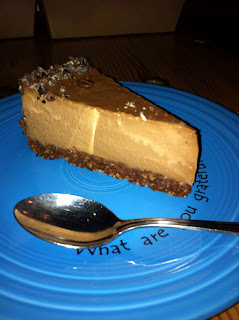 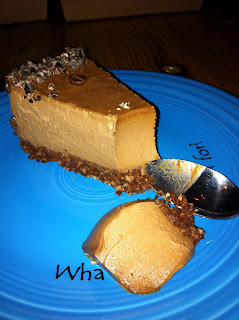 I'd go back to Cafe Gratitude in a heartbeat.  I found the environment warm and relaxing and the success with the tacos and dessert well worth another trip to sample other offerings.  One note though, there are a few items that have honey from the bar.  I think 1%?  So why?

The next morning before flying out I stopped called ahead for a Vegan Kitchen Sink at Succotash, an omni place that offers a few vegan options.