The Stand in Fairfield worth a quick stop

I had the pleasure of sitting down with the world famous baker, Hannah Kaminsky, author of 3, (shh, working on a 4th), vegan baking and dessert books.  (I got an advance copy of her latest ice cream book.  Now I have to save up for an ice cream maker although there are some alternative ways to make your frozen desserts).

We met at The Stand in Fairfield, Connecticut.  It's on Mill Plain Road, south of exit 21.  You can literally hit it with a rock from the highway so the good news is that if you're driving and want a healthier faster foodal choice, this is it.

It's in a shopping area, not what I'd call a shopping center or strip mall but a bunch of commercial spaces.  You take a leap of faith and follow a driveway with speed bumps, (lest you're really hungry), to this building. 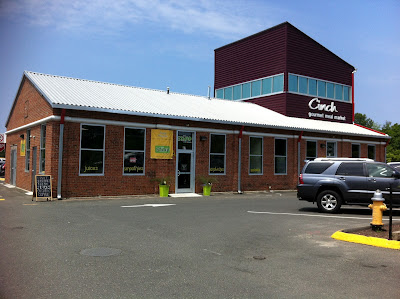 There is a mix of raw foods and salads, juices and smoothies, sandwiches and a few hot options. 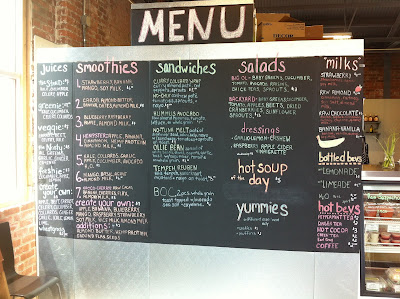 In all fairness I didn't like everything we bought but we did change a few things around so I do want to say I'd give this another shot, (well, I'd come back anyway if I was passing by and hungry), eating their foods as intended, not as we changed them. 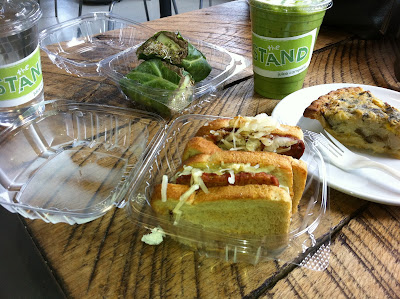 Lets get the first two things I didn't like out of the way first.  My smoothie was ugh at best.  Now I did substitute almond milk for water and removed the garlic but it was mostly a non-descript flavor, (if you could taste a color), with an undertone of cucumber.  There are many other combinations available that I'd try over this next time.  I don't think I'd order it even with no changes.  It's originally listed as Kale, Collards, cucumber, apple, garlic avocado and water.  I put greens in all of my daily smoothies at home so am pretty used to drinking my greens but I just don't see this working. 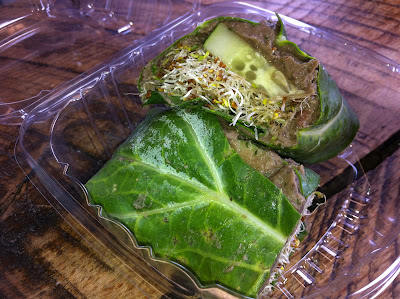 The Ollie Bean wasn't very flavorful although did look sort of nice.  The spread consisting of white beans was rather neutral and topped with sprouts just made it healthy and grassy tasting.  I didn't' really get the salty briny-ness of the olives or capers or much of the garlic or basil.  I would have much preferred eating this on the whole grain bread.  I'm not a really big fan of collard wraps, don't hate them but I can't compare them to the lusciousness of eating fresh bread and to eat like this I have to put the thought, "Eat a healthy meal," in my mind.  This is an eat to live dish and I was much more in the mood for a live to eat sampling.  Just to be clear, it's served on bread but we changed it to a collard wrap. 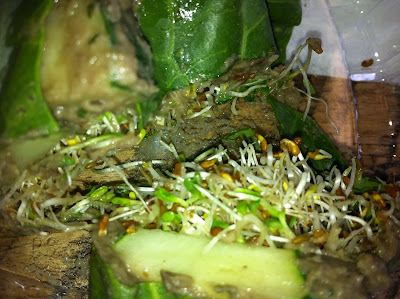 I enjoyed the quiche.  I thought it had a buttery flavor and did a nice job of putting some sort of custardy egginess into the vegan dish.  It had a very nice pronounced sweetness from the onions and we thought there was cauliflower in there as well.  I saw some stringy-like ingredient which I would have guessed as spaghetti squash.  For me this was an "order again" dish. 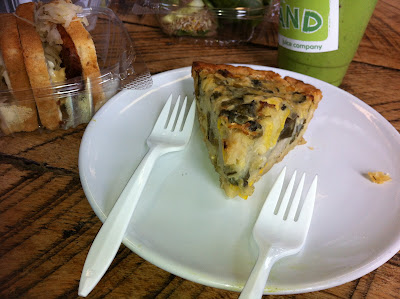 My favorite, also an "order again" was the Tempeh Ruben.  BBQ tempeh, sauerkraut, mustard and mayonnaise on toasted bread.  I wouldn't have thought the combination of BBQ and sauerkraut would work but it did.  The kraut wasn't overpowering and the sweetness of the BBQ cut through as the primary flavor. 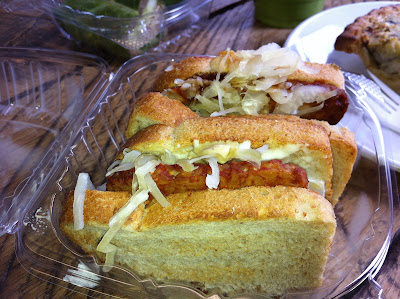 You can really see how this is much more my cup of tea.  It's comfort on a sandwich and you know you're going to wear the condiments all over your face after the first bite.  I enjoyed the flavor combinations and the textural contrasts of the soft bread and nutty tempeh with the gentle crunch of the kraut and fatty mouthfeel of the mayo.  I thought this was very well done. 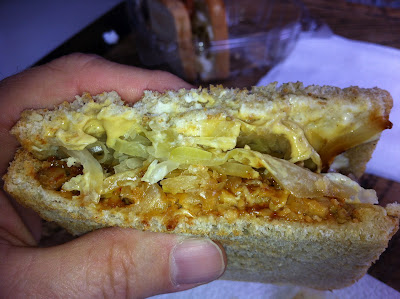 I would definitely count this as a place to stop off for a quick bite.  There are some good options no matter which way your foodal inclinations lean at a particular time, whether health conscious or taste driven, (not that they have to be mutually exclusive), but more raw driven perhaps.  It does get a big point for having such easy on/easy off.  They've been open 10 months and I'm looking forward to sampling their wares again.