We find ourselves on the Eastern end of Long Island, not quite as far as the forks or Riverhead but far enough out there to wonder about the availability of vegan fare. Fortunately Medford has a Chinese restaurant called the Golden Star with a vegetarian/vegan menu.  It's always nice to stumble on something like this in such an unlikely place.  Boy is that neighborhoodism for you.  Just because a place isn't cosmopolitan doesn't mean there might not be an enclave of folks craving mock meats.  Unlikely but still ... 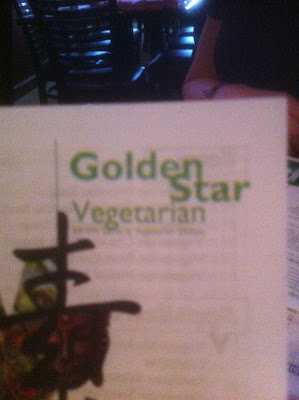 Our fried calamari was very true texture wise and had a delicious taste of the sea. Salty and crispy with a light soy ginger vinaigrette.

The fried oysters were less close and had more of a minimeatball texture. The fried veggies had a thick tempura batter, so I guess that wouldn't be tempura but just a thick rice batter.

Wonton soup was delicious but wonton were undercooked. They also had 6 layers of dough so perhaps the wrap and re-wrap of the wonton was a bit overzealous. 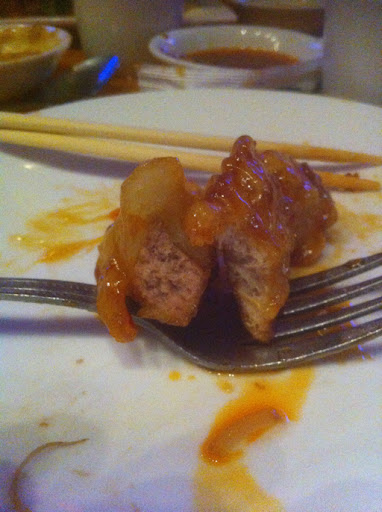 Orange flavored chicken seemed to be a different type of mock meat than the Sesame chicken. Very very sweet. Sesame sauce less so. Not much heat.

Good old fashioned Chinese food.  Nothing fancy, elegant or exotic coming out of the kitchen.  Hearty protein in thick sauces.  I like this kind of food every now and then and this is on target.

I am trying to catch up on a few posts and am limited to some notes I took during the meal and not recent memory of the dishes.  Sorry for the abbreviated descriptions.
Posted by Marty at 8:30 PM