Blown away in Indiana ... not by a twister, but by vegan in Italy

Quite the whiner I can become sometimes but I was just blown away in a good way, and in Elkhart, Indiana, no less.

The other pilot was going to find an Italian restaurant that catered to my vegan foodal needs and first did a search for Italian restaurants.  Then he searched for whole wheat surmising those who had whole wheat pasta would be a notch above the rest in terms of health and differing dietary needs.  He called one and said his friend was vegan and was greeted with, get this ... "Oh we have some vegan customers, no problem."  Huh?  What?  Are you kidding?  I mean, just when you think it's not safe to go in the water anymore this pops up.  What an excellent job he did finding the place.  I was psyched.  I had no idea how psyched I should have been.

But, all my positive energy and good thoughts of sugar plum fairies dancing, uh, wait, different dream ... well, lets just put it this way.  In aviation we have a saying, "Trust ... but verify."  So I packed a few things in my cooler bag, having earlier resigned myself to finding a place to eat offering only white pasta and tomato sauce.  I took my vegan salad dressing, my Yves meatless crumbles, and my mozzarella Daiya cheese.  I also took my soy creamer should a nice cup of decaf have my name on it.

Now Per Bacco will come up on Google maps as Bruno's Pizza and there is just no explanation until you get there and find out the building is owned but the same people.  So here's a picture just to help you find the place. 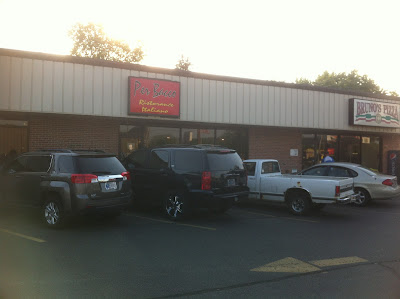 "Is one of you the vegan?" when we walked into the place.  No, I mean uber cheerfully, like Hey, you're finally home buddy, welcome.  We were expecting you and we know how to take care of you.  Candy the waitress was just so full of energy and pre-empted so many of my usual questions by saying things like, "Well, our bread is delivered so I can't vouch for it but our Ciabbata is house made so here's some garlic and oil to get you started."  I'm quietly shocked and awed.  Folks, there is nothing to indicate the presence of vegan knowledge here, unless you see the Butternut Squash ravioli on the specials menu. (It wasn't vegan as that particular dough had egg in it.)

Oh, and a salad with mixed greens, carrots, beets, tomatoes and dried cranberries.  Dressing you ask?  You didn't have to because Candy already said it's a house made balsamic with no honey or cheese.  (OK, I did ask to make sure and you know old habits die hard but she did reassure me.)  It was such a nice Balsamic.  None of this $4 supermarket junk here.  What a great combination of the fruit, veggies and sharp sweetness of the dressing. 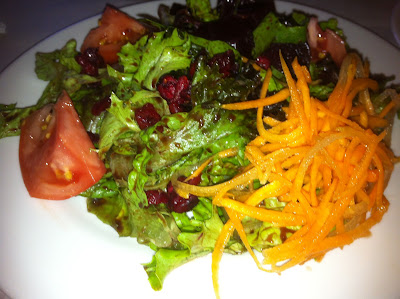 I went and talked to Marisa the chef/owner at Candy's invitation and laid my Daiya and Yves on the counters.  "There's a Whole Foods coming in Mishawaka," I told her.  "If you like this stuff you can probably get it there."

I also told her to not taste the Daiya out of the bag but to melt it on something and try it.  Candy told me they had a few vegan customers and I thought if I could sell them on these processed imitation foods they could incorporate them into the offerings and become a major, (the first Elkhart restaurant offering vegan labeled options will be Major of course), well, force in change.

I told Marisa to make anything she wanted with the ingredients, a little arrabiata, to make it like a bolognese sauce using the vegan whole wheat pasta.

So like 2 minutes later this shows up.  Ohhhhhhh, cheese bread.  My heart missed you.  Thank you Daiya! 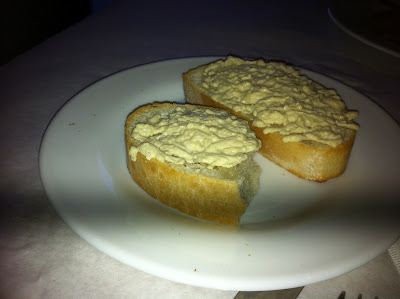 It turns out Marisa loved it and told me, when we said good bye, that she was definitely going to buy the product and put it on her menu.  (Score one for the animals).  Turns out she was chomping on the Daiya Cheese Bread in the back as well.

Now Candy apparently lived with the hippy population of Elkhart and had experience with vegan food and made her own vegan cheesecake to feed her former roommates vegan friends.  When I asked her to take a taste she said, "Not a big fan."  Later she came back after tasting and said, "I am amazed."  I actually don't remember exactly what her words were but that's what she said.  One eighty, as we call it in aviation.  (180 degree turn is a course reversal.)

Now for the entree.  This is what Marisa put before me.  A delicious thick tomato sauce with hot peppers mixed in, the Yves mixed in and the Daiya on top.  I mixed the Daiya into the hot pasta and it turned into a creamy rich delicious amazing dish.  Let me go so far as to throw the word awesome out there.  Candy said that Marisa had made a bunch more and was chowing down on vegan fare in the kitchen.  She loved the stuff and was quite possibly going out after dinner service to be first on line at Whole Foods. 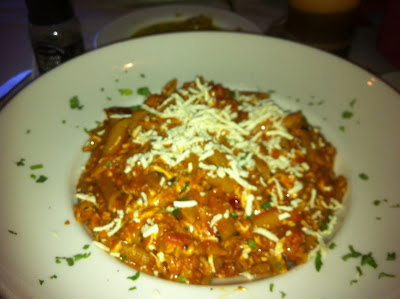 So you might ask what kind of meal I'd have had if I hadn't brought my own ingredients.  I'm guessing a veg centered meal, possibly a putanesca or primavera.  Where's the vegan?  Well the staff knows about cheese and butter an chicken stock and will make sure your meal is prepared vegan.  You don't have to teach them what it means.  I wanted a more hearty old style Italian meal and this was it.  The flavor of the sauce was so rich I ate half of that entree.

I hope you get to Elkhart and I hope you find a vegan bolognese on the menu when you get there.  To me this was more of an opportunity to show a chef who was already half way to where I think all chefs should be a few more options to encourage the consumption of more vegan meals.  To push them, to list them, to put a vegan special on the menu every night, to have a vegan section permanently on the menu, to open up the floodgates of curiosity about what is out there in the vegan world to restauranteurs.  It was a night of educating and from what I was told, it seemed I had excellent students.

I also ended up speaking to the front desk clerk at the hotel here.  His wife is expecting.  Now it turns out she had so much milk in her life she is now lactose intolerant and somehow the topic of vegan cheese came up and I poured some of my Daiya into a cup for him.  Then the hotel chef comes by.  Guess what we're talking about.  I left a sample of Daiya for him too.  (Daiya, how about a little comish if you find yourself shipping massive quantities of your product to Elkhart, Indiana??  Huh?  Huh?)

Vegan, make more vegans is all I have to say.
Posted by Marty at 8:54 PM