I and 2 other pilots schlepped out to Rutherford for dinner, my mouth watering at the prospect of a seitan parmigiana hero/sub/grinder.  It was not to be as Rutherford Pancake House is only open for dinner Thursday, Friday, and Saturday night.

The people do protest your withholding of vegan food 4 nights a week dear Sirs.

Across the street is a very nice looking Greek restaurant.  I have to admit we were like Roadrunner, beeping with our heads furtively darting from side to side, since the only other suggestion was the Subway at the corner.  This being said my camera instincts were a bit off.  I have no pics of the outside or the inside.

Eros Cafe and After Athens seems to be split into 2 venus although I couldn't tell where, (or if), they actually are divided.  The website shows a full service dining room which I guess is After Athens but we sat in the more casual coffee shop area.  There are low tables with comfortable looking couches in the rear of a table lined restaurant and outside is a smoking section and parking lot.  By the back of another building is another outside dining area.  We wanted to sit outside but that is where the smoking section is located, (they also have hookahs available and something else I had never seen but I'll post it when I remember what it was and can find a link.  Some other smoking device apparently), and the cigarette smoke wasn't exactly inviting to us.  I also smelled a faint whiff from the dumpster.  I guess if you smoke you don't smell things as well.  Well, you don't.  I also wasn't thrilled about eating overlooking a parking lot and we ended up sitting back inside.

It's not a very vegan friendly place, (there is no SOY milk available at the coffee bar, hello 2012!), but there were a few things I saw on the menu that I thought might work.  All would be a "hold the cheese" order and all would have to be further examined for egg in the pasta, cheese in the marinara, (there isn't any), and other such qualifiers. 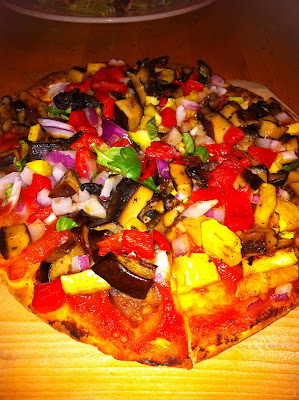 I opted for the personal margarita pizza, add onions, roasted peppers, mushrooms and every vegetable they had.  I have to tell you that eating a cheese-less pizza held little anticipation for me.  Why?  Can't everyone get Daiya?  The bottom line was that this was much better than I thought!  The mushrooms were marinated in a balsamic and the flavor of the roasted veggies rocked!  I wasn't at all disappointed in this dish.  I wouldn't seek it out again but it wasn't nearly as boring as I had imagined.  Actually the opposite.  Still, if I'm going to eat pizza ... Whole Foods in Maywood, New Jersey has pizza made with Daiya.  On another day at Whole Foods they had a Daiya and sautéed spinach pie.  So there are options creeping into the world every day.  They're not blasting this stuff from the rooftops but they are discoverable by us vegans. 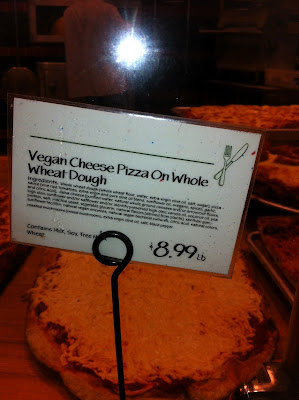 So my meal in Rutherford wasn't my Seitan Parmigiana but it certainly did an admirable job as an understudy.