I like this place even before I walk in.  There's an outdoor seating area, warm brown woods and soft tan colors, and I can see paintings on the wall.  It's welcoming.  I like the word "vegan" in the sign out front.  I like no apologies.
It just gets better as you walk in.  There's a counter for ordering, you get your number on a stick and pick a table and your food is brought to you when it's ready.

Some of the food is made with Gardein and some is made from commercially made seitan.  I wasnted something inhouse so I ordered the Black Bean Burger with a side of mashed potatoes and gravy. I find it interesting that at some point I started to look at a menu and realized I craved greens.  I ordered the small Spinach Salad also.

And perhaps the most important part of the meal, (just kidding.  No I'm not), beer.  How nice to just look at the beers and get whichever one I wanted knowing they were vegan.  I could choose any one I wanted.  And there were 2 to choose from!  Didn't even have to break out my iPhone to look at barnivore.com.

The Spinach Salad had an orange ginger dressing.  I tasted a soft heat from the ginger but didn't taste orange.  It was more like a ginger soy vinaigrette. The salad itself was made up of fresh spinach with red onions, nuts and raisins.  It was fresh and bright and as much as I can say about a salad, it was a good one and I actually enjoyed eating it because I liked it, not because I hear a voice in my head saying, "Eat your spinach!"

I wasn't a big fan of the mashed mashed and gravy. It wasn't bad or off but I'd say it tasted "vegan."  Perhaps I was looking for a darker mushroomy gravy or a more chickeny one.  I liked the rustic chunk with skins of the potatoes . Ah, what the heck, I finished them too.

The burger was an in house made black bean burger with carrots and what seemed like a bean puree holding it together, (although I was told there was flour used as a binder also), served on a ciabatta and was very good.

The beans combined with the other ingredients gave the sandwich a nice flavor and bite.  The ciabatta might, just might, have been too much crust for the burger but if you held on with both hands and made a commitment to go for it, open wide and attack with gusto, (and not worry about getting sandwich smoosh all over your face), it all stayed under control. Lettuce, tomato, fine thin sprouts, veganaise and ketchup cradled the burger.  The menu said mustard too but I didn't taste it.

I loved the flavor of the burger.  I got some nice bites of seared crust on the burger but much of that, like any soft veggie burger, got a little lost in the bread crust. 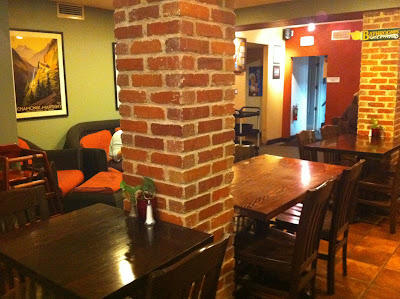 I just enjoyed being in this place and I will definitely go back if I have another trip to Orlando that doesn't involve a kid and a big mouse!

I love that we two New Yorkers were eating at Ethos in FL this weekend! Too bad we couldn't have met up! My aunt had that burger, on a wrap, and she loved it. I went with seitan and cheese and had the What's the Dilly, Philly. YUM (and vegan cole slaw...score!)

I'm a sucker for Philly Cheese Steaks and was torn between that and something made in house.

I also don't mean to say that the cole slaw was the best thing but it was soooooo good after sooo long.