I just needed to get back in the groove of blogging.  So easy to fall by the wayside ... like exercise.  Miss one day and the next is easier.

So here's a dinner I veganized from Bal Arneson, The Cooking Channel's "The Spice Goddess."  I had put this up about 7 weeks ago and really liked it.  Plus I enjoy her show and "Indian Cooking," on the Cooking Channel and have been just starting a ton of dishes by heating up some oil and tossing in a variety of spices.  Cardamom, fennel, cumin, fenugreek, coriander seeds.  I think it's a great way to learn to use various flavors.  I still haven't figured out when to use the seed and when to use the powder.  I have had a few dishes with the seeds still a bit ... crunchy ... and of course been on my hands and knees looking for popped seeds on the floor but I've been having a ton of fun making the apartment smell like an Indian restaurant.   I can't seem to get the fenugreek to soften up.  Ferris?

I've been going on a Soy Curls binge and this chicken dish definitely looked like my next victim.  The dish, not the chicken!  Last time I used up some seitan and this time I wanted to see if the convenience of the soy curls would work in this dish too.

Starting with another of Bal's recipes:

I followed the recipe with the exception of instead of using brown lentils I had red lentils and used a cup of canned diced organic tomatoes instead of fresh.  When the soup was simmering down I thought the flavor was a bit shallow so I added a few teaspoons of No Chicken Base, (probably about 2-3), and the whole thing came together deliciously.  Not really much to do here because this is basically a vegan recipe to start with. 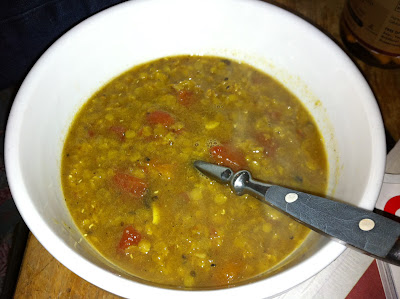 This was a bit more challenging and the end results, while delicious, didn't come out exactly as I had imagined.  I wanted to put a crisp on the curls and come to think of it, haven't been able to really do that with Soy Curls in any dish yet.  I think what happens is the curls, even after I strain them and squeeze them, are still very wet and they tend to steam instead of caramelize.  Perhaps there's no sugar in them to crisp up.  Maybe I need a coating and to precook them.  Any ideas?  Anyone?  Ferris?


I didn't have curry leaves, used yellow instead of brown mustard seeds and didn't have red chilie powder that I thought matched well with this dish.  I didn't want to over heat the dish as my daughter is just beginning to enjoy a bit of heat but not a searing hot dish.

The dish was also missing something so I grabbed the Butler (same people who make Soy Curls) Chik-Style seasoning and gave it a couple of shakes.  That was all the salt I needed.  Also, I remembered the Sambar powder had a bit of heat and after all was said and done gave it a few shakes of cayenne powder.  The heat was perfect.  The soy curls were meaty and soft.  They held the sauce very well.  I think I want to really get the curls to crip for a better texture contrast but there was no sending this finished dish back.

The carnivore, the vegetarian, and I cleaned our plates.  Thanks Bal, for this quick and easy weeknight dinner.
Posted by Marty at 9:11 PM

Have you tried molasses or adding just a bit of soya sauce to get the pieces crisp? I find that usually works. Also, lower heat and leaving the pan alone usually helps. I usually lack the patience... But if the soy curls are all protein, it might take a good bit of work to crisp them up. Perhaps drain them after cooking, then put them in a clean frying pan? Either way, they look good!

Hi TR,
sorry it took so long to answer. I'm going to give that a try next time. You know, one of the problems is I'm a typical type A New Yorker and hate waiting for anything, including soy curls to crisp up!

I'm also going to use my Tofu Press to squeeze some more water out and see how that works.