One of the reviews I read mentioned that this restaurant had a Vegan section of the menu.  In my wanderings through the Natural's market, Natural's Market (see review here) one of the young ladies told me I just had to have the mushroom dish.  With those two pieces of info, how could I not want to give Monsoon a visit.
Monsoon is located, like most of Palm Springs, in a strip mall.  Not that most of Palm Springs is in *that* strip mall but everything in Palm Springs seems to exist in a strip mall.  I love the area, the weather, (well, for a visit anyhow), but it is the most artificial, pre-fab, built up place I've been to.  I didn't see, (perhaps I didn't know where to look), any kind of "South Beach" or "Santa Fe" old town, old culture, or history unless you count Frank Sinatra, Dinah Shore street names or Bing Crosby restaurant.  There are chain restaurants galore so if you're looking for Applebee's or Chili's you'll have no trouble.  I like to think a place is where the locals eat, not where tourists go.  Monsoon had that kind of feel.
Inside is nothing fancy, (thank goodness), but it had a warm feeling to it.  The buffet was empty which I expected but somehow I love a buffet.  It's like an appetizer for my eyes even if I'm not going to eat anything from it and it's just sad to see an empty one. 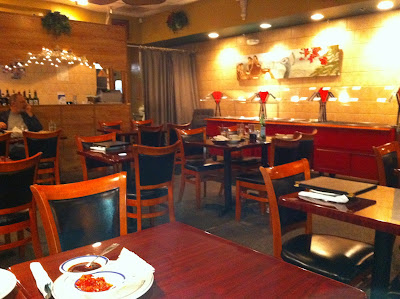 I never had a Gateway to India beer before and liked it.  I'm not a beer connoisseur and beer to me is either good and refreshing or flat and sucky ... or free in which case it's always outstanding.  This was good.  Beer for me also means I'm off.  I'm done. Can't call me to go to work.  It's almost a statement of implied relaxation.  So sometimes even bad beer is good.

Our papadam was pretty standard and served with a Tamarind dipping sauce along with a chopped onion relish.  The onion had a nice bite to it and the Tamarind had the standard sweet, astringent, tang.


There was a vegetarian section of the menu titled Organic Foods Entrees- Vegetarian.  This was right over the "Cornish Hen Specialty" section.  Oh well, we vegans do have a long way to go before the killing stops and we're reminded of it every day at every meal.
But I digress, again.  As I mentioned, one of the women in the health food market said I simply had to get the best vegan things which was a mushroom somethingorother.  There is a Mushroom Masala, Fresh button mushroom cooked with onion, tomato sauce and fresh spices for $18.99.  (Just as an aside, to pick one dish at random, the Chicken Tikka Masala is $13.99 and there are a whole slew of entrees labeled just Vegetarian and these are $10.99 to $11.99.  Guess there's a very hefty premium for organic.  I probably would have ordered this dish non organic had I actually taken the time and read the whole menu, but of course it wasn't listed there).
There is a section on the menu titled "Appetizers," and another below it titled, "Non-Veg Appetizers."  I didn't get any but this sort of made me think, "Nice when the veg options are the norm and the non veg options need to be labeled."  I didn't order an appetizer but am a starch junkie and did get the Aloo Parantha which is a stuffed whole wheat bread with mashed potatos and peas for 3 bucks.  Unfortunately the first one came with a shiny glaze on it and when I asked what that was the waitress just said, "Butter."  You know the dialogue from here.  Needless to say another was brought out.  The naan, interestingly enough, wasn't vegan.  The two of us talked about this before I ordered so I don't know where the disconnect happened but once again, life in a non vegan restaurant is always fraught with perils, Pauline.
The waitress and I talked about the heat level when ordering and I basically said I love spicy but didn't want to die in the restaurant that particular night.  I said, 6 or 7, with that caveat about death.

This dish was excellent.  The heat was part of the dish, not the main attraction.  It was a delicious earthy  mix of mushrooms, I think there were Shitake as well, and peas in a nice rich mushroom sauce.  My buddy's chicken, he said, was noteworthy as well so returning to this place was definitely discussed and if you're so inclined to bring a carnivore they won't be disappointed either.  I just wish the vegan items were marked a bit better and my foodal requests were taken a bit more seriously.  Actually, I wish the world was vegan but that's another story. 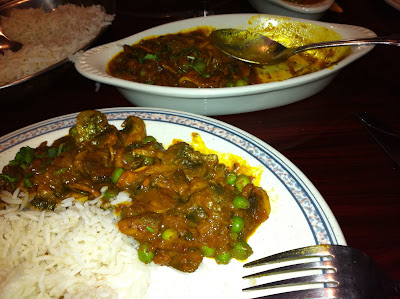