Meal planning isn’t always as cut and dried as you might think.  A simple ASAP trip to Pittsburgh started out as a drop off but became a wait and return.  Then the weather decided to have some fun and one airport after another opened and closed as the snow storm pummeled the East Coast.  Each time we went out to the plane and got ready to start we were told our airport of choice was closing for snow removal or the weather had gone below the minimum landing visibility but relentlessly the clock kept ticking and eventually we ran out of legal duty time and had to spend the night in a hotel in Pittsburgh, getting into the room about 1:30 in the morning.  Merely another 13 1/2 hour day.
The next day we dropped our passengers off at one NJ airport.  What should have been a quick hop back to Teterboro and the end of that rare occurrence ... an easy day, was within arms reach.  Call the company and get our release.  What?  Wait?  Huh?  [sigh]


No such luck.  We were told to sit tight and wait, something was brewing.  This is bad.  So we grab a crew car to run out for some food and luckily there was a Trader Joe’s nearby. 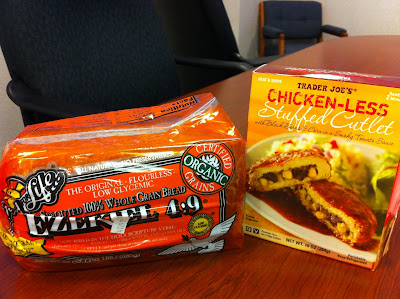 I grabbed a few veggies, some Ezekiel bread, (there was no, and I mean none at all, vegan cheese in Trader Joe’s), some microwaveable things I’d never seen before, some raw veggies, and back to the airport I went. Sometimes I get confused when I shop for a quick, on the road, meal.  I usually have a few false starts, the gun goes off twice and I have to put back all the stuff I WANT to buy but can't because I'm not cooking at home in a real kitchen!
What I really wanted was a ciabatta or Portuguese roll but time was of the essence and I didn't want to read the ingredient lists of 15 packages to find one without milk.
I do know, however, that I'm never far from a microwave as a heat source, (and really, one day I hope to save on my electric bill by glowing in the dark).  I opened one package of Chicken-less Stuffed Cutlet, nuked it, sliced it in half and sandwichized it.
It was a nice quick meal.  The chicken reminded me of Gardein, not withstanding the “Made in Canada” on the box.  It was chewy and had a very nice hearty texture.  The beans and corn added a contrast in texture and although was supposed to be a Mexican bent I got more like Italian with a little heat.
The best thing I ever ate?  No, but an improvised, tasty, "on the road" sandwich and thank you Trader Joe’s for putting “Vegan” right there on the front of the package so I didn’t have to search yet another ingredient list!!!!
There used to be a series of detective novels by Lawrence Sanders and the character used to make dry sandwiches and wet sandwiches.  His wet sandwiches had ingredients like cole slaw on them but what I remember is a wet sandwich had to be eaten over a sink.  This definitely was a wet sandwich.  It took as long to clean up the sauce from the conference room table as it did to make the sandwich.  All in all, well worth the effort.


Just as an aside, I tried to look up the ingredient list online but the Trader Joe's website doesn't seem to have a search function.  If I missed it let me know but they do have a multi-page list of vegan options where I did find the cutlets listed.


In the interest of full disclosure and supreme cub reporting efforts, I also got a hummus wrap.  It was edible.  It was appreciated.  It was very alfalfa-y.  It wasn't really wondrously tasty and I'd probably skip that the next time I loaded up on food for a 10 hour extension of my day.
Posted by Marty at 11:08 AM

The TJ's stuffed "chicken" is actually a Gardein product, along with the TJ's "Chicken-Less" and "Beef-Less" strips. They were some of the first Gardein products available in the US!

I grabbed another product also ... chicken-less pulled chicken. I'm hoping that will make a decent sandwich but I guarantee that's going to be a drippy wet one. I'm sure I'll be wearing a white shirt when that goes down.

I don't mind Gardein products. I think as a rule they're pretty good. I'd just like them to say so.