Anguilla dinner and home made pancakes

We're staying at the Paradise Cove which is not quite on the water.  The hotel only shuttles you to the beach and a place called Smokeys and my buddy had a good experience here so I said ok.  (You gotta give to get, right?)

I called the place earlier in the day and asked about what they had for a "strict vegetarian, no animals, fish, eggs or cheese..."

I was told about pasta and vegetables, (OK), salad with grilled vegetables, (ok, hot and cold ... interesting combo but still ok), french fries and onion rings, (to get my minimum daily requirement of fried food), and then I was told, and I do quote here, "we sometimes have vegetarians come in here and they eat side dishes and whatnot."  Mmmm, a big bowl of whatnot.  Making my mouth water just thinking about it.  Of course the batter for the onion rings was not vegan I later found out.

I went with the garlic pasta with mushrooms and a tomato coulis and the grilled vegetable salad over mixed greens.


So sadly to report, the Paradise Cove is not where I'd return if I were to return to Anguilla.  I like having a studio with microwave and cooking, (it also had a 2 burner stove but I wan't about to stock up on ingredients), but my room and balcony overlooked sort of a "backyard" junk pile beyond the broken cyclone fence.  The pools were very nice but just about any place has pools.  The restaurant served me steamed vegetables and rice and fruit for breakfast, no hot cereal available.  The checkout took me 25 minutes and then it still wasn't right.  The place was ok if you're a pilot on an overnight and either shop or bring food with you, (make sure it complies with the local Customs requirements),  but for a vacation I think there would be better places to go.  It also was after the season and there were only a few people staying there.

As far as Smokey's goes, take a cab somewhere else where they care.

Now for the pancakes.  I used the recipe from Colleen Patrick-Goudreau's "The Joy of Vegan Baking."  It was easy, quick and made pretty good pancakes.  The second batch I used half whole wheat flour and they were just as good but with a heartier wheatier taste.  I used maple syrup the first batch and agave the second.  They were sweet enough not to need syrup.  I caved in and put that big nob of Earth Balance on top. 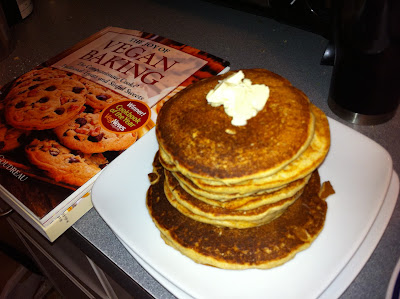 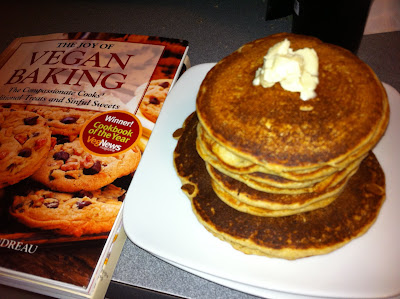