We were looking for this place ... 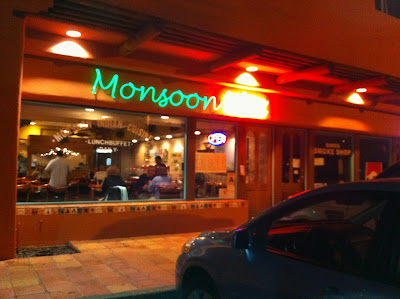 but instead found this place.

And the first thing I think is, "Ah, just another health food store," but then I see this counter with this huge sign and immediately notice the word: 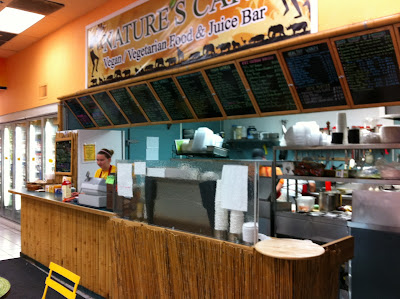 So I look on the menu board.  Now bear in mind we're both headed off to Monsoon to get an Indian dinner.  But I can't resist reading these:
I am overwhelmed and my mind is reeling, trying to figure out a way, a food plan, a scheme to get something from this bit of vegan heaven and eat next door at Monsoon and still be able to take something with me for lunch tomorrow.  I don't care, my mind isn't functioning clearly.  I just see "Philly Un Steak Sandwich" and can't even finish reading down the list.  I order it.  Funny how I say "vegan" this and "vegan" that and the counter girl still says, "It has regular cheese on it, do you want vegan cheese?"  But she was sweet so I say, "vegan" a few more times in conversation and leave her so I can browse around the store. I find some over sized primal pepperoni and jerky sticks and a container of hemp seeds.  (I had no idea what they were but just happened to have listened to "Ask a Vegan" podcast this very day and learned all about them).

My sandwich came and I opened up the container to take a look and I swear I almost ate it right there and then.  It smelled so delicious.  Now I did ask the chef what brand of unsteak he used and he said he didn't know.  Hmmm.  I'll give them a call tomorrow and add the brand if I find out but here I am, 24 hours later sitting in New Orleans and every place I want to try seems to have closed at 10PM.  This is one of the best sandwiches.  It's loaded with steak and cheese, which I'm thinking is Treese because it just doesn't look like Daiya.  It's packed with onions and green and red peppers and is just amazing.  It is flavorful and peppery and the sweetness from the onions and peppers and bread all mix together.

The chips were so "corny" unlike most anything I've had out of a bag.  I do have to get the brand of these too.


I did find myself here a few days later, which for me is like lightening striking twice in the same place.  I ran into Bill, one of the owners who answered a few questions.   The "meat" in the sandwich is their own veggie protein steak, marinated and then diced and sauteed up with some onions, peppers, and all the other good stuff I mentioned.  The cheese turned out to be a Follow Your Heart mozz.  It was good but I did also mention to Bill that there was also Treese and Daiya to look into as he mentioned they don't like to use it on the melts because it stays sort of chunky.  As an aside, Bill mentioned to me that there were 103 items on the menu board.

I really didn't want to spend $42 on the 2 pound block of faux meats, fist since Bill described it as about the size of a shoebox and second I didn't want to think about keeping it frozen for 2 more days but it's on my bucket list of things to order.

I hope this first attempt at putting up a video comes out but in any case, this is a great find in PSP for breakfast, (they open at 7), lunch or dinner.

But how was Monsoon?

Monsoon had it's vegan challenges but was actually excellent. Review is on the list of things I need to get to!