It's hard to write an obituary, especially when the patient is healthy and vibrant but plans on ending it's life. Such is the sad future of Counter, for 8 years providing mostly, (there's some cheese on the menu), vegan cuisine in the East Village.  Last week, or so, I got an email saying the restaurant is closing.  So there won't be many more reviews from Counter.

I always feel bad when a restaurant closes that I like.  I feel even worse when I haven't gone there in 4 years.  My last meal here was for my 50th birthday when my family took me there back in my vegetarian days.  I loved the meal although can't remember  exactly what I had possibly because I really wasn't a blogger back then.  So, for this New Years Eve, we as a family did some things we haven't done in a long while.  Things have been tight for the last couple of years but this year after resurrecting a family tradition of seeing the Nutcracker at Lincoln Center,  (it was an amazing performance), we decided on a meal at Counter.  And here it is:


It's hard when you view a menu and want to just order everything.  Everything you do order is settling because there's something else you didn't order but lets focus on the incredible spread that was put before us.

A combination of apps and side dishes.  Olives in a citrus herb oil.  Grilled tofu.  Portobello sliders.

I never had an olive I didn't like.  Well, since I was a kid and hated green olives anyway, but now I love all olives.  I got a hint of citrus and parsley but not other herbs.  Didn't matter, there were only pits left and if we had bread, there wouldn't have been any oil left either. 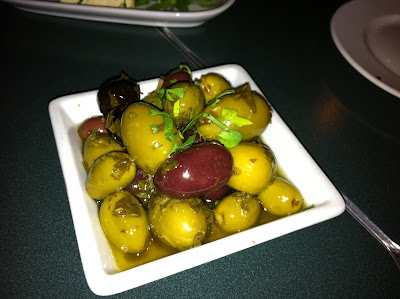 I'm not sure why we ordered the grilled tofu actually.  It didn't seem to be a fascinating dish.  I mean, it's tofu and it's grilled.  And that was it.  Although I got an incredible sense of egginess.  I actually couldn't believe how much this should have been in a scramble.  It had a little bit of char and grill flavor which was very nice.  Also, it was cut to the perfect size.  Sometimes you get a huge piece of tofu and it just becomes a chew fest but this was a perfect mouth size. 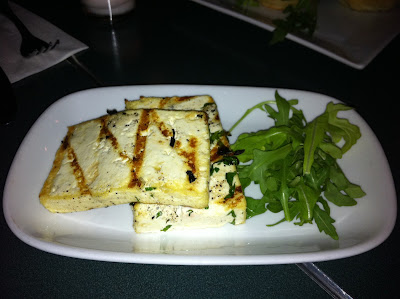 The third appetizer blew us out of the water.  It should have been a plate of 3.  Actually it should have been 6.  The portobello was sliced thinly and put on a perfect bun with a light balsamic.  It was what sliders were meant to be.

And just because I had to, we ordered a soup.  It was a butternut squash with miso.  What a creamy combination.  My daughter isn't a big fan of butternut but as you can see in the second picture there was another unequal distribution of vittles. 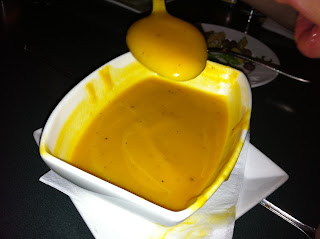 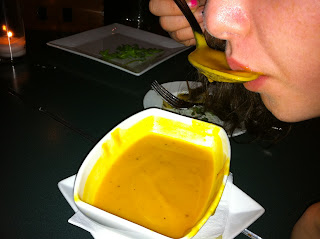 The entrees were equally as amazing.  The 2 burgers were ordered with cheddar cheese so I only had a small piece I chiseled off the bottom but the mushroom-seitan burgers were intense.  A meaty flavor like I can't remember.  I asked for the recipe actually.  The only detractor would be that it was a tad crumbly. And that's not a terrible thing, just needs a smidge of binder. 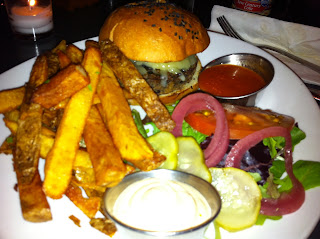 The fries were hearty and the thick steak fries were mixed with my favorite crispy crunchy skinny ones.
The two dipping sauces are a Harissa vegan mayo aioli and a ketchup.  The ketchup was a little watery and more like a tomato sauce than I preferred but there was enough flavor from the burger to not even need ketchup.  I got a hint of heat and spice from the Harissa but as you know I'm a hot sauce junkie and could have used a few more teaspoons of the hot pepper sauce. 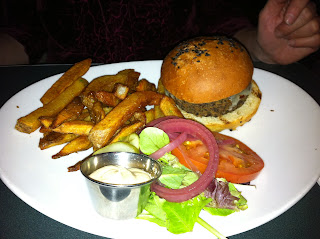 My entree was the glazed seitan with a mess o greens and fingerling potatoes.  This seitan was excellent. It was not as fluffy as the seitan from 3 Brothers but more hearty and "meaty," less fluffy.  It had a crust on it that left a wonderful mouthfeel.  The greens were fresh and delicious and the potatoes were cooked just perfectly. 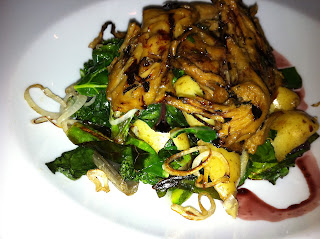 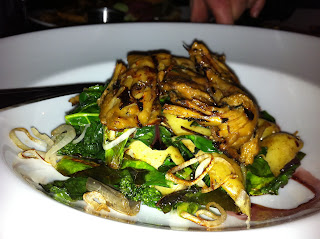 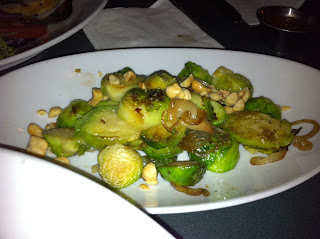 For some reason we didn't think we'd have enough food and my daughter ordered a side of Brussel Sprouts.  It's her favorite so we let her get a plate.  I prefer my Brussel Sprouts a bit more done and soft but I guess that's a personal preference.  The roasted flavor with onions was outstanding.  There were peanuts sprinkled on top and I wasn't exactly sure where they fit into the dish but hey, I like peanuts.

Two desserts were the sundae and the Carrot Oat cake.  The ice creams were cool and refreshing on a nice chocolate cake bed. 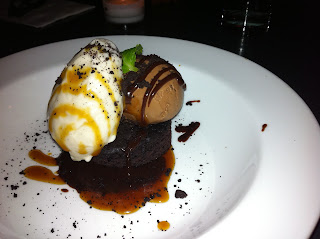 The cake was served with a maple ice cream and butterscotch glaze.  It had a marmalade aspect and as marmalade isn't my favorite I could have done without it, especially since the dessert itself was bursting with flavors. 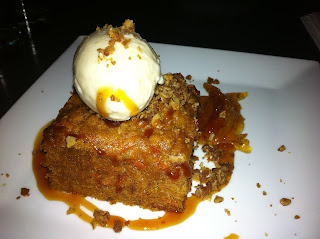 There are two final statements I want to say about this amazing place.  I hope to be able to eat here again before it closes and the culinary scene in NY will definitely take a loss when Counter is gone.