How do you act in a restaurant? + 3 Brothers meatballs

I went again with my wife, daughter and 2 carnivore friends.  I always have this little hope in the back of my mind that because a vegan menu is available I'll be surprised and one of them will take the leap just because, well, because, and order a vegan dish ... but I was the only one who had vegan.

I also tend to feel a lot of pressure.  I want every chef in a mainstream restaurant who holds out a vegan menu to understand this.  A dinner isn't just a time for conversation with friends.  It's a battleground.  It ALWAYS becomes a food centered test of veganism and vegan food.

Tell me if you've heard these statements when dining with carni/omnivores.

Why am I always defending vegan food?  OK, not always, sometimes someone will evaluate the food on it's own merits and not on a comparison with animal protein but I feel compelled to say, "Here, try this, what do you think of this?" where the answer is invariably, "They don't taste like REAL chicken wings."  At some point I have to question whether I eat food because it's good or because it's vegan.  You can put Louisiana Hot Sauce and Earth Balance on white bread and it doesn't become "Buffalo White Bread," so does putting that same sauce on seitan just interest me or will it ever interest the other 97% of the population who would just as easily pour it on chicken wings?

I was listening to some old podcasts from NZ Vegan podcast (Thank you Elizabeth), and had 2 epiphanies.  1) I realized that talking to people about veganism is sales, pure and simple and I have a sales background.  It's being asked a question, "I can understand being a vegetarian but a VEGAN??!!  That's fanatical!  What if you were out with 50 people, you'd make a big issue of your veganism and inconvenience 50 other people if you couldn't find anything to eat?"

If you think about it, this is an objection.  The first thing a good salesperson does is ask probing questions to make sure they understand the objection.  Also, it can make you realize how stupid some of the points being made are.  (I know you've ALL, (YES, EACH AND EVERY ONE OF YOU), been asked about you and the chicken on the desert island.  You can either answer the question or ask a probing question like, "Do you often find yourself with that dilemma, being stranded on a desert island, or do we live in a society where we do have food choices?"

So I asked my smartest best friend of 45 years, "What scenario would you imagine I'd be eating with 50 people and couldn't find a salad with oil and vinegar?  How would you see that as inconvenient?  Was I just beamed down to this wedding or are all 50 of us having a town hall meeting about where to go to dinner?  What kind of issue are you asking me if I'm going to make a big deal about?  Did someone make a mistake about my meal or intentionally give me something I asked not to be served?"  There was really no answer to my questions because he realized that the questions were really stupid.  Better questions would be why he thinks it's safe to allow GM alfalfa to be grown and why don't you question if there will be any mutants among your grand or great grandchildren.  For a better discussion about this, (I'm only half way through the podcast), see Ask a Vegan with Caryn Hartglass.

2)  The second realization is that the statement, "All vegans are advocates for abolition," is true for all of us on some level.  Regardless of the reason why you eat vegan, regardless of whether you eat vegan on Meatless Mondays, or only Before 6, you are causing a shift.  That shift is occurring whether or not you really care what happens in the world, the health of it's populace, or have deep feelings for animals and their slaughter.  Every day there are more and more people making a conscious decision to omit an animal protein from their plate.  I think this is a laudable occurrence.  I don't fault people for not immediately jumping into the deep end of the pool.  I am happy to see them start to make small changes. Whether my friends ever go vegan isn't the issue today.  Today I just want them to think about, to be conscious of more than the, "What do feel like tasting?" question regarding what they ingest.

So I said the sentence, "I am an abolitionist advocate.  I don't believe any animals should be used for any reason."  And now it's out on the table.

The meal.
Oh yes, I do blog about meals and just don't rant and rave.

Now I do want to apologize but the
Oyster Mushroom “Calamari”
fried oyster mushrooms, served with tomato sauce and tartar sauce 10
and the

looked so good they were just plowed into.  I also couldn't wait to give out samples.  So I forgot the picture.

Someone commented that the "bleu cheese dressing" just "didn't do it," for them.  I always start defending when I hear that kind of comment.  "Well, it's not EXACTLY Blue Cheese but it's a dressing made with tofu to go on a dish as a compliment to the heat."  Sometimes I add, "... and no animals were killed to make it and we can feed the world with it."

Why do I feel like if someone else doesn't like the food I order I have to defend it for the mere fact that it's vegan?  Would I have done this before I became a vegan?  Do I ever say to a carnivore, "Yeah, it's not like Blue Cheese," and leave it at that?  Must I add a caveat?  Do you?  Is it ever ok to say you don't like some vegan dish when you were the one who dragged everyone into the restaurant in the first place?

I also really didn't know what I wanted.  Something different but familiar.  Our waitress, (yes a vegan), suggested the spaghetti and meatballs.  I realized I hadn't had a meatball in like 15 years so was sold.

The plate was huge.  I thought the meatballs were a bit on the soft side and suppose I was looking for more of a toothy bite.  I liked the flavor of the meatball and the sauce, (nice pieces of basil), and the whole wheat pasta nuttiness.  I think the pasta was broken in half because I couldn't really get a good fork twirl going as the strands were too short.  Silly point, but still. 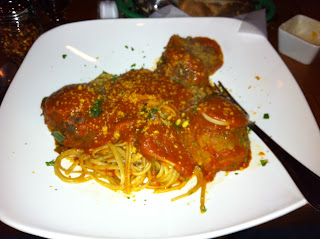 The other diners all enjoyed their dishes although the comment about the puttanesca was that it was a bit on the salty side.  I don't know what you expect when you order olives and capers and anchovies but so be it.  The point is that if you're vegan and want to not worry about what's in your food and play 20 questions with your wait person, take them to 3 Brothers in Rockville Center.  And order the desserts.

The desserts should get their own chapter.  They're not made on site and all the desserts are vegan.  There was also an invitation into the gluttony chamber with a 3 for 2 special.  Well, there's always the rational that there are 5 of us so we wouldn't each even be eating a whole dessert.  [HA!]  The cakes come from Vegan Treats in Bethlehem, PA.  I read one review on Yelp that panned the desserts but we all thought they were fantastic.  My staunch carnivore friend called them "100%" which shocked me but at last, there was something he didn't call, "fake."

Marty, I wish your family was vegan too...for obvious reasons & because then you'd be able to try so many more things at once at a restaurant!
P.S. Vegan Treats gets the omnis every time; they rule. Oh, and the "chocolate layer cake" is their incomparable Death By Chocolate; yum!

I have enjoyed reading your articles. It is well written. It looks like you spend a large amount of time and effort in writing the blog. I am appreciating your effort. .Restaurant Equipment