Guru, Provo, UT
Here it is again.  Low expectations get blown out of the water.  I mean Provo, Utah?  Vegan.  Just another 2 words that don’t seem to go together until I sat down and ate at Guru’s Cafe.  It was a short walk from the hotel and there seem to be a plethora of restaurants on this street.  I had actually seen it driving in and remembered it from my Happy Cow search.
As we passed the one or two tables in each of the restaurants on Center St. I was getting depressed at how dead this city was.  Even the tables and umbrellas outside Guru’s were pretty much empty but then the light shone in:
Guru’s had live music and maybe that was the draw.  Well, the place had more filled tables than empty and that was a good sign, no 2 drink minimum, (no alcohol at all ... 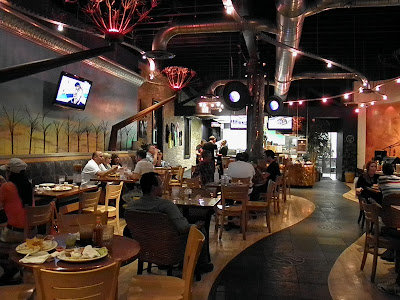 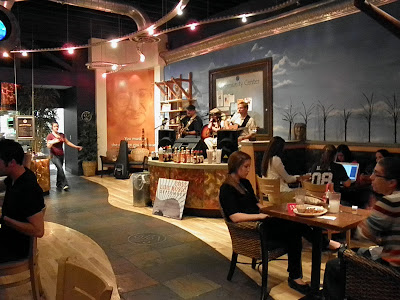 The live music was 3 folk singers and acoustic guitars.  I was digging that as anyone who knows me knows.  This place has like a hippy/bohemian/folksy/upscale modern kind of college-y/working class/professional kind of vibe.  Hard to pinpoint but very likable.  It is not a strictly veg place as there are animals on the menu.
I saw vegan, I saw vegetarian.  I didn’t put the two together and ordered a half bowl of the Curry and a Veggie Burrito.  They had little “v”s next to them.  Yup, you know it, I did the ASSUME thing again.  Only read half the description.  I ordered on the line, took my plastic number for the table so the server could find me and sat down.  For some reason  this feeling of dread came over me, I grabbed my buddies menu, saw Monterey Jack and bolted back to the register.
I apologized and said I didn’t see that the burrito wasn’t vegan and could we make it without the cheese and veganize it.  Some minutes had passed since my order went in and I saw food coming out of the kitchen pretty quickly so was resigning myself to paying for another one.  The guy behind the register asked if the cheese and ranch dressing were an issue, in a nice way though, a way that didn’t put the thought, “duh” in my head.  He asked the chef who was working in the open kitchen right behind the register.  The chef pointed to the salamander, (broiler), and there was a burrito.  I sort of deflated.  But ... but ... and this is a big but ... the chef and the guy, (again I am bad at asking for names sometimes), just said no problem, they’d make me another.
I apologized again, said it was my fault for not reading the fine print, and once again, they said, “NO PROBLEM.”
Attitudes like that should be bottled and sold.
Spicy Curry Bowl
The food was tasty and fresh.  The edamame had a cooked just right crunch/mush.  The corn kernels popped, the peppers, green beans, snow peas and veggies had the right cooked/crunch to them and the tofu squares were a good size to, well, not really taste like tofu having been coated with cornstarch and a seasoning mix before being deep fried.  The sauce had a nice spice, more of a subtle background heat than hot and a really nice coconutty and nutty flavor.
SPICY CURRY BOWL
Zucchini, yellow squash, carrots, green beans, snow peas, edamame, bean sprouts, cashews, and tofu in a spicy coconut curry sauce over rice. Vegan item.
half 5.99 full 8.99
Veggie Burrito
GURU'S VEGGIE BURRITO
Zucchini, yellow squash, carrots, green beans, edamame, mushrooms, corn, peanuts, tofu, brown rice, Ched. & Mont. Jack cheeses, and cilantro-lime ranch rolled in a spinach tortilla topped with Pico De Gallo and guacamole. Served with chips and salsa fresca.
7.99
You can see why I ran to omit the cheese and ranch dressing.  It’s interesting that the veggies in both dishes are so similar and yet so different tasting when the spices change.  This was a great burrito and aside from the lettuce on the place which I wasn’t sure what to do with, (yes, eat it thank you), the burrito was tops.  The veggies had a bit more steamed to them being all bundled up in the burrito but still retained their snap.  The guac was garlicy without being overpowering and the hot sauce on the salsa fresco added another dimension of flavor.
I could only eat half of each and with two bucks thrown in the tip jar at the register the whole meal was $17.06.
I can see why this place had the clientele it did.  The food was inexpensive, fresh, and way better than good.