Sometimes it's just serendipitous to end up in a place that omnivore and vegan can both find something to write home about especially when both are acting like an old married couple and looping the conversation with, "I don't care, as long as I can find something I want to eat, where do you want to eat?"

We finally find The Dream Cafe.  I like it.  Plenty of tables, (although only 2 brave souls are enjoying the evening's 95 degrees), and a bare wall, non slick interior.

I ask the waiter for vegan options and he points out the veggie burger with soy cheese and another item on the menu.  I point out the goat cheese in the ingredient list and he says, "well, the chef will make it without goat cheese."  Oy.  Here we go again.  I guess, if I'm going to be vegan, to start toughening up my skin and honing up my teaching skills.  I ask about the soy cheese and the veggie burger.  He'll be right back.  He says the chef isn't sure about 100% vegan.  I decide on one of those life long deep decisions.  I can't order anything on an, "I'm not sure," or "we're not 100% sure."  It's either yes, and I'll go with it, or it's "other," and I won't.

I ask about the squash and it's a go!  I order a hummus with pita because I'm starved.  So starved I forget the picture but it was a lot of hummus, a down to earth chickpea dish with no fancy added ingredients and toasted chickpeas.  Yes, I was told it was olive oil and not butter.

The entree came and I made a good choice. 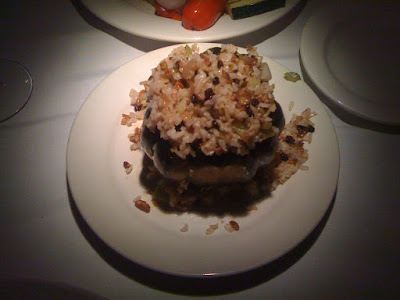 The acorn squash was hugh and the pilaf was overflowing.  It was delicious with shallots and currants and nuts.  The squash was roasted perfectly, with a bit of resistance to the fork and a smooth toothiness. 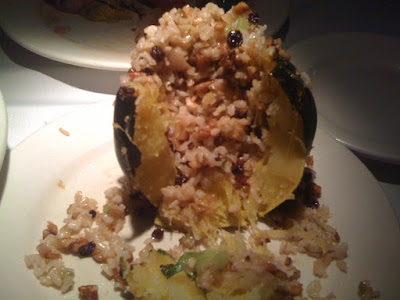 An excellent dish that would be worth returning for.

The waiter returned a bit later with a reminder that a salad was included and the salad.  I was assured the balsamic vinaigrette was vegan with only oil, vinegar, salt and pepper.  The greens were crisp and the dressing was a perfect compliment.  Not that I go gaga over salads but it was a nicely laid out dish and crunch of the croutons were just what was needed to go with the texture of the squash. 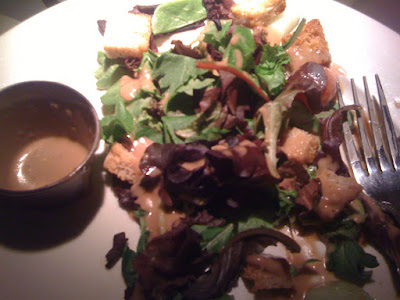 There were no vegan desserts so we called it a successful night of happenstance dining.

Email ThisBlogThis!Share to TwitterShare to FacebookShare to Pinterest
Labels: The Dream Cafe