You get to the hotel and want to take a quick drive away for some reason ... well, you have the rental car for 3 days so why just go where you might have to go if you DIDN'T have a car? I can't answer that but sometimes we have to pick our battles and this one wasn't even worth fighting. Mexican? I mean, onions and peppers and badabing, we have fajitas, right?

I lucked out with Rocco's and our waitress Sarah. 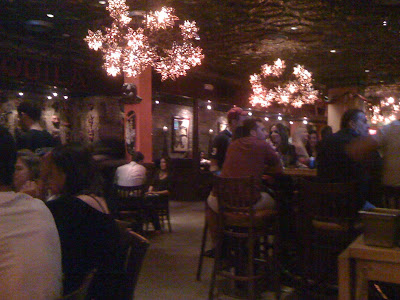 I had to question her about the jalapeno poppers even after she explained that they were made individually and could have the cheese omitted but when I asked her if there were any eggs or milk in the batter she had an "ah hah" moment and the vegan thing came just a bit closer into focus, which I don't mind at all.  Enjoy it sometimes actually.  She asked about the table-side Guacamole and for a half order for $6 who could have said no? 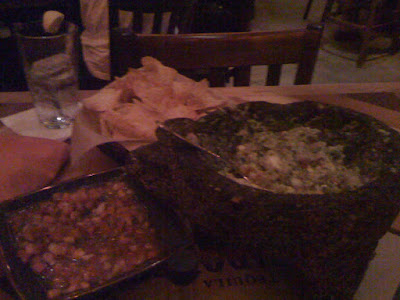 I mean really, in the land of supersize every friggin' thing we had a hugh bowl of chips, a half bucket of pico and a ton of guac.  It was just made, crisp, fresh and delicious with a touch of extra cayenne pepper.

I could probably have stopped there but I talked to Sarah some more and we discussed the rice, (no stock), the ingredients in and the cooking of a vegan chimichanga with rice, beans, peppers, onions, mushrooms and spinach.

It was about the size of my forearm and loaded with fresh tasting ingredients.  I tend to the heat and when the green and red salsas added little more than tomatillo and tomato depth I tried the 2 house sauces.  The made a valiant effort but for some reason I took a tiny bottle of Blair's Original Death Sauce with Chipotle and that definitely gave it the boot in the butt I was looking for.

A frozen margarita to balance the heat, (not that it really does but I find them refreshing), and a shot of El Mayer tequila to sip at the meal's end ... only a cigar might have added to the illusion that I was of the gilded class.

Excellent surprising vegan meal and felt like they cared about my meal.