OK, so first let me tell you this meal was eaten last week. I’ve been pondering this place and this meal for that time and I’ll get into that in in a bit. Today I had an opportunity to return to Darbster. I made a mad dash to the place after borrowing a crew car. I had the keys in my hand at 16:30 and had to be back at the airport at 17:30. That’s 4:30 and 5:30 PM for you clock in the kitchen types.

Last week I had a delicious appetizer and an ok entree. More about that later. I was so looking forward to the sliders since I mourned the loss of the sliders at Sublime, (and told Nanci that). Leo, (an omnivore buddy I used to fly with and who had an appreciation of good food regardless of the protein source), always said that he could sit at the bar and chuck those sliders down with a cold beer for hours they were so good. So I was looking forward to them. In a big way.

I get to Darbsters in 15 minutes. I have 30 minutes to order, take a pic or two, eat and scadaddle. Very doable. Well, not quite, see at 4:45 I was told that the restaurant didn’t open for another 15 minutes. I was invited to have a drink and wait. I said, really? I’m in sort of a rush and could we get an order in now?

Nope, I was told, We’re so far behind that if we put any order in it would just jam up the whole evening. I’m not paraphrasing here. They said I could maybe get a plate of rice and beans but I probably didn’t want that. (I just passed the Havana Restaurant on the way there. Why would I want rice and beans from Darbster? At this point I’m getting so aggravated that lard and beans is looking pretty good. Not really but you know what I’m saying. I can’t get served? Really? But I’m a vegan. I’m one of you. I came here especially to eat MORE of your food and give you a good review!!!  (I didn’t say anything like that of course).  This is the second time I’ve had bad timing with this place but if you’re closed I get it. If you tell me you have the nuclear launch codes and the kitchen will only open in 15 minutes to save the world ok. You got me there pal. But to tell me this is, “... as it says on our website, our downtime ... ” is nuts. You got the signs out on Dixie Highway. You’re open. You just seated two women. And you cant fire an order of sliders like I asked. Nope.

Here you go bucko.  I want to say nothing but outstanding things about you.  I want whoever reads this blog to be blown out of the water and beat a path to your door.  I don't want you to end up like Red Bamboo in New Orleans.  But ...

You’re in the service business. I’m in the service business. I’m a make it happen kind of guy in a make it happen kind of business. I serve some of the toughest people in the business, high net worth individuals, show biz types, businessmen, and none of them, ever, want to be told, “No.” Oh sure, sometimes I have to say no. No, we can’t go there the runway is too short and I don’t want to be the one to make this airplanes last full stop landing. Nope, we’re not going through that thunderstorm so we can see what hail damage really looks like when it’s NOT in a photograph. I’m two hours early so I’m not one minute late. So I don’t get this prima donna attitude. NOTHING is ready 15 minutes before service? You couldn’t offer me ANYTHING? But an excuse that this was YOUR time? Nope, this was MY time. Your door was open and I walked in. You WELCOME me as a CUSTOMER with MONEY to spend ... unless you’re so packed the lines around the block will keep me out until I win the seat at the Governor’s mansion. Nope, you’re not RAO. I’m sad to say this because I like dogs and Darby must have been a great pooch to have the honor of a restaurant named after him but I ain’t coming back.

The reason I pondered was that most of the cooked stuff on the menu is Gardein. Now Gardein is great stuff. It tastes great and has a great mouthfeel. But it’s like saying you serve Boca burgers. Or stuff from May Wah on Hester Street. It’s pre-made. I wanted to ask the chef a bit more about what he/she does with it and what touch of culinary magic, if any, they work with the basic product. I wanted in the worst way a slider!!!  (Ehhh, not tonight, eh?). It’s not like you made the bestest seitan in the world or you came up with some concoction that I just couldn’t live without. You bought some stuff and served it.  I really really wanted to see and taste the "more" factor.  I also want a place that I can call up, order, make a 30 minute dash over and pick up some great food and be back at the airport on my way with a good vegan meal.

OK but there’s a good part to serving that kind of stuff too, right? Absolutely. When all you have is Havana restaurant, or Denny’s or the million other mainstream restaurants in Florida it’s nice to be able to go to a place and not start with the, “...and is the rice made with chicken stock or water? Is there honey in the salad dressing?...” kind of regular litany that all vegans eating out know only too well. So it’s really really really nice to be able to sit down and order right off the menu. Anything you want. Yeah, think about those sliders and beer.

Now, untouched, here’s the review I wrote, (as I ate the meal sitting at the table, laptop open ... a first time for me): 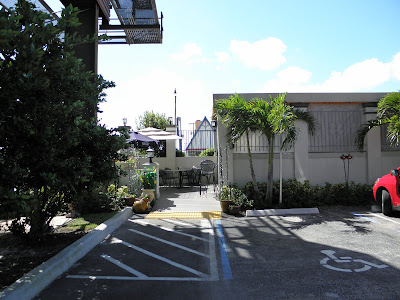 Like an upscale shack but driving up Dixie Highway you really have a hard time finding it if you’re not looking. Well, even if you are looking. I guess not really a shack but it is al fresco with a deck area and an indoor area. Actually it’s quite nice. 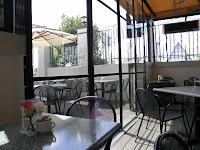 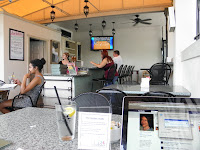 The chef is formerly from Sublime and the menu is heavy on the Gardein. I’m not sure if this is good or bad but simply is their protein of choice.

In perusing the menu, (the lunch menu), I was really happy to see that there were appetizers for $8/$5/$4 which were the sliders, wings and Mac and Cheeze. I do so miss the sliders at Sublime ever since they morphed into a big burger monstrosity...but my waitress recommended 2 things to my, “What would you recommend if I could never ever ever come back here, what should I try?” query:

Fried and lightly crisped Gardein with a nice heat. Not enough for my steel tipped tongue but the batter had a nice  heat lingered.  Combined with the Buffalo Hot Sauce it worked just like it should. 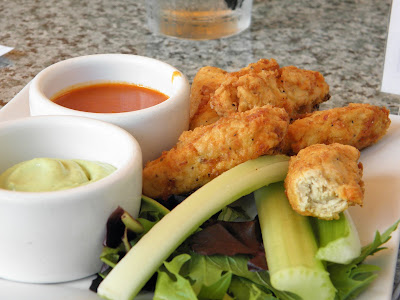 The vegenaise green ranch dressing is a cooler alternative but I was here for the heat baby. It worked very nicely with the few forks of greens, real mixed greens, that I sorely needed after last nights romaine fest.  Gardein has an amazing real "chickeny" feel and this dish is a fantastic appetizer. 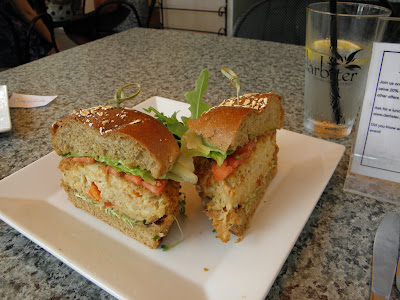 A play on a crab cake that almost makes it. Very close but the crab, (duh, of course), is missing. Maybe it needs sea vegetables or more salt. I love the crunch and would order this on a bed of greens but unfortunately, (and my waitress said she preferred it on just wheat bread). I heard her recommend the bread only to the table behind me but not to me so I got the big thick whole wheat bun. It was a wonderful bun but the crunch gets lost in it and it’s a very light crust so it gets very lost.

All the pieces are there, the peppers, (green and red), and the consistency of a crab cake is quite close but misses the stringy-ness of the crab, although the palm does give the cake the nice bits of bite and the sprouts do step up to play that part. The sandwich is topped with lettuce and romaine which adds another depth of crunch. It also adds some rigidity that smushes the cake down even more when you bit into it, squeezing it out the sides of the bun. I also swore I tasted the crunch of pickle, (as in relish, as in tarter-ish sauce), ever so subtly in the background but I was told not really. 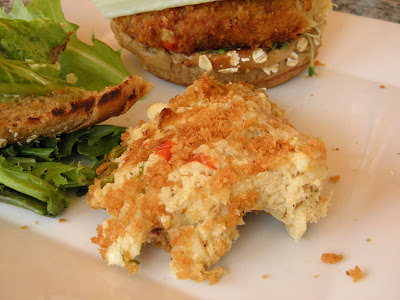 It was a pretty decent lunch and it’s not too long a drive from PBI, (although I was staying in Boca), so I’m sure I’ll be back. It might become my MacDonalds, quick stop in PBI, gotta grab lunch, but with no air conditioning, perhaps not a place for a longer sit down meal.


And that was the original review.  If you go make sure you find out when they serve because although this place purports to be casual they do not have anything close to, "drop by if you're hungry," hours.