A revisit on July 30, 2011 results in a very satisfying meal.  The parking lot was more crowded, the proprietor much friendlier and it was earlier in the day.

My other pilot, who chose the place for our diner because of its vegan offerings, had a bum first glass of wine but rectified it with a whole bottle of a much better brand.  My Tsingtsao was perfect.  So was the next order of wine.  And the next Tsingtsao.

He went his animal food ways and I stuck, of course, to my vegan food.

I tasted his pan fried dumpling which was a nice mixture of flavorful veggies but the sear brought a smoked flavor to the party.  Something I don't experience since I always get my dumplings steamed or boiled.  Nice change.

My Boneless ribs were a meaty chewy protein covered with typical chinese restaurant sweet BBQ sauce.  The meat was a bit chewy but it was a satisfying dish. 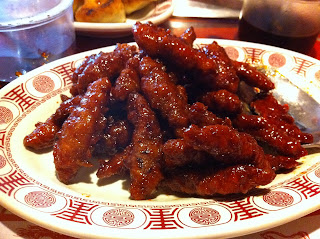 For my main dish, I asked for the chicken kew with lots of veggies.  I had mushrooms, carrots, onions, broccoli, and bok choy in a deeply earthy brown sauce.   I doused it with hot chili oil and it was perfectly spiced for my palate.  The chicken was amazingly tender, meaty without being chewy and soft without being like Aunt Minnie's Matzo Balls. 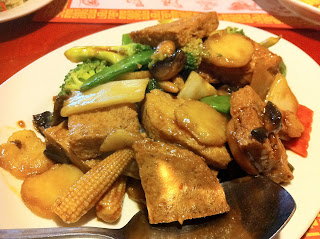 I ordered the shrimp fried rice and didn't care for the shrimp at all.  It was a very tough rubbery rendition of the real thing with a tinge of saltiness.  The fried rice was delicious but next time I'm going to go for the ham. 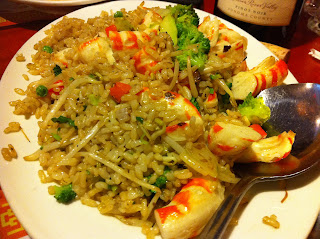 $41 bucks plus tip with 2 beers.  A typical mock meat Chinese meal in interesting sauces,  satisfied my craving for a flavorful vegan meal.


Original post:
9/2010
Another selection from Vegout and after being in a place for a few days you're just looking for a meal. Every meal isn't going to knock your socks off but you just want good honest food.

I drive up and the parking lot is empty. Well, there is one car right outside the restaurant. 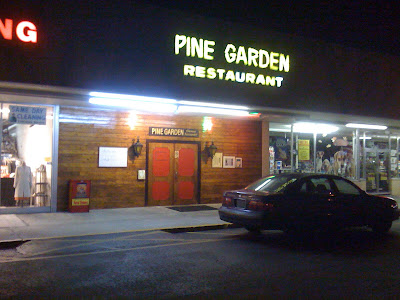 The sign just says, "Pine Garden Restaurant." Now for all you know they might serve air freshener here.  Lucky for me they didn't but the inside was like stepping back into Polynesian Paradise sans the Luau.  Bamboo and I suppose Pine everywhere.  I sort of liked it.  But it was empty.  Empty. 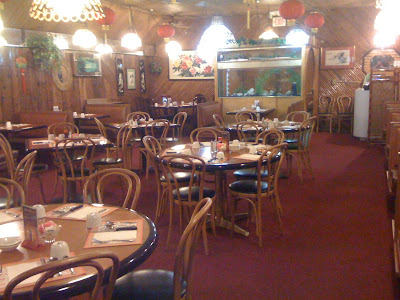 So I always worry about how fresh stuff is when I see this kind of volume.  I was greeted by a guy.  You know, every family restaurant has one.  He's the guy, the family is gone, kids in bed or home with mom doing homework, almost every one is gone and he's counting up  receipts.  Or on a day like this maybe counting up receipt.

So I figured I'm like the hero diner now and I'd be greeted with open arms if not a welcoming parade.  Nope, he says it's 930 and they close at 10, can I finish in time.  Awwww, I really am trying to give you my money here.

I say sure and think I've eaten more in less time and what the hell, they have a friggin' VEGETARIAN MENU, (strictly vegetarian it says).  I double check and vegify.  Yup, no animal products at all in any of the items on that menu.  Great.

I start out with the Teriyaki Beef on a stick.  It's wheat gluten.  I find the size amazing, since I'm expecting something like the satay at Candle, (see pics in the Candle review).   4 hugh skewers.  I think they're a little tough and chewy.  I'm not sure this is bad but it's not the mouth feel of a beefy item I was expecting.  As far as the taste it was more like a peanut sauce.  I also thought it tasted like it was coated with corn starch for a crust and then just a scosh undercooked. 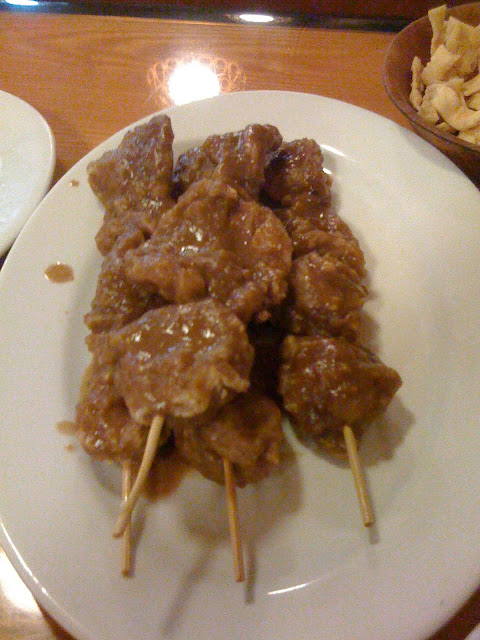 But it was tasty, salty, chewy in a jerky kind of way and if I put the disappointment of Teriyaki Beef Skewers out of my mind wasn't half terrible. 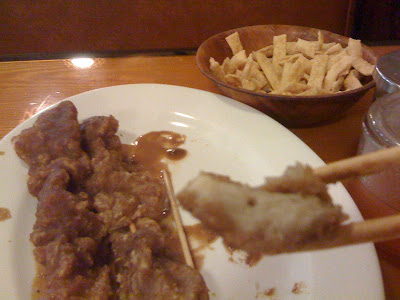 Next I had a House Fried Rice with pork (gluten), chicken (soy), and fake ham.  That was great, a nice subtle flavor and seasoned just right with flecks of each of the proteins and some broccoli florets, onions, carrots and peppers. 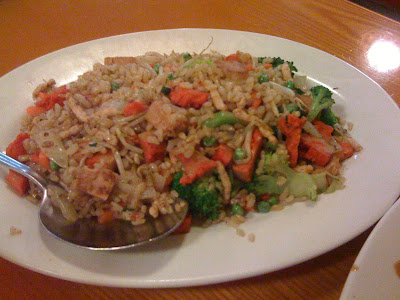 My entree was a Pork in Garlic Sauce.  I enjoyed everything except the pork which was a glutenous, more rubbery texture than I like in my gluten.  I've had this before and just don't care for it but had it come with the ham or chicken in bigger chunks than were served in the rice it would have been an excellent dish.  The veggies were all fresh and crisp except for the chestnuts which, as is usual in chinese restaurants, was definitely canned. As it was I had no trouble eating half of it and taking the other half back to my room.

I thought this needed another go so I went back with the other (carnivore) pilot 2 nights later.