I love three day trips when they leave me alone for the middle day.  Arrive one night, have all day to explore and go home the third day.  And I get a rental car which I don't always get on quick "wait and returns."  Such was the case in Toronto the other day.  I had planned on eating at a veg buffet downtown called Commensal but sort of got shanghaied and sat at the Marriott restaurant enjoying the company of another crew who was leaving that night and didn't want to go downtown.  Unfortunately all they had for me was a Hummus and Babaganoush dish, (which was bland and I needed to salt and pepper).  I sat while everyone else ate and finally made a mad dash downtown.  I forgot my GPS as this trip was not scheduled and "popped up" and didn't want to turn on my phone as data charges can be just the other side of nuts.

We made it to Commensal about 3 minutes after they closed.  After springing for $10 (US!!!) for a $10 (Canadian) parking lot fee, (It's not the ten bucks, hey, I live in NYC and pay for parking all the time but their credit card machine was "out" and I didn't want a bunch of Canadian money from the ATM across the street and the exchange rate, when in Canada's favor is ALWAYS charged but not...well, it was the principle of the thing),  I figured, "what the hell, in for a penny in for a pound," and turned on data roaming.  Vegout said Spring Rolls was a block away and it was open. 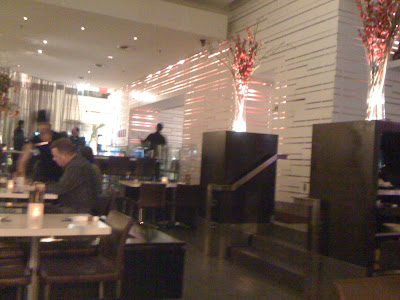 I thought the place was way too slick and upscale but when I went into my vegan shpiel and the waitress pointed out this ...


I'm always a little disappointed when there isn't a tempeh or seitan or vegetable protein fake "meat" but tofu is certainly always available in any Asian restaurant I've ever been in so I suppose it's an old faithful.  Still, and don't get me wrong, just seeing that there is enough care and concern to specifically label the dishes vegan goes a long way in my book, I wish there was more than just tofu.

The dish was more colorful than this nighttime picture shows and the veggies were cooked to perfect crispness.  The sauce was flavorful and although the menu had a little pepper next to the description I asked for hot chili oil.  I got Sriracha which is not exactly the flavor I wanted but was good and that cranked it up a bit.  The noodles were rich and earthy and thick and chewy and just what I wanted.

This with a cold beer, (on sale), took the edge off my missing my first choice and still provided a decent vegan meal.  With so many vegan choices in Toronto I'd be hard pressed to recommend this as a first choice but would go here as the vegan in a group any day.