Sometimes you just end up going to a place that you wouldn't have chosen on your own.  I had the opportunity at a wedding Reception Dinner to sample some chef creations at Crush, a "trendy" casual restaurant in Baltimore.

I had phoned ahead a couple of weeks ago to specifically let them know I was going to be with a party and I'd like a vegan meal.  At the dinner when orders were being taken I just told the waitress I requested a vegan meal.  She asked, "for the appetizer?"  I said, "The whole meal, just bring me what you've got," and that was it.  Nice and easy.

There were 3 courses.  I started with a gazpacho.  Crisp, garlic, tomato, oregano.  Nice.  I almost forgot to take the picture.  I could have used something other than soda crackers but I did hit the foccacia and olive oil.  I'm still going under the assumption that it's a yeast bread and shouldn't have any animal stuff in it.  (Here's where that question about 100% comes in.  See my facebook group "NYC Vegans and vegetarians" (that's vegans with an 's'), for the discussion questions).

The salad was arugula, avocado, and compressed watermelon.  I thought the watermelon was a clever idea but I preferred the texture of regular watermelon although the balsamic tied it all together.  I totally forgot to take a picture.

On to the entree. 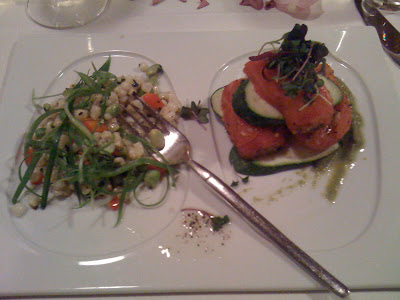 It was a very nicely plated vegetable dish.  The waitress announced each dish and the ingredients as she put it down, very nice touch of elegance.  This dish was roasted corn and peppers with edamame and scallion slivers and which had a wonderful roasted flavor which played nicely with the sweetness of the corn.  The Napoleon of zucchini and tomatoes was a nice combination of textures and muted tastes and the micro-greens added a bit of sharpness.  Warmed tomatoes are not my favorite but applaud the chef's creativity and diverse offering.  The avocado puree did add a rich creaminess and played very nicely with each bite of veggies. 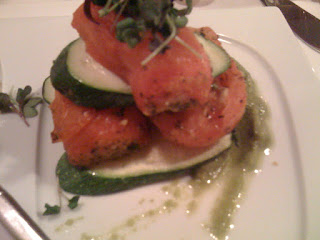 Dessert was a sorbet which I found a tad on the sweet side but perhaps that was my anti palate revolting against the visuals of all of the other chocolate desserts.

All in all it was a very thoughtful and creative endeavor by the chefs and aside from a lack of any real protein aside from the veggies fully met all hopes of flavors.  I think that if you're going to serve only veggies you have a perfect justification for super sizing portions lest they look like side dishes on a plate but perhaps even more creative would have been to seek out a way to get those proteins in the entree with either a bean or tempeh or seitan selection.  I know chef's aren't versed in using these items but it's always a hope, wish and dream that mainstream chef's are locked in a vegan restaurant for a complete service and forced to taste everything that comes out of the kitchen.

Although I wouldn't recommend Crush if you're a vegan searching for a meal I would definitely say that being a vegan at this dinner was a most comforting experience.  I hope more chef's can duplicate the flavors offered to me at Crush.  Also, I didn't really look at the regular menu and don't know if what I ate was normally offered.  I didn't look over and see what I ate as  sides on other entrees and I do give great credit for preparing my food especially for me, (or giving me that illusion).