So we find ourselves in Nashua, NH visiting our daughter in camp and HappyCow came up with a list that we narrowed down to two.  One being closed on Monday left us with an easy decision.  Vietnam Noodle House advertises a vegetarian menu.  I hope they can "Veganize" it for me but when I look at the menu and I see "OUr strict vegetarian uses no meat, dairy, or eggs," it does bring a sense of relief as we've all had those, "hmmm, this DOES taste like chicken broth," moments after assuming vegetarian mean exactly that.  Yes, I know, that "assume" thing again.
One of the reviews said the restaurant was "spartan" and "had no ambiance."  I don't know.  I have eaten great food in more spartan surroundings and had lousy food in well appointed places.  I like it when a place is pragmatically food centered and I didn't object to the trinket display case as another reviewer did. 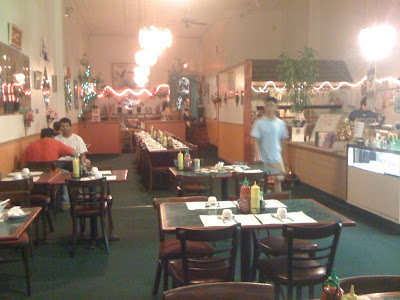 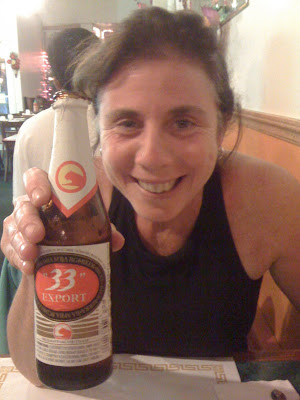 I started with the Vietnamese beer which I thought tasted a bit "thin".  It was usurped by a very tired looking Carol.  The result of a long day of driving for sure.
We really wanted to sample many of the dishes so ordered like gluttons with the excuse that we'd have lots to take back to the hotel room and put in the fridge for our daughter, (who is a vegetarian), as she said only 2 out of the 3 people who cook at the camp take her vegetarian requests seriously.  Excuses excuses, we wanted to taste lots of stuff. 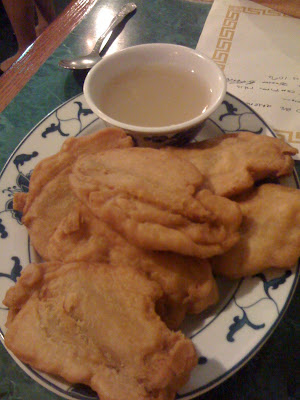 Our fist appetizer was the Tofu Chicken Fingers and this was a battered tofu.  I enjoyed the texture of the batter in the center of each piece of tofu but it was a bit thick and harder on the edges.  The batter itself had a nice flavor, a bit of sweet and made a nice combination with the sweetish lemony dipping sauce. 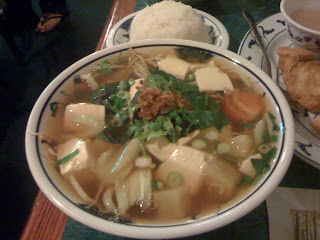 The Vietnamese Sweet and Sour Tofu Soup had a nice mix of perfectly cooked veggies which still had a nice crunch, a complex flavor with a heat that hit the back of the throat after each spoonful.  This dish was a meal in itself.  The brown bits on the top are crispy onions. 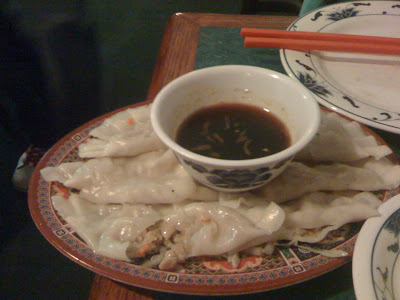 Dumpling were standard veggie filling with a nice thin dough and a soy/vinegar/ginger dipping sauce. 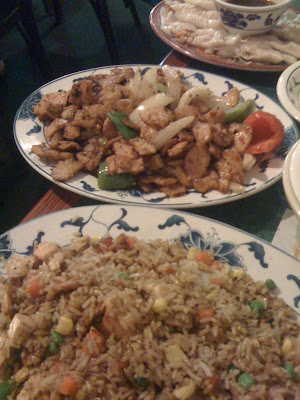 Our house special fried rice had a bit of all the mock meats.  I wish it had big chunks instead of bits but was reminiscent of the flavors I used to enjoy in my past meat-eating life.  One of the flavors was a very smoky flavor.  I'm not sure which of the meats had that but that was my least favorite flavor in the rice.  In the background of the picture is the Mock Chicken Stir Fried with Lemongrass.  Now that was my wife's choice.  I've never had, (I know I know), lemongrass before so I can't tell you if it's wonderful peppery overtones were from the lemongrass or from, well ... pepper, but it was a great dish.  Tons and tons of the mock meat interspersed with stir fried veggies. 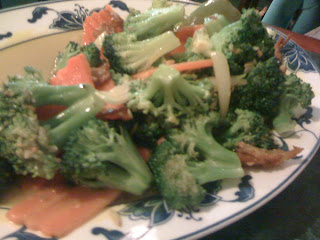 I contrasted the Mock Chicken Stir Fry with the dish I ordered.  I'm a seitan junky so ordered the Mock Chicken or Beef with Curry Sauce and substituted the Seitan.  Pretty much anything I asked was answered by our young waiter and although asking for our water twice aside, the service was excellent.
The seitan was delicious and crispy and flavorful.  The curry was a delicious undertone, not an overpowering sledgehammer of flavor and the veggies were crisp and perfectly cooked.  My only complaint was that as much mock chicken as was in the lemongrass dish was made up for by the lack of seitan in this dish.  As you can see, there is one small piece in the picture on the right side of the plate in the front.  I ordered a side of seitan to go and it was only $2.00 so this could have been addressed in the kitchen.
With a tip our bill was $58 but we left with a hugh shopping bag full of food.  What we had wrapped was easily 2 more meals.  I thought this place was a great value and had great tasting food.  If I lived in Nashua it would definitely be on my "eat here, eat often" list.
Posted by Marty at 6:37 AM