I had a few extra hours before my 10PM departure from Midway, a rental car, and after reading a few online reviews add to that a big dose of curiosity.  I'm also searching in earnest for something closer to Midway Airport not always having the time to go downtown.  Not that this necessarily fit the bill mind you.

Back in the day, (1975?), I used to eat at a place in Rochester, NY called Smitty's Birdland No. 1 which was across the bridge from the U of R.  It wasn't in the best of neighborhoods to say the least but the food was great and college budget priced...and heaped on the plate for college appetites.  So no stranger to traveling alone to ethnic neighborhoods I figured, "What the hell?"

Soul Vegetarian East ... way south in Chicago.  I had thoughts of Jim Croce and Big Bad Leroy Brown and why where he came from was referred to as, "the baddest part of town," as I started my trek.  Through some hinkey neighborhoods with boarded up buildings and then further along on 75th it seemed alright to me.  I have never had a problem growing up in Brooklyn and taking the subway through every bad neighborhood in NY or eating at the Vegetarian Juice Bar on 125th Street in Harlem, but in a different city you really never know what you're going to get.  It was fine in my book although I do fly with a guy who got so scared in the Mission District of SF that I thought his head was going to explode while I was looking for a veg Philly Cheese Steak a couple of years ago.  This definitely wasn't a place for him.

The neighborhood was fine and I got a spot almost right in front of the place which is pretty easy to find.  I was greeted warmly and sat at a table by the window.,No,  not to keep an eye on my car but because I am tired of dark unlit food pics.

I ordered the dinner special for $11.99 but unfortunately they were out of the Lentil Carrot soup so I got the veggie noodle instead.  I also ordered 2 sandwiches to go for the red eye-ish flight out of Midway at a rolling departure time of between 2130 and 2330.  I so wanted a BBQ twist sandwich but they were out so I ended up with the Prince Elkannon (Garvey) Burger.   I generally shy away from burgers but I had a few bites in the plane and downed it later at 3am and it was divine with sauteed mushrooms and onions in a sweet whole wheat bun. 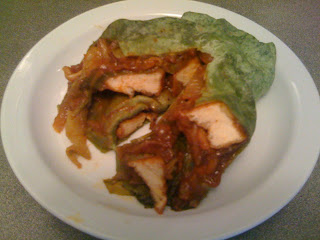 Later I also had a few bites of my Jerkfu Wrap, (a caribbean delight made with sautéed onions bell peppers and our specially seasoned jerk tofu, wrapped in a spinach tortilla).  This sauce reminded me of the sauce boneless spare ribs used to come in ... sweet and succulent.


(THIS PICTURE IS OF THE HALF THAT MADE IT HOME, SPLIT SO YOU CAN SEE THE INSIDE).


(I HAVE NO IDEA WHY I CAN'T CAPITALIZE ANY MORE BUT JUST A HEADS UP, IT ISN'T ME BEING LAZY.)


BUT BACK TO DINNER.  MY SOUP WAS A TAD ON THE BLAND SIDE WITH A PREDOMINANT FLAVOR OF CELERY AND THE PIECE OF CORNBREAD WAS ON THE DRY SIDE.  I DID PUT IT TO GOOD USE MOPPING UP MY BBQ SAUCE FROM THE SEITAN THOUGH! 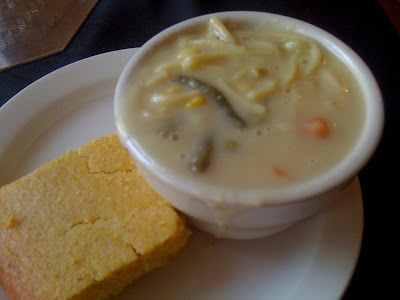 THE FIRST THING I NOTICE WAS THAT DINNER WAS SERVED ON A 9" PLATE.  I WAS SO PLEASED THAT FOOD WASN'T SERVED ON A PLATTER AND THAT I COULD ACTUALLY ATTEMPT TO EXHIBIT SOME SELF CONTROL...AND THE SECOND THING I NOTICED WAS THAT IT LOOKED DELICIOUS.  (ACTUALLY I GOT MY SOUP AFTER THE DINNER PLATE WAS PUT DOWN). 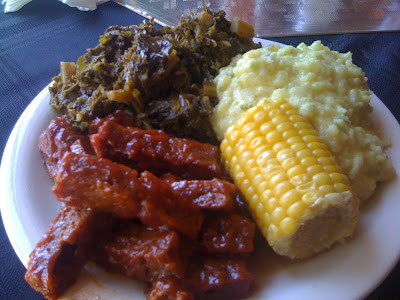 THERE WERE SO MANY COLORS AND THEY WERE VIBRANT.  THE POTATOES WERE CHUNKY WHICH IS THE WAY I LIKE THEM AND HAD A LITTLE BITE TO THEM.  I COULDN'T FIGURE OUT THE FLAVORS AND THOUGH MAYBE VINEGAR.  I ASKED THE WAITRESS AND SHE SAID, "PICKLE JUICE".  AHHH, MAHVAHLOUS DAHLINK.


THE KALE, OH MAN I LOVE KALE AND ALTHOUGH ATE MOST OF IT IT WAS A TAD OVER-SALTED.  THE CORN WAS DELICIOUS BUT A LITTLE OVERCOOKED AND MUSHY.  IT WAS SO GOOD though, I ABANDONED MY USUAL TECHNIQUE OF EATING CORN ROW BY ROW WITH MY BOTTOM TEETH AND JUST CHOWED DOWN ON IT. 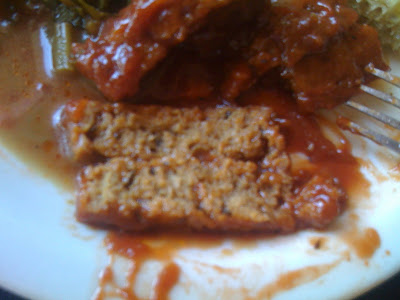 NOW THE SEITAN... MAN IT WAS LIKE EATING MY GRANDMOTHER'S MEAT LOAF A HUNDRED YEARS AGO.  IT HAD THAT PERFECT MIX OF TEXTURE, SOFT YET WITH FAMILIAR TOOTHINESS.  AND IT LOOKED SCARILY REAL TOO WITH A NICE RICH TASTE.


The whole bill with tip came to $30 so if I have the time and the right copilot I'm heading here again.  This place should be a chain.