Out for dinner at Blockheads, NYC

Sometimes you just don't feel like cooking and in searching for a place that would cater to my wife's omnivore cravings and my vegan desires we ended up at Blockheads on 2nd Ave between 81/82 Sts. 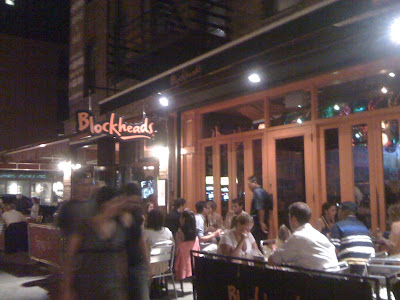 I was captivated by the 100% vegan cheese, tofu sour cream and grilled tofu substitutions blatantly advertised on the menu.  How dare you tease me, allow me to put my restaurant inquisition aside for a meal.

Dare accepted, you're on!

We had about a 20 minute wait according to the hostess and that was at 7PM on Thursday night.  Man the place was packed...and after wandering around looking for a bar, (hey, for her ... I was still on call), we gave up and decided better to not miss our names being called and going back to the bottom of the list.  So, about 20 minutes later we got our table.  Now Blockheads isn't your quiet Mexican place with moments of Mariachi Band, it's your typical NYC loud, boisterous, don't come here for intimate conversation kind of place.  I know, the kind of place I loved when I was in my 20s.  But really, we sat next to each other, (awww, I know), and conversation was easy.

Starting out with a Quesadilla I changed it to Whole Wheat and ordered the soy (vegan) cheese with roasted corn salsa and sauteed spinach.  It was hugh!! 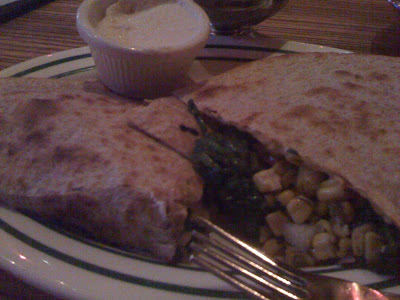 It literally was spilling over the sides of the plate and you can see the tofu sour cream in the little ramekin.  The sour cream didn't really taste like sour cream but had more of a hummouy consistency with a slight lemon tinge.  It served its purpose nicely though and cooled down some of the heat from the hot sauces I tend to pour over everything every other bite or so.  Sometimes.

The first thing was how nice and crispy the tortilla was, not soggy at all, and my first sensation, to be repeated later, was how creamy the cheese was.
It was followed by the rich flavor combination of the corn and spinach.  First dish of the night, a big hit.

Next, for some reason in my mind, Mexican turned into Caribbean and we both ordered the Jerk Burrito.  She, the real thing, and I the tofu after being assured the jerk flavor would come through very well even though the tofu wasn't marinated in it.  Our waitress was right. 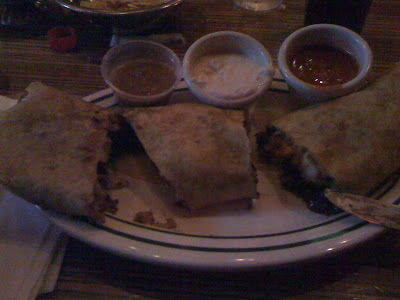 Even though it wasn't as hugh as the Quesadilla it was still a big burrito.
Here you can see the 3 sauces: extra jerk sauce, tofu sour cream, and salsa.

I tried to show the tofu and bean and rice and cheese but it was a bit dark and the iPhone did as good a job as it knew how.  I should mention that I told our waitress I wanted to make it vegan and she prompted me for the whole wheat tortilla, soy cheese, and brown rice.  Great.  I chowed down and it was delicious.  Creamy and flavorful with a nice crunch also.  The tofu, although I think when you eat tofu you can usually tell it's tofu really didn't mind being tofu in this burrito.  It was smothered in Jerk sauce and there was more on the side.  I got a distinct taste of tamarind and other fruitiness like mango or papaya and with some heat added and some cool from the sour cream and the soy cheese; it was one of the best burritos.  Also knowing it was vegan, as it usually is, is just so relaxing. 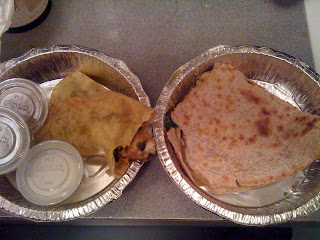 So, when I got home, as I often do when I get to a place with more light, I take a good close look at the food and do a little bit of deconstruction.  Here you can see, I think, that the burrito has a much paler, more yellow color than the quesadilla so maybe it wasn't whole wheat.  Ok, not the biggest deal in the world, I'm just saying.  Anyway, I asked about desert and was told there was a brownie, a chocolate chip cookie and flan.  Flan?  Hmmmm.  "Are any of the deserts vegan?" I asked.  With a sort of puzzled look and a shrug I was told timidly, "I think they might not have any oil."  Hmmmm.  Ok, ditch the desert.  I was a bit sad about this but with no hot beverages coffee was off the list and I asked for our check.  We did have half our food to take home for a bill of around $58 with one drink which isn't too bad for Manhattan.
I'm going to give this place another try as I thought the food was really good (and they definitely have a drink on the menu involving an overturned beer bottle in ... well, you have to see it but I have to not be on call to try it), but I do want to be sure to address the vegan issue before hand.  I am reasonably certain I was served vegan food but if it's advertised on the menu I like to know that my wait staff knows what I'm talking about.
Posted by Marty at 8:37 PM