Billed as one of, if not the, premier dining establishments in Bozeman I figured why not drop in and see what was on the menu.  Of course they had just closed for lunch but the door was open, (go figure, Montana right?), and the chef was there.  I asked about vegan dishes and he said there were vegetarian items but they frequently had this request and would come up with a dish that would fit the bill. 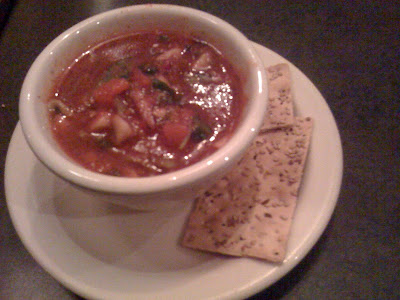 I haven't had Gazpacho I think ... ever, so what I was served might be the most mediocre Gazpacho in the world.  If that's the case it is one of the best cold soups, (next to the memory of my Nanny's borscht of course), I have ever had.  It was chilled, crisp and fresh.  I tasted real tomatoes the way a tomato should taste and feel in your mouth.  Crisp onion.  Parsley.  Great way to start a meal after a rather warm day.  Refreshing is the word. 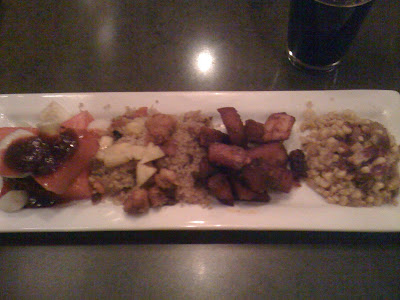 This was a hard picture to take because the lighting was dim but it is a beautiful plate.  It was creative and original ... and delicious.  So, I attacked it from right to left and then all over.  Corn with caramelized onions and chili , roasted beets with chipotle dusting, Quinoa with pineapple, raisins, and squash.  And on the far left, which blew my mind, was watermelon with a reduction of raspberry and parsnip.  I didn't get the parsnip but who cared, it's was a great combination of opposing flavors that crashed and danced on the palet.  Wow.  Now this is what I call changing a menu for me. 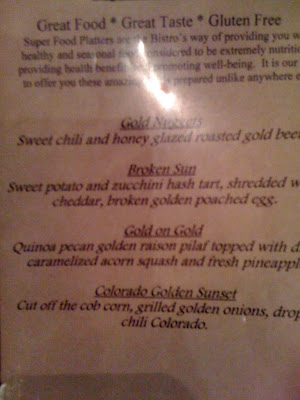 This was the original menu and you can see what the chef did to make this vegan for me.

The Super Food Platter.  You just have to love the name.
I also ordered the Tofu Fried Rice.  This dish was predominantly soy flavored.  The chef eliminated egg and it was a nice side.  I didn't do back flips over this but I can't really remember doing back flips over fried rice.  It was a nice side, flavorful, with a nice rice texture and the crunch of perfectly cooked veggies.  Our waiter didn't mention that a full order is $12 and a half order is $10.  So had I know I would have ordered the whole thing for 2 bucks but in the end I was charged half price for half an order. 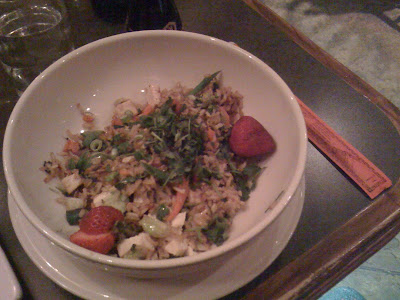 Now I take a quick look at the dessert menu and this might be a double edge sword.   Vegan it is so my heart went out to a food memory.  It's been so long since I've had a great Mud Pie, this really was one of the first times I can remember wanting and not having something because it wasn't vegan.

Definitely recommend this place if you're in Bozeman.
Posted by Marty at 10:08 PM