I'm in my semi annual training now so I'm fitting this in between class and simulator rides. 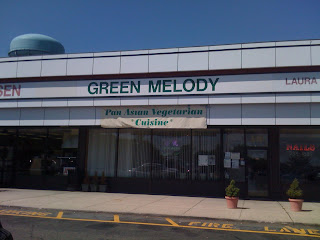 Amazing food is all I'm going to say for now and 100% vegan.  It's a little strange that the menu says Vegetarian and Vegan but everything is Vegan but I was told that some people don't understand what vegan means.  OK, I'll buy that.  The menu also has little "v"s next to the meat names...chicken, beef, etc.  I wondered about this too and was told that some people don't realize the protein is vegan and not the real animal. 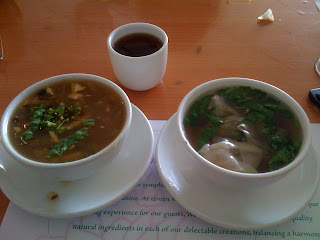 The hot and sour soup was delicious with just the right amount of heat working up the back of my throat.  Not too vinegary as some I've had.  I would have preferred some scallions to the cilantro, (and I like cilantro).  The wanton broth was earthy and rich with bok choy.  The wanton skins were tender and the filling I thought was definitely a veggie filling, not a mock meat attempt...not that thats what it was being sold as.

I've had these before and although the taste was there with a light crispy outer layer I felt the meat of the mushroom was more "stemmy" and chewy. 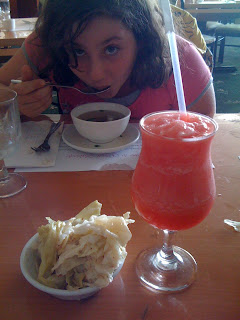 The kid thought for a second I was going to grab the watermelon smoothie.  She was right.  It was the way a smoothie should taste, like the fruit it was made from and not like the sugar monster was let loose with a blender.  I'd let her drink these all day.
The picture of the appetizer platter for 2 (which fed 3 easily), didn't come out.
Interesting thing about these 3 dishes.  The sesame chicken and sweet and sour beef were both breaded and fried dishes but there was a variance between each piece.  Some had a thick and tough breading, some were soggy, naturally after sitting in the sauce, and some were just right.  Puzzling, but the breading needs more consistency in my book.  Not that I wouldn't order this again, just saying.

Now the curry really surprised me.  Each piece of "chicken" was moist and succulent.  The sauce was a very pleasant curry flavor, not unbalanced in any one spice, and lent almost an undertone of flavor.  It was the best entree I thought. Dessert...well, dessert.  If I didn't know, I mean, wasn't told that this cake was vegan I'd never believe it. And to simplify what I seek when I eat out to be ... well ... it doesn't taste Vegan is wrong on so many levels but well, it did and it was.  Vegan food has bad rap.  This will change that rap.  The ice cream, sans cream was just amazing and paired so nicely with the chocolate.  Oh, it was walnut ... I think.

Good go to place for a vegan chinese meal.  On my list for sure.

OH, and Google local maps on my TOM TOM Gps showed this place as closed.  IT'S NOT CLOSED but the website on their business card www.greenmelody.com said unable to find server, so as of now, that is down.