Where the stars eat in Jackson Hole, WY

In another life I had money.  I ate wherever I wanted and half the time didn't look at the check, just handed over a credit card and was done with it.  I don't eat at places like that anymore but if you work on one of the big holidays the company I work for buys the flight crew dinner as a concession for being away from family.  Since the Four Seasons was all booked up we ended up here, at Amangani.  Our waitress said just the other day Bill Gates was sitting out on the deck so I knew I would fit right in.  The place is typical Big Sky, Big Game style.  Lots of wood and timber, stones and expansive subdued opulence. 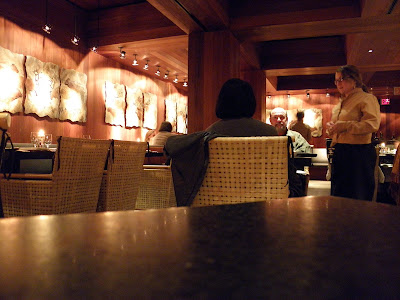 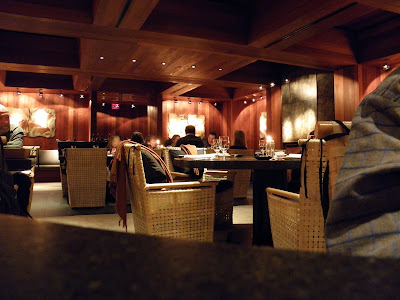 Two views of the Amangani Grill

The other pilot told them when he made the reservations that I was a vegan and to please prepare a dinner for me.  It was a prix fixe for Thanksgiving and I was very curious to see what the world class chef would have served to, oh, I don't know, Natalie Portman?

First of course the bread and butter was set down.  Hmmmm.  I asked for some olive oil and it came with a little pitcher of balsamic.  I then noticed that the table hadn't been speared with the "VEGAN HERE" pennant so as I thought, "Nah, no way here, in THIS place," I asked, "Is the bread vegan?"

Do you know it wasn't?  If I really WAS somebody who had any clout in the world of high priced influence I would have made a big deal ... and told all my rich friends to give Nevis or St. Barts a try next winter instead of here.  Just because.  A place like this should have thought of EVERY detail.  Vegan isn't a strange word here.  This is a place where the suites go for between $565 and $4800 a night.  Seriously, you can't make sure, with 8 hours of advanced notice, that the bread is vegan too?  But ... I said nothing.  I wanted to have a relaxing evening.  Fighting the demons that lurk below the surface to remain submersed and let things flow off my back.  Aikido.

Soup this time of year is going to be some kind of squash and tonight it was a Pumpkin Puree with Fennel and Brandy.  There were some strings of something on top with a sage leaf.  Now this is embarrassing but I tasted the strands, chewed them, felt the heat well up, felt the familiar consistency in my mouth and couldn't for the life of me recall the name of what I was eating.  I asked and of course, (head slap here), it was ginger.  (Alzheimer's?)  I knew that!

The soup was creamy and tasted of pumpkin.  I really didn't get a hit of fennel but did get a hint of brandy.  Good, but didn't knock my socks off.
Next was the salad.  Fresh greens with pear and walnuts and pecans.  The bleu cheese was of course omitted but once again, good ... but it was just a salad, properly dressed, fresh and salady, but nothing really original here.
Time for the main course.  Now you know they had turkey and wagu beef and steelhead trout so I was wondering what amazing thing the chef would conjure up for me.  This was a nicely thought out dish.  It was beautiful.  A base of yellow beets scalloped in a round with a mound of forbidden rice, chanterelle mushrooms and topped with lightly cooked heirloom tomatoes.  This dish offered textures and tastes.  It was a great vegetable dish.  It was creative; much more than a bunch of sauteed up veggies dumped on a plate, yet, it was still a plate of veggies.

Classically trained chefs think of us vegans as veg heads.  Some do a fantastic job of working with vegetables, as evidenced here, but it seems hard for them to think outside the box.  Combining a bunch of side dishes beautifully on a plate is still, well, a bunch of vegetables.


I don't think I'd ever had forbidden rice before.  It was crunchy, toothy really, in a tempeh sort of way, (not an undercooked sort of way), and added a nice earthiness to the dish and a contrast texture to the veggies.

Now onto dessert.  I think the dessert was the high point of the meal.  I just figured on a bunch of fruit and they could get rid of the pain in the butt vegan but this was a plate of mixed berries with 3 different sorts of sorbet.

Although the flavor of the fruit was less than stellar, (fresh strawberries in the middle of the winter in Wyoming?), the sorbets were all outstanding.  I really didn't get any tarragon but the other flavors all came through and I wish they had a bigger scoop in the kitchen. 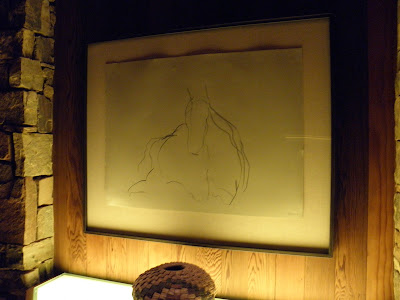 For $65, (regular prix fixe was $50, so I got charged $15 for being different.  OK), I don't think my meal was really any better than any other I have had.  The entree was a creative and well cooked dish of vegetables, and you know how I feel about that.  The soup was just a good puree, nothing that knocked my socks off and the high point of the meal was the dessert.  The cab driver said this was the best place in Jackson, even better than the Four Seasons.  I had incredibly high expectation for the best vegan meal I ever ate.  I do want to say that the service was stellar, outstanding and attentive to every detail.  That was definitely 5 star but my dinner was not.

Although nothing in the meal was, "bad," I see now why people who have a ton and a half of money and stay at places like this travel with their own chefs.

snobby, full of yourself and outrageously, ridiculously AWFUL attitude.

Can't please all the people all of the time Jeanie. I'm sorry you feel that way about my attitude. I just expect a better meal at a place like this than I got. If you feel that's an awful and snobby attitude you've every right to your opinion. Best in the New Year.
Marty

Thanks for your review Marty, honest and to the point. I think it is interesting they cater to stars and a number of stars are vegan and would be was less nice than you with their attitude. I will avoid this place when I am in Jackson. Sounds like Jeanie has the AWFUL attitude!