What people who don't live in NY don't realize is the preponderance of available food.  Any big city really has it and that can easily shape your eating habits if you have a life in which you need to accomplish, well, anything.  And the choices, oh man.  I have to go ten city blocks to get to Gobo or 14 blocks to get to V-Note but if I walk to the intersection on my corner there are 4 city blocks.  Each of those blocks has 4 sides and if there aren't 40 places to eat or buy food I'd be surprised.  I may just count tomorrow and post a comment.
That is to say that we order take out, (or depending on where you're from, take away), or just plain old eat out a lot.  There are 3 of us plus a dog and a guinea pig in 1100 odd square feet with a kitchen that is of the size that someone can barely slide behind you if you're cooking at the stove.  (If you like them it's a good excuse to come to a halt behind them but that's another story for another day.)  Anyway, you have to choose, open the dishwasher or open the fridge.  Or open the fridge first and then open the dishwasher  but of course then you can't close the fridge unless you close the dishwasher ... you get the idea.  So there isn't this expansive kitchen and tons of storage space.  Someday I'll take a pic of the environment so you all can laugh.  It's a small stove too but all 4 burners work.
I just wanted to explain why a lot of my cooking starts with someone else's work, as did tonights dinner.  Then again, this dish could have started with dried pasta and a saute but to me it's like making the seitan or buying it.  The quality may be different but the concept of putting together a flavor and texture profile is the same.
We had a ton of whole wheat penne with sauteed onions, mushrooms, and peppers in the fridge rapidly approaching it's eat it or toss it ultimatum.  I drizzled some olive oil in a fry pan and tossed in the pasta.  I wanted some more green stuff in it since when I made this dish the other night I used up the remainder of the escarole in garlic and turned it into something Indian with spices and Garam Masala.
I tossed in some frozen peas and some broth from the seitan I had made a few nights ago.  My daughter wanted Italian flavor tonight and I have a jar of a spice mix I use for that something extra.  (I got it from the Fresh cookbook but it's basically a bunch of dried spices you like; oregano, thyme, rosemary, marjoram, etc.)  I threw in a few pinches ground between my fingers along with some crushed red pepper and let it stew under cover for a few minutes.
Another thing my daughter loves are the TVP chips from MayWah on Hester St. after I hydrate them.  Tonight I used some seitan broth and tossed in 2 different kinds of chips, let them soak and get soft and before she could finish eating them out of the bowl threw them in as well.
It looked a little grey and drab so I took some tomato paste and some more broth and tossed that in.  Now I had some color!  "Still more!" said the wizard of the vegan kitchen.
I grabbed a handful of parsley from a bunch I had sitting with the cilantro in a container with a little water in the bottom and chopped it up for some more garnish and here's the result. 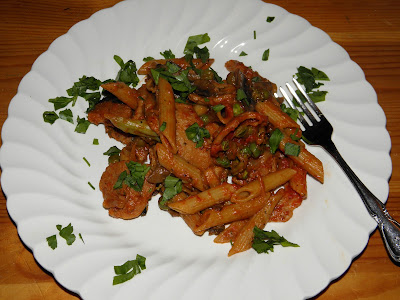 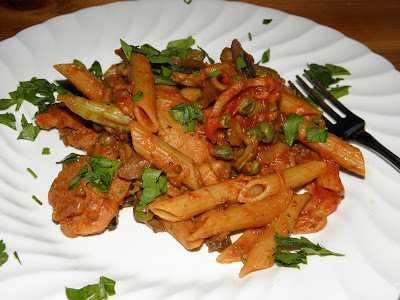 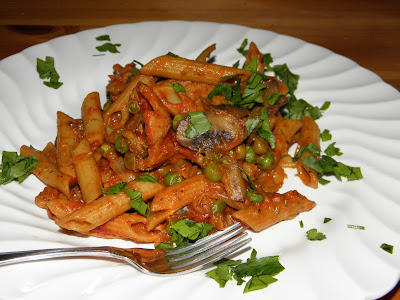 Hope this made your mouth water.  It was delicious!
Posted by Marty at 5:03 PM