Where to go?  Where to go?  After attending a party for the parents of students in my daughters class, where there was vegan sushi and hummus and pita, we wandered around Duane and Reade heading north.  Thank the app gods for my VegOut app.  It offers up Mexican Radio on Cleveland Place.  Since I figure I can always find something at a Mexican place and have no idea where Cleveland Place is I just figure adventure awaits.

The menu has some vegan options clearly marked and I'm a happy camper with vegan cheese and seitan on the menu.  I asked a few questions of our waiter and much to his credit, didn't wing it but gave me the much appreciated, "I'll have to ask," response.  Of course you think in a place serving vegan food the waitstaff would know but awareness is halfway to the goal and it's always good to know the people who you're talking to know what they don't know.

You know, yes, judging from the photo it was pretty dark in the back corner table.  I hadn't shlepped my big bulky camera to the party so didn't have it and it's mega flash for dinner but luckily for you, dear readers, I had my iPhone and of course I always carry a small flashlight in my pocket so yes, when you do ask if I'm happy to see you or is that a small flashlight in my pocket ...

The nachos were beany-not mashed and refried but black beans on tortilla crisps.  As you can see the cheese wasn't really melted and gooey.  Oh Daiya, where are you?  Or was it just rushed out of the broiler?
The jalapenos really weren't that hot but there were a few bottles of hot sauce on the table to remedy that lack of scovillety.

The enchilada was fine.  It was totally adequate but nothing exemplary.  Actually, I think that's rather fine.  Putting seitan in a middle of the road enchilada with vegan mole sauce will get me back into your restaurant much faster than just serving me a better tasting bean and rice burrito after omitting the things I don't eat, like animals and cheese.  At least you're making the effort. 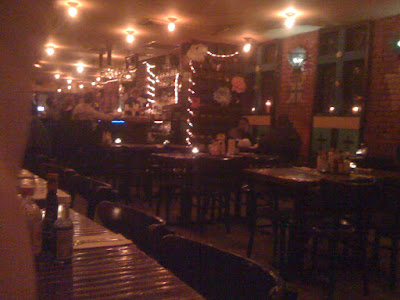 Another thing that will draw me back, especially on a day off, is the extensive tequila list.  Anejo, reposado, and blanco's abound.  We always enjoy comparing since I've noticed a variance between batches of the same brand and we enjoyed Mejor and Patron that night.  The bar is a warm and woody environment which I enjoyed much more than some of the slick new places around.

I'll definitely keep Mexican Radio on the list and perhaps go there during the day when a) the pictures will be better and b) I'm a bit less tired.