I just wanted to get these out before our trip back east today.


Just wandering around today in search of a quick easy vegan lunch and then a really nice, (should I say inexpensive ... no, not here in Jackson,) vegan dinner.  For lunch I was on my own and ate at Betty Rock.  It's a modernish cafe, no mis-matching furniture here.  The menu was extensive but there were only a few vegan options. 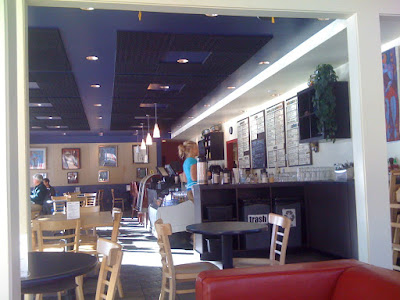 Just a wrap place, some paninis and sandwiches and pizza but I needed to chill out and get some blogging out of the way.  The counter girl told me everything was made to order so adding or taking away anything was easy.
I got the Roasted Veggie Panini with eggplant, red onion, red peppers, yellow squash and zucchini in a vinagarette. 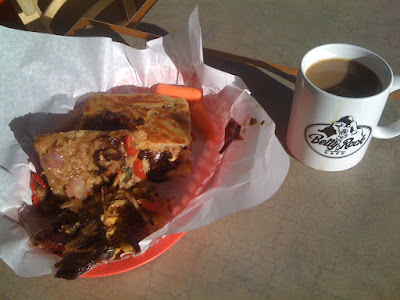 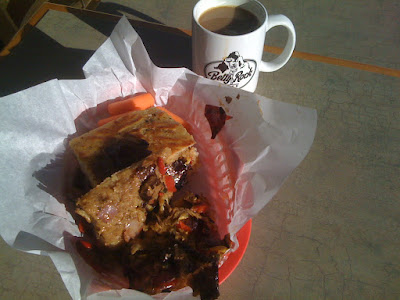 The bread had a nice crackle and was the perfect consistency to take a bite out of and yet not too crunchy to spray the sandwich contents out of the sides.  It was grilled in olive oil, (a tad on the oily side I think), not on a dry panini press.  The veggies were sweet and cooked just right.
Perfect for a quick lunch and some internet time.
I asked the countergirl why no vegan cheese and she said I was the first to ask.  They did have soy milk for the coffee, not creamer but hey, one step at a time.  Folks, ask.  Ask for vegan cheese, ask for vegan creamer, ask, ask, ask.  Or we’ll never get the answers we want at non vegan places.
Dinner was at the Lotus Cafe, Jackson, WY
http://tetonlotuscafe.com/
I convinced my partner in crime that they had meat to eat and he'd be ok.  They do have Pastrami and Ruben sandwiches, (can substitute tempeh in the Ruben Sandwich), and anyplace that serves tempeh in addition to tofu gets another check mark on my scorecard.  Tons of places can toss tofu into a veggie dish but once you know about marinating and grilling tempeh, seitan can't be far behind and then we have a small culinary epiphany.  I'm not sure I saw seitan on any menu in Jackson actually.


The place is a bakery/cafe/restaurant and has that physical feel of trying to be all three.  It's a nice unslick and cozy place.  There was a table of students on laptops with open texts when we arrived.  Sorry for the blurry pics but I took this one handed on my phone as we were leaving.

I ordered a fresh juice called a

Parsley, celery, broccoli,
kale, green apple & lemon
although I forgot to take a picture of it.  It was a glass of green stuff and although I didn't think I'd like the lemon it all worked really well together.


The samosas had an interesting outer layer.  They weren't as "puffy" a dough as I've had before but thinner and crispier.  The potato filling was peppery and I couldn't figure out where the heat was coming from ... see the caption below though.  That was a fig chutney and ginger sesame dipping sauce.
For my entree I ordered

Celery, carrot, garlic, & ginger.
Served with steamed kale, brown
basmati rice, & sesame-ginger sauce.  $12.99
The dish was nicely balanced with typical indian flavors but like much of the food I had out here was a bit muted.  I added some hot sauce from the table.  It was nice to see tempeh on the menu and that kale didn't last long on the plate. 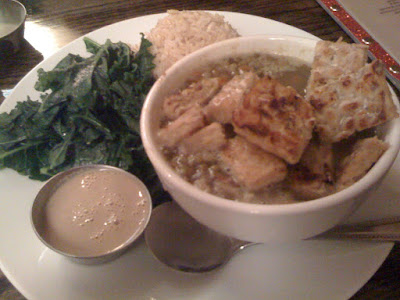 I really like the Lotus Cafe and I think if I spent much time in Jackson this would quickly turn into my go to place.  They were running a two for one Indian dinner special and I should have ordered another dish but just don't like when food goes to waste.  The other two dishes were also rice dishes and one rice dish was enough for me.


I would have liked to have tried the in house veggie burger as that's become a quest of mine and there are many other vegan options for breakfast, lunch and dinner using tofu and tempeh.  Hopefully this won't be my last trip to Jackson.