Pyramid Bistro in Aspen a hit, (and a miss), a hit and a hike.

I tried the Pyramid Bistro my first night here but the restaurant was closed due to the Nutritarian Event hosting Dr. Fuhrman.  It's his book being read by the chap in the photo above.  I actually saw a crusted tempeh dish I was thinking about and a day later with that dish in mind sat down at the Pyramid.  No tempeh dish. Oh well, craving greens in any format and fooling myself into thinking crispy kale is the same as raw kale I went with the kale chips.

The kale was really nice.  Crispy with a nice cashew/nutritional yeasty/cheesy flavor.  The ginger soy dip was refreshing, adding a nice bite and counterpoint to the cheese-ish flavor.  The one problem with kale chips is that by the time you're at the bottom of the bowl there are tiny kale flakes mixed in with kale dust.  Ah, the move was to incorporate the remaining soy dip with the remnants.  Ah, that could have been a dish unto itself!  Ah. 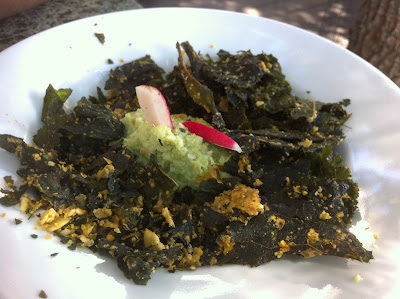 None of the salads or entrees struck a chord so I decided to make it a light lunch.  I haven't had a light lunch since about 50 pounds ago so I thought it would also serve to ease me into my anti-gluttony campaign.  I went with the Thai Curry Soup. 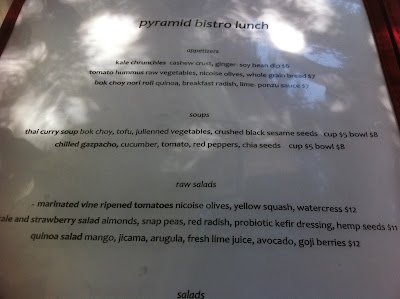 Ah, it looked so promising.  Sadly, and I hate to say it, I wasn't a big fan of the taste.  At all.  It tasted like a "greensy" broth pretty much overpowering everything else.  I had a few spoonfuls but then just called over Michael the waiter.  It had what I was pretty sure were collards, (but hey, could have been some other kind of green), and not the bok choy.  Michael said it was kale.  Now I'm not sure why if he knew there was a substitution it he didn't mention it to me but I'm pretty sure it wasn't kale.  No big deal. I love kale.  Collards, to me, have to be sauteed in an oil with garlic and onions to begin to become edible.  I do cook them from time to time but I looooove kale.  Anyway, I sent the dish back.

Now just to be fair, I found out Chef Martin Olwald, who owns the place, was pretty much tied up with the Nutritarian Event.  I started looking over the brochure and one of my heros, Dr. Joel Fuhrman, (www.drfuhrman.com), who advocates a pretty much vegan diet, was in Aspen also.  Eeek.  It was like $3000 to have lunch with him.  I know it was a fundraiser for the nutritionalresearch.org but that's way out of my league.  Ah, but $50 to attend the event, which was like a cook-off of some of the renowned local chefs doing vegan dishes.  Hey, for $50 bucks I can be a sport.  I'll blog about that another day because there's LOTs to say.

OK, back to lunch.  Chef Martin wasn't there.  I don't think he would have let that out of the kitchen.


Soooooo, I traded that in for the Gazpacho.  Now I have to tell you that as bad as the first soup was, this was so good that if I had two spoons I would have eaten it twice as fast.  It was bright, crisp, had a nice bite from the garlic, the tomatoes weren't pureed to excess and left it with several nice chunky bits of tomato.  Perfect.


Here are a few shots of the town and the slopes. 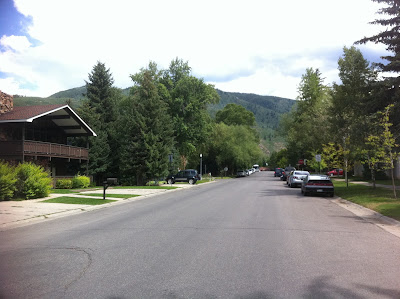 There are a few streams that define, in my mind, "Cool Rocky Mountain Stream." 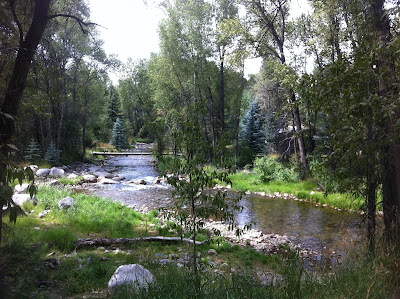 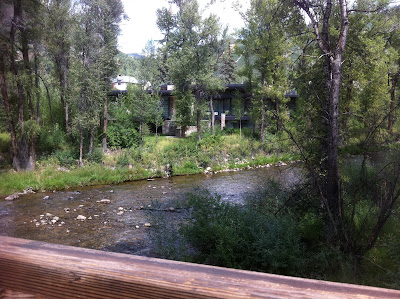 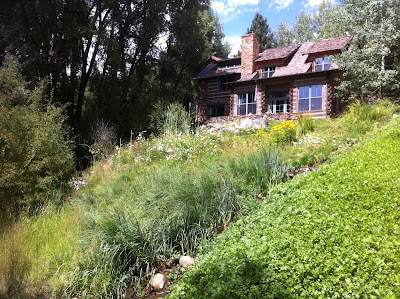 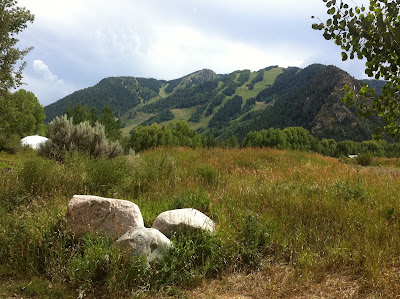 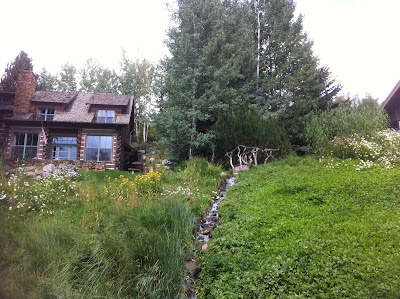 Interestingly enough, the Privaté family seems to live in all of these home.

Aspen is a really nice place to spend a few paid for days in the summer.  I have never been here more than an hour and definitely would consider coming here just to chill out on a vacation.

And I look forward to one day eating at the Pyramid when Chef Martin does his thing.

- Click "Claim your blog" in the left sidebar
After you submit it, we may contact you to verify your claim. Check your spam email folder if your claim hasn't gone through in a day or two. You'll also find some interesting badges and widgets on your Urbanspoon blog page - look in the right sidebar.
Let me know if you have any questions.
Thanks,
Ken
www.urbanspoon.com