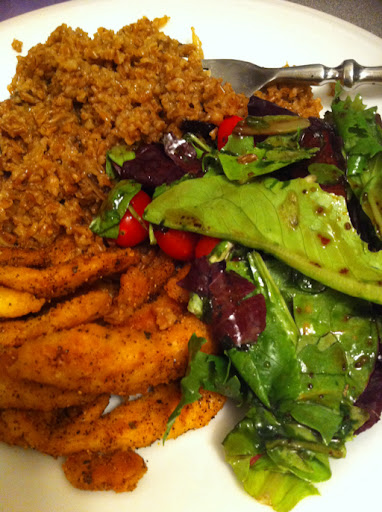 Bulgur Wheat.  Just sitting around.  Sauteed up some frozen shitake shrooms and onions, sauted for a few minutes then added garlic and porcini mushroom powder.  Mixed in some veggie broth base, added water and soy sauce and simmered covered for about 20 minutes, then let stand.

I had some hydrated soy curls,

(you definitely should click on the link and try a bag of these things!), from the night before which I had soaked in veggie broth, then breaded with a mixture of flour, paprika, cayenne, salt and pepper.  They spent the night in a baggie and were somewhat stuck together so I heated up some canola and one by one peeled each strip off the clump and laid it down in the oil.  I wanted something different and had a jar of Grill Masters Pork seasoning, (only vegan ingredients listed as it's basically a spice rub but you can make any kind of spice mix that suits your palate), and while it was cooking I liberally tossed on the spices.  I flipped the soy curls and after they turned a golden brown and put their crisp on put them on a paper towel to drain.

The salad was mixed greens, mixed pepper batons and grape tomatoes with a Maple Farms Fat Free Balsamic Vinaigrette.  Actually, I had some flavored tofu I wanted to get rid of also and heated that up in the microwave, sliced it up and laid that on top of the salad.  Then I ate it.  Then I decided to share my meal with you.