It's getting late, the place I had in mind closed at 9PM but when we got there at 20 to there was a private function going on and the place was closed.  We wandered down main street on our own.  I remembered the young lady in our hotel mentioning the Cantina as having a few vegan options, there was a sign saying "Cantina," so in we went.

It's a nice sized restaurant with plenty of room and we didn't have to wait for a table.

The one tequila I ordered seemed to be the one that they sold out of but they have an extensive list and I chose another with a frozen margarita.  I asked I asked our waitress, Katie, about vegan options after mindlessly perusing the menu and seeing everything I expected to see and mentally going through my options, vegetable fajitas, burrito with vegetables, (yes I have to ask about rice and chicken broth or beans and lard), how about this if I take away the cheese and meat, or that without ... another sigh and 20 questions, and was surprised when Katie, in her next breath, pointed out the "Vegan Mushroom Tower." Now I usually don't miss the word vegan on a menu but this was a nice surprise. 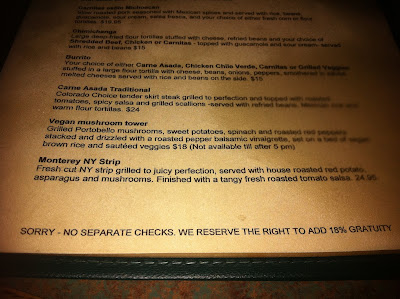 Right between the Carne Asada and the NY Strip.  Maybe that's why I skipped over it.  If you can't read the menu here's what it says:

And here's what it looks like.  I couldn't really tell how colorful the dish was until the flash went off as the restaurant was a bit dark.  I was very impressed.  The broccoli, squash, carrots and peppers were sauteed in oil, seasoned gently and had a perfect cooked and slight crunch texture.  The rice was a brown rice and wasn't particularly seasoned but laid a nice bedrock for the star of the place. 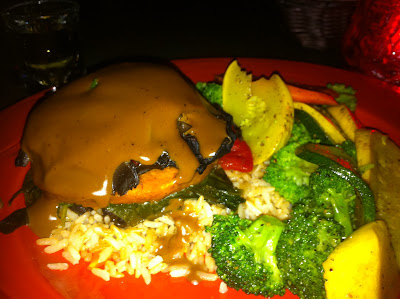 But before we get to the tower I want to tell a little aside about hot sauce.  I asked the server who brought our meals for some hot sauce and her inquiry was Tabasco?  Chaloula? Nah, what's the hottest thing you have.  So she brought me this tiny cup of sauce, home made, and I dipped a chip and ate and after my eyes stopped tearing and my throat opened back up I ate some more.  (Go figure).  It was awesome.  Too bad I ran out of patience to troubleshoot why the flash wasn't going off but here's a dark picture of it.  I found out that the chef makes a lot of hot sauces.  Just ask for what you like.  (As an aside, my carnivore buddy ordered a dish that had hot sauce which he felt straddled the line of too hot). 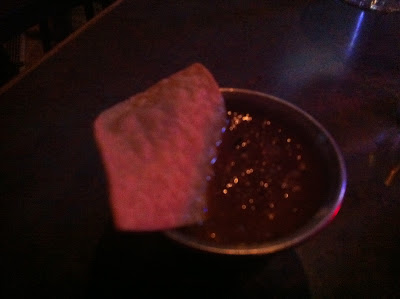 The tower had layers and layers.  Spinach, (sauteed soft but not mushy), sweet potato slices, (once again, cooked with just the perfect amount of bite remaining, roasted peppers and of course, portobello slices.  The only critique is that I wish the portobello was as thick as the sweet potato.  It sort of got a little lost.  But on top of that all was the most amazing balsamic/mustard reduction.  All I can say, stupidly enough, is, "Mmmmm."

I was so glad to see the word vegan on the menu and the entree had a really nice flavor profile and texture diversity.  I'd order it again in a heartbeat but the only thing was, I don't think it was "Mexican."  It's not a big deal, I'm just saying. It was a really nice change from my low expectations of the usual vegan fallback of rice, beans, and veggies in a burrito.