The Wedding Weekend or mix yoga and chocolate, NYC

My brother and niece came into NYC for the start of a wedding weekend commencing in Middlebury, Vermont. I had to work on their first day in but we were going to meet up for dinner at Max Brenner's The Bald Chocolate Man later that day. I have a blog post about my dinner there last summer.  At that time my only option was a Dr. Praeger Vegan burger and I wanted a bit more than that so to cover my bases I went to the amazing Juvimakti Yoga Center at 841 Broadway, (the same address as Max Brenner's).

Since I like spicy I once again opted for the Burrito Diablo.

In for a penny, in for a pound I also get myself a healthy smoothie.  I go out on a limb because dates aren't my favorite and order the Love. Just to make sure I get my daily dose of micronutrients I add a side of kale into the juice. 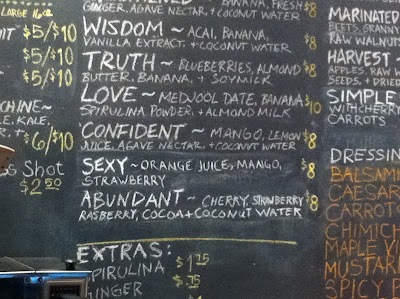 This was surprisingly sweet, or not so surprisingly if you think about dates and bananas being sweet.  If nothing else it's possibly the greenest thing I ever drank.  It was thick, rich and the predominant flavor was indeed banana.
Now just to be sure I wasn't missing anything I did ask about vegan options at Max's place.  Once again, the only thing was the burger, plain, because even the buns weren't vegan.  The waiter also recommended the Mediterranean combination appetizer since it had hummus, roasted Spanish eggplant and babaganoush.  He did say the baba had mayo in it but when another waitress came over with the dish and told us since she knew there was a vegan at the table, mentioned that the hummus was from Sabra and she was pretty sure it wasn't vegan.  So that left the Spanish eggplant dip.  It had a nice smoky flavor.  I asked if the pita chips were were slathered in butter or oil.  Waiter checked, said no go for me, and brought a basket of plain untoasted pita bread.  (Note to chef:  can you not toast pita chips without butter?)  OK, at least we caught that one.

Mediterranean Trio & Crispy Spice Dusted Pita Chips / Individual
creamy hummus, spanish eggplant dip, classic babaganoosh
In writing this here's another thought.  I just noticed they had pizza.  (I did know they had a chocolate and marshmallow pizza but not regular ones).  Now I wouldn't in a million years be in New York City and buy pizza from a chocolate place, (and this is from Ask.com from 2007: The NYC Dept of Health and Mental Hygiene lists 1250 restaurants with the word "pizza" in the restaurant name). I might have considered putting together a cheeseless pizza had the suggestion been made.  Unless of course the dough wasn't vegan.  I know, I know, pizza dough should be but some places put the strangest things in the strangest of places.

So after everyone else's meal was served I took out my Diablo burrito with it's fresh mixed greens salad, (no there was just romaine from the Caesar and regular salad on the Max menu, nothing really "greeny"), and gingery dressing. 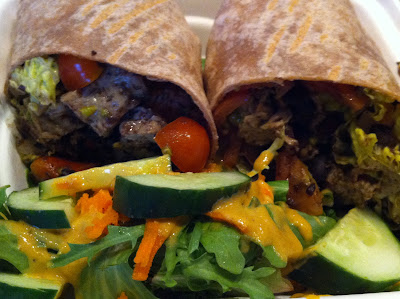 Since the ingredients are listed in the picture of the menu board I'll just say it was a perfect mixture of textures with the soft beans and the crunch of the lettuce, and the soft meatiness of the seitan.  There was a creamy sauce which went very nicely with the smokiness of the grilled seitan.  And the seitan was perfectly made with just the right amount of chew and sear.  An excellent meal thanks to Jivamukti Cafe. 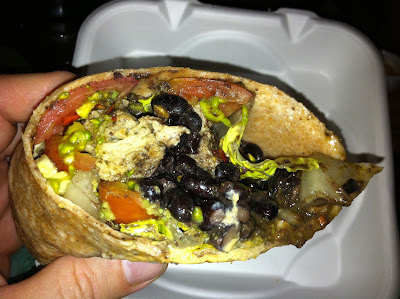 Here's the bottom line.  Max Brenner's is a tourist destination.  It's a pretty cool looking place with pipes running across the ceiling labeled with chocolate signs, cauldrons galore of chocolate and a chocolate shop to boot.  (Why not one of the options is made without milk I'll never figure out, even the dark chocolate isn't vegan).  It's not a fine dining restaurant and although there is a vegan option on the menu it's very hard to zero in on without twenty questions.  For what you end up with, (naked veggie burger on a plate), as a vegan, it's a very low return.

Take everyone to the Cafe next door, eat a healthy delicious meal, and then if you truly must, go buy a bar of chocolate one door to the North.
Posted by Marty at 7:37 AM