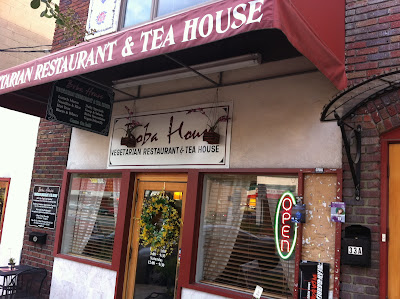 Boba House is a very pleasant double storefront restaurant in Greensboro.  Not all of the food is vegan but all food is marked that can be made vegan.  I think most of the items are but just to make sure you discuss with your server they put a "v" next to almost everything.  It's a good idea to make sure you don't have eggs or such in your food.  Our first waiter was a little less knowledgable than our second waitress, although both were very nice as were all the staff, not that we replaced one with the other but internal staff discussions apparently led to the staff swap so we ended up with our very own vegan waitress. 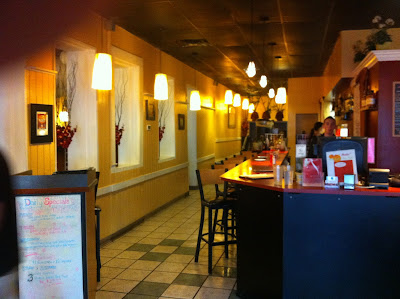 Since everything I ordered is vegan I'm just going to use the "mock" names.  We started out with the shrimp and the fried Spring Rolls.

I thought the shrimp were a little rubbery and gelatinous.  The first piece had a bit of hard and crunchy areas but others were fine.   So to speak.  Served with a light vinaigrette. 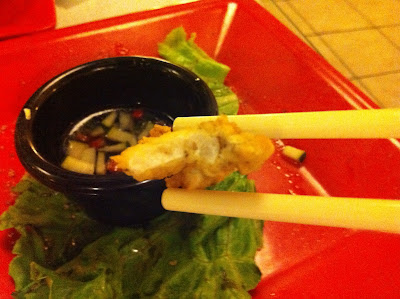 Spring rolls had a nice crunch on the outside and a good flavor. Insides were a bit soft but really the problem was they weren't heated all the way thought.  This tasted very much like pre-made commercial fare.  I can't see why a kitchen wouldn't prepare something like spring rolls from scratch.  I was so disappointed in the starters that I wasn't looking forward to the entree.

Boy was I wrong.  These were two of the most delicious entrees I've had.  The fish dish was amazingly close to tasting like the sea.  It pushed the border of "fishy" but didn't cross it, in a delicious sweet savory spicy brown sauce with garlic and ginger pieces.  The asparagus were perfectly cooked and I made the mistake of forgetting to get brown instead of white rice but it was as fluffy and light as white rice ever can be.


Blackened "Tuna"
Filets of "tuna" coated with dry spices and seared, and then simmered in a medium-spicy sauce.
The next dish I ordered was the Hula Pot.  I asked for it just shy of brain damaged and it was so deliciously hot yet the levels of flavor came through wonderfully.  It is served in what I can only describe as in two parts.  There is a bowl of broth and veggies and "duck" and a separate plate of noodles and assorted other accoutrements.  I, of course having no self control, just dumped it all in since there was nothing on the ingredient plate that I didn't care for.

This had a curry, spicy, lemony, earthy flavor and I was glad the "to go" container was relatively waterproof as it only got better in the next 2 days as a leftover meal.

Hula Pot
A sweet, aromatic curry served with rice or noodle, and your choice of vegetable, tofu, or "duck" made mild, spicy, or brain damage!
The dessert did me in.  It was a cake sandwich with amazingly soft and light filling.  I didn't see it on the menu but this was a chocolaty chocolate oreo kind of thing that in an instant ruins all the healthy goodness that you try so hard to put into your body.  If I could get this locally I swear I'd be a contestant on "The Biggest Loser" it was that good.

Looks delish! Reminiscent of Franchia? I love vegan asian-fusion! And yeah, I would have thrown it all away for that dessert, too ;)

I haven't been to Franchia in so long. I have about 10 reviews that I need to catch up on. I do seem to be honing my palate memory though.

It becomes a choice between just throwing up a few pics with a sentence or two about each one or actually spending a few hours on each post. Tough choice as I have among others; Sublime, Pepper Tree, John Bozeman's Bistro, Brixx Pizza, Lotus Vegetarian in VA, and NYC's own Soft Serve.

I liked this place but I've had better. I would go again. I had the pepper sauce on "chicken" and the sauce was very yummy. We shared the combo appetizer and I have to say the spring rolls (not fried) were delish along with the satay. The satay reminded me of Green Melody (violins playing for the closed restaurant). I'd definitely go back but I wouldn't take the 1 1/2 ride to just go to eat there. The location is cool being right by the University and the block it is on appears to have a bunch of cool stores. If you're flying there let me know; YOU'RE worth the trip. :)