The Pizza Conversion, dinner and outreach at Zesty's Pizza in NYC

On day one of my brother and nieces visit, the start of "wedding weekend," his California borne craving was for New York Pizza.  We picked Zesty's Pizza on 3rd Ave and 95th Street.  Just on a whim, I grabbed a sealed bag of Daiya Cheese and off we went.  I figured I'd at least be able to get a salad or something.

Zesty's has nothing vegan.  There is no pizza without cheese.  I asked.  It's busy, noisy, and amongst the employees it seems that English was the second language.  All those factors made a vegan education for the manager, (owner), something that wasn't going to happen at that moment but I did ask the person who seemed to be the manager a few questions.

Then he said he'd make a pie from scratch and asked for the cheese.  I watched as a dough tin was opened, cut in half, flattened, sauced, and spread with about 3/4 of the package of cheese.  I worried that it would burn in a pizza oven set to (what?) 800 degrees?  Or is that just wood burning? I didn't want my experiment to become a charred mass of ugliness.  It wasn't. It was the best pizza I've ever had in my life. 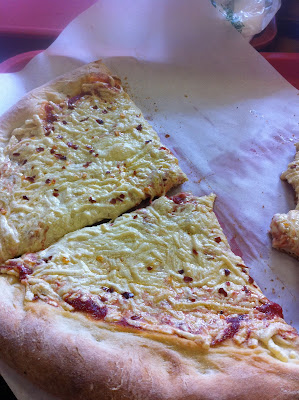 When the pie was cut I gave a slice to the manager.  I think he was impressed that it didn't taste like cardboard and was so creamy and stringy.

I also gave him the package with the remaining Daiya cheese.  (Hey Daiya!  Do I get a commission when your sales take off on the Upper East Side of Manhattan?)

Now when this wedding weekend in Vermont is over and things return to normal I'm going back at a quiet time to talk about veganism, lactose intolerance, and opening up a new target market or two using Daiya cheese.

that looks delicious indeed! I wish every pizza place in NYC would start offering vegan cheese (I forget, have you tried Vinnie's in Brooklyn? so good)

While I understand you not wanting to food to be wasted - I'm sure I'd be pretty upset as a customer if someone gave me a slice of pizza that looked like the cheese had been pulled off and then put back on! Maybe an employee ate it for a snack later though ;)

I haven't been to Vinnie's yet Ali. Which one and where? I'll put it on my list.

You know, I thought about what I read and you're right, of course that slice was trash! Then again with the amount of toppings on some of those slices you might never know.

That's right by my hood! Yea, Zesty is a real neighbory pizza joint. Usually, the manager would not customize your pizza like that. But he also learned something, too. :)